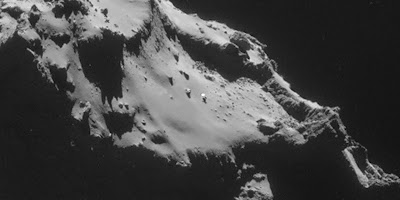 The European Space Agency (ESA) today [11-11-2014] confirmed that it was receiving a mysterious signal from Comet 67P/Churyumov-Gerasimenko. In a post on its live streaming website, it described the signal as a “mystery song” and uploaded a recording with the caption: “Hear our comet sing.”


The confirmation follows months of rumors that the Rosetta mission was originally sent to explore a radio signal from the comet first detected 20 years ago. The November 12 landing of the Rosetta mission’s Philae probe will be live streamed to the world.

The ESA’s surprise announcement hints that the significance of the landing may go well beyond the historic first of humanity landing a probe on a comet.

Rosetta’s Plasma Consortium (RPC) has uncovered a mysterious ‘song’ that Comet 67P/Churyumov-Gerasimenko is singing into space. The comet seems to be emitting a ‘song’ in the form of oscillations in the magnetic field in the comet’s environment. It is being sung at 40-50 millihertz, far below human hearing. To make the music audible to the human ear, the frequencies have been increased in this recording. 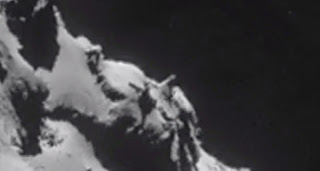 The mystery signal is in fact “a song” being transmitted by the comet, presumably an oscillation in its magnetic field according to the ESA. The ESA did not say when it first recorded the song, but it does lend plausibility to the claims of the anonymous ESA whistleblower. [Original email here]. The big question now is whether the song is a random composition of nature as the ESA implies, or was created by an extraterrestrial intelligence. 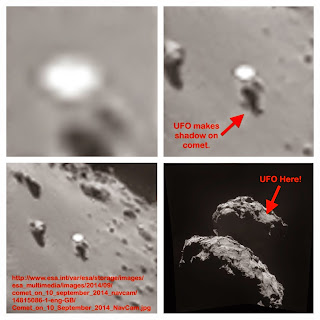 A September 10 photo from the Rosetta mission showed what appeared to be a radio tower and a possible UFO on the surface of Comet 67P. The photo was one among others held by the ESA that the anonymous ESA whistleblower referred to as revealing some of the mystery behind Comet 67P. Could the alleged tower be the source of the mystery signal, and does the UFO suggest an extraterrestrial intelligence is involved?


If the mystery signal today confirmed by the ESA was detected 20 years ago and led to the Rosetta mission, then it stands to reason that NASA and ESA believed that the signal was more than a random composition by nature. If extraterrestrials are wanting to announce themselves to a disbelieving world, transmitting a beautiful song from a remote comet does appear to be an elegant form of First Contact.

ESA is set to attempt the risky landing on Wednesday, with the separation of the Philae lander planned for about 09.03 GMT and touch down occurring about seven hours later, at 16:02 GMT.

If successful, it will be the first time in the history of space exploration that a man-made object has made it to the surface of a comet.

Comet 67P/Churyumov-Gerasimenko is travelling through space at speeds of around 135,000 kilometers per hour, and it orbits the Sun every 6.45 years.

The Rosetta robotic probe will release the washing-machine-sized Philae probe from a distance of approximately 22.5 kilometers from the comet’s center.

During its 7-hour descent, the lander will take photos of the small (just four kilometers in diameter), comet and will analyze dust, gases and plasma emitted by the space object. Also, the lander will measure the presence of any magnetic field.

If the landing proves successful, it will take 28 minutes and 20 seconds for a signal from Philae, retranslated by Rosetta’s antennas, to reach the control station on Earth.

The chances of a successful landing are slim, because the surface of the comet is rough terrain consisting of craters, crevasses, cliffs up to 150 meters high and giant boulders. The one suitable landing site has been given a name – Agilkia; it’s an egg-shaped plateau measuring 900 by 600 meters.

Because the Churyumov-Gerasimenko comet is too small to have any significant gravity, the lander will attach itself to the surface using ice screws in each of its legs and fire two additional harpoons.

Though failing to anchor correctly on the comet, right before & after the landing, Philae has send his first pictures :

I’m on the surface but my harpoons did not fire. My team is hard at work now trying to determine why. #CometLanding
— Philae Lander (@Philae2014) November 12, 2014 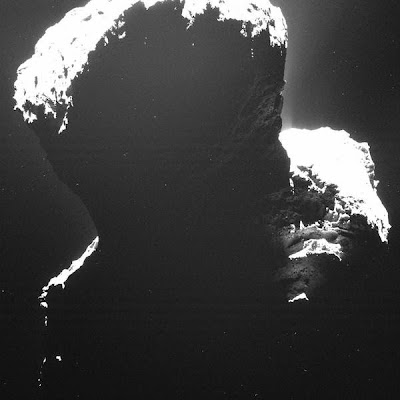 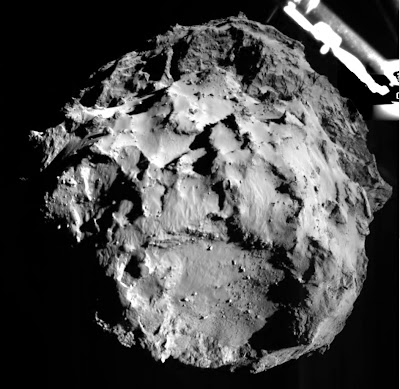 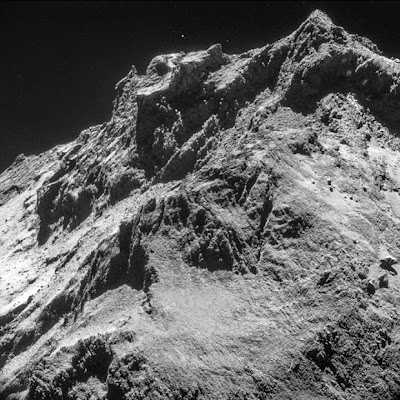 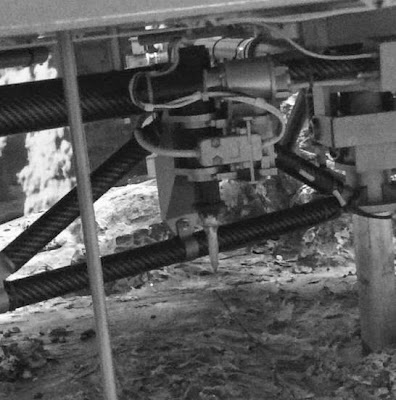 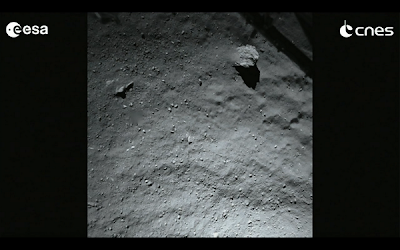 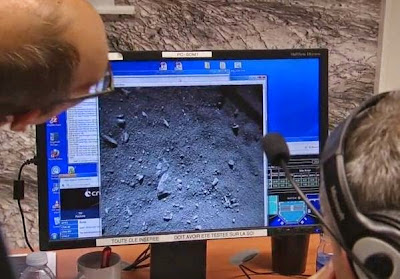 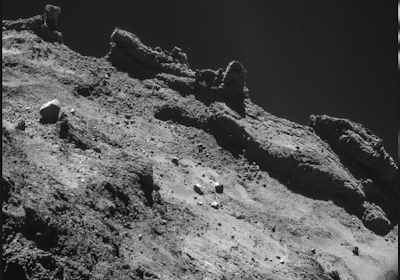