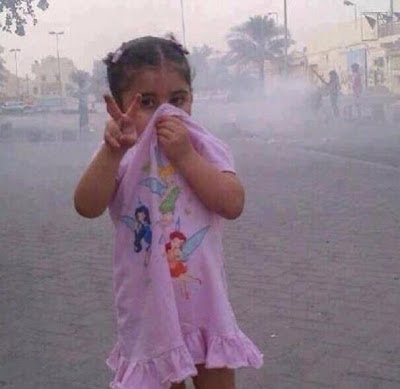 Also: an eyewitnessreport of the beginning of the protests wich are spreading at the moment. And Anonymous' efforts to help the people there.

With tens of thousands of protestors crossing by foot across the bridge connecting the Asian and European sides of the city it is clear that the protests in Istanbul and elsewhere in Turkey are intensifying.  News reports indicate that “police from as far afield as Antalya are being drafted in to help quell the violence.”

The Turkish government has clearly taken a hard line.  Prime Minister Erdogan is quoted by the BBC as saying, “Police were there (Taksim Square) yesterday; they’ll be on duty today and also tomorrow because Taksim Square cannot be an area where extremists are running wild.”

In fact, it is the police who seem to be “running wild,” using force excessively and indiscriminately.  Here is the latest from Amnesty:

"Friday night police used even greater levels of violence against demonstrators… There are unconfirmed reports of three deaths. Over 1000 people are thought to be injured, many of them seriously. More than 100 people have been detained in Istanbul. There are consistent reports of ill-treatment against those in detention.

Lawyers told Amnesty International that police beat protestors with truncheons when they apprehended them on the street, again at a police station close to Taksim. Similar violence against detainees was reported when protestors were transferred to the main security directorate in Istanbul.

According to reports, protestors on the street and in detention are being prevented access to appropriate medical care. Attempts by the Istanbul Medical Chamber to set up temporary medical facilities to treat injured demonstrators on the streets were prevented by continuous use of tear gas by police…

Medical professionals told Amnesty International that police security measures have also prevented many demonstrators from accessing the main public hospital in the Taksim area. Reports also indicate that the police fired tear gas close to the entrance to the hospital.

Reports also indicate that police apprehended injured demonstrators in need of hospital treatment and took them instead to police detention where they have not been able to access appropriate medical treatment."

Because Turkish authorities seem determined to continue on this course and have shown no inclination to “take the required steps to ensure the security of the demonstrators and members of the public in general,” Amnesty has updated its call to action.

Continue the actions outlined yesterday.  These include:

A. Use of social media:

Please use social media including twitter and facebook to circulate the below suggested messages, tagging @aforgutu for AI Turkey:


In addition, Amnesty asks that you lobby your own government

Call or e-mail your representative in Congress or Parliament.  Let them know that you expect your government to speak out for freedom of expression and against the police violence in Turkey.

Contact your country’s Foreign Affairs Ministry (the State Department in the United States) and ask them to reiterate Amnesty International’s call for:

•     Turkey’s Prime Minister to intervene immediately to end the police violence against           protestors;

•      The authorities to allow the right to peaceful protest of the demonstrators;

•      The end of ill-treatment during arrest and in places of detention;

•      Unhindered access to health care for all those who need it including in detention;

•      An immediate, independent and impartial investigation into allegations of excessive use of force and a clear statement of attrition.

New tweets have been issued in Turkish and English:

.@RT_Erdogan Turkish authorities must allow the right to peaceful protest of the demonstrators @aforgutu #direngeziparkı #occupygezi

Eyewitnessreport  from the beginning of the events.  What is Happenning in Istanbul? 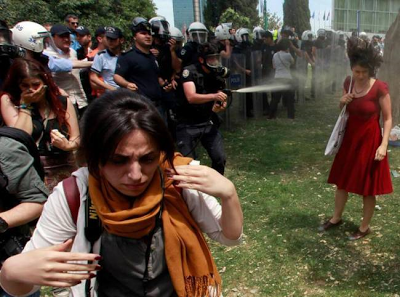 To my friends who live outside of Turkey:

I am writing to let you know what is going on in Istanbul for the last five days. I personally have to write this because most of the media sources are shut down by the government and the word of mouth and the internet are the only ways left for us to explain ourselves and call for help and support.
Four days ago a group of people most of whom did not belong to any specific organization or ideology got together in Istanbul’s Gezi Park. Among them there were many of my friends and students.  Their reason was simple: To prevent and protest the upcoming demolishing of the park for the sake of building yet another shopping mall at very center of the city. There are numerous shopping malls in Istanbul, at least one in every neighborhood! The tearing down of the trees was supposed to begin early Thursday morning. People went to the park with their blankets, books and children. They put their tents down and spent the night under the trees.  Early in the morning when the bulldozers started to pull the hundred-year-old trees out of the ground, they stood up against them to stop the operation.

They did nothing other than standing in front of the machines.

No newspaper, no television channel was there to report the protest. It was a complete media black out.
But the police arrived with water cannon vehicles and pepper spray.  They chased the crowds out of the park.
In the evening the number of protesters multiplied. So did the number of police forces around the park. Meanwhile local government of Istanbul shut down all the ways leading up to Taksim square where the Gezi Park is located. The metro was shut down, ferries were cancelled, roads were blocked.

Yet more and more people made their way up to the center of the city by walking. 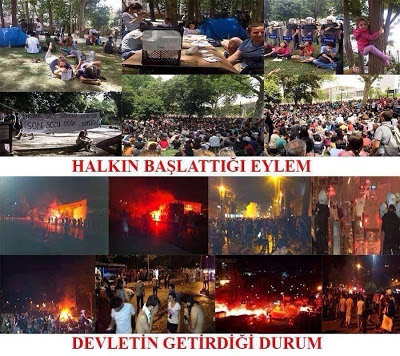 They gathered and marched. Police chased them with pepper spray and tear gas and drove their tanks over people who offered the police food in return. Two young people were run over by the panzers and were killed. Another young woman, a friend of mine, was hit in the head by one of the incoming tear gas canisters. The police were shooting them straight into the crowd.  After a three hour operation she is still in Intensive Care Unit and in  very critical condition. As I write this we don’t know if she is going to make it. This blog is dedicated to her.

These people are my friends. They are my students, my relatives. They have no «hidden agenda» as the state likes to say. Their agenda is out there. It is very clear. The whole country is being sold to corporations by the government, for the construction of malls, luxury condominiums, freeways, dams and nuclear plants. The government is looking for (and creating when necessary) any excuse to attack Syria against its people’s will.

On top of all that, the government control over its people’s personal lives has become unbearable as of late. The state, under its conservative agenda passed many laws and regulations concerning abortion, cesarean birth, sale and use of alcohol and even the color of lipstick worn by the airline stewardesses.

People who are marching to the center of Istanbul are demanding their right to live freely and receive justice, protection and respect from the State. They demand to be involved in the decision-making processes about the city they live in.

What they have received instead is excessive force and enormous amounts of tear gas shot straight into their faces. Three people lost their eyes.

Yet they still march. Hundred of thousands join them. Couple of more thousand passed the Bosporus Bridge on foot to support the people of Taksim.

No newspaper or TV channel was there to report the events. They were busy with broadcasting news about Miss Turkey and “the strangest cat of the world”.

Police kept chasing people and spraying them with pepper spray to an extent that stray dogs and cats were poisoned and died by it.

Schools, hospitals and even 5 star hotels around Taksim Square opened their doors to the injured. Doctors filled the classrooms and hotel rooms to provide first aid. Some police officers refused to spray innocent people with tear gas and quit their jobs. Around the square they placed jammers to prevent internet connection and 3g networks were blocked. Residents and businesses in the area provided free wireless network for the people on the streets. Restaurants offered food and water for free.

People in Ankara and İzmir gathered on the streets to support the resistance in Istanbul.

Mainstream media kept showing Miss Turkey and “the strangest cat of the world”.

***
I am writing this letter so that you know what is going on in Istanbul. Mass media will not tell you any of this. Not in my country at least. Please post as many as articles as you see on the Internet and spread the word.

As I was posting articles that explained what is happening in Istanbul on my Facebook page last night someone asked me the following question:

«What are you hoping to gain by complaining about our country to foreigners?»
This blog is my answer to her.

By so called «complaining» about my country I am hoping to gain:
Freedom of expression and speech,
Respect for human rights,

Control over the decisions I make concerning my on my body,
The right to legally congregate in any part of the city without being considered a terrorist.
But most of all by spreading the word to you, my friends who live in other parts of the world, I am hoping to get your awareness, support and help!

Please spread the word and share this blog.
Thank you!

For futher info and things you can do for help please see Amnesty International’s Call for Urgent Help.    [see previous text above [red] 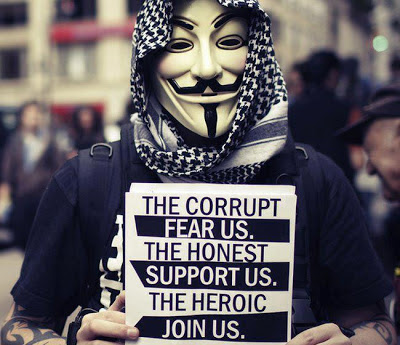 Greetings citizens of the world. We are Anonymous.

The whole world is watching this battle and we have heard the cries of the oppressed in this country. Anonymous does not stand idly by as governments crush opposition to their dictatorial rule. Thus, we are calling for all active anons to assist in #OpTurkey.
#OpTurkey ~ Survival tips for civilians in areas of urban conflict. Below is a guide written by ex-military aimed at assisting those on the streets fighting for their freedom. While many of these points seem obvious to some, the stress and chaos of the rebellion can dampen and confuse even the bravest of people at times. Thus, we strongly advise that you please review ALL points in their entirety.
Turkish government. You should expect us.
irc.anonops / #opturkey
#opturkey on Twitter
@anonsturkey

List of Damage under #OpTurkey; include (Leaks, Hacks and Defacement) 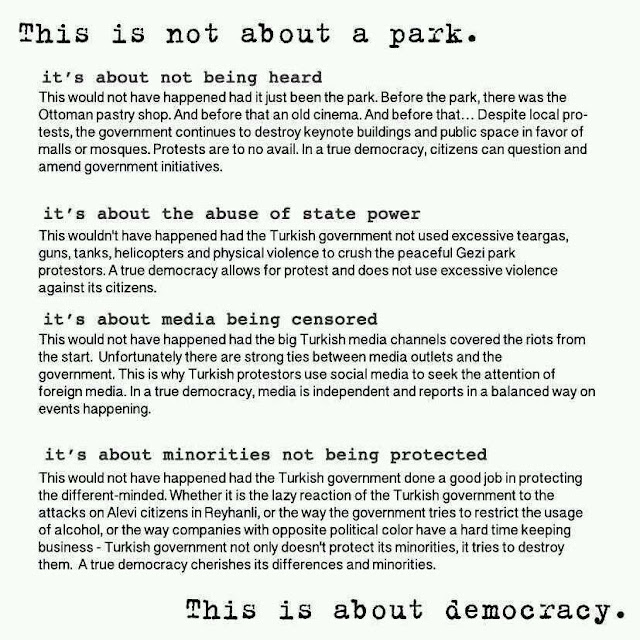 
“We will attack every Internet and communications asset of the Turkish government,” Anonymous threatened in a YouTube video posted Sunday. “You have censored social media and other communications of your people in order to suppress the knowledge of your crimes against them. Now Anonymous will shut you down, and your own people will remove you from power.”

Anonymous used distributed denial of service, or DDoS, hacks to overload servers and knock target websites offline. In addition to websites belonging to the Turkish government, political parties and police department, Anonymous hacked websites belonging to media outlets that support Prime Minister Tayyip Erdogan. One example was the private news broadcaster NTV, which was criticized for not reporting on the police brutality.

We are coming Turkey. Be strong, We will not let you down. Stay in the streets, We will take your government offline. #OpTurkey
â€” Anonymous(@AnonOpsMob) June 2, 2013


TANGODOWN:tccb.gov.tristanbul.gov.triem.gov.trAkparti.org.tr Via @wikicrew #YA
â€” Anonymous (@YourAnonNews) June 2, 2013
Other Turkish websites were hacked and defaced to include images supporting the protesters in Turkey. Several Tunisian hackers got involved with #OpTurkey and claim to have hacked more than 145 Turkish websites.

#OpTurkey chatroom and an other

How to connect to the internet in Turkey should your government shut it off. Please share with Turks. 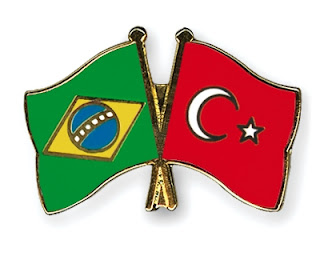