Master or Disaster: The Art of Living between Mind and No-mind

“A genuine spiritual path does not avoid difficulties or mistakes but leads us to the art of making mistakes wakefully, bringing them to the transformative power of our heart.” –Jack Kornfield

Your ego is an instrument, a tool, the primitive leveraging mechanism of the self. Some would even say it is the self. It is there to balance (master) or dissociate (disaster) our unique energy with the primordial energy of the cosmos. It is forever in the throes of connection and disconnection, of attachment and detachment, torn between finitude and infinity. When the ego is being used to dissociate, its energy is codependent and it is torn between bemoaning the past and being anxious about the future.

There is a woe-is-me attitude and self-pity is rampant. As a result unhealthy psychosis ensues. However, when the ego is being used to balance itself, its energy becomes interdependent, and it is liberated from the past and free to create the future. As a result a healthy enlightenment process ensues. There is an out-of-mind experience. Indeed, an above-mind experience of healthy detachment called No-mind.

Our modern day egos typically lean more towards dissociation, since the majority of us were raised in dysfunctional and dissociative cultures, and most of us are not even aware to what degree. Because of this, we are plagued with a plethora of psychological problems that grossly effect our ontological perceptions. In short: we are walking disasters.

To be human today is to be party to a perplexing existential illusion –that human individuals are independent agents– which exacts a heavy emotional and psychological toll on us. It is the source of all anxiety, envy, jealousy, anger and the violence that inevitably ensues. Modern Man is a troubled species indeed, he can only state what he is not; and what he positively is, remains obscure and shrouded in doubt. We have become dissociated from finite nature and infinite cosmos: our true self. And we are in need of healing. But as Lao Tzu cryptically opined, “New beginnings are often disguised as painful endings.” The ending of our rampant dissociation is a taming of our ego and a letting go of our attachment to the mind.

Here’s the thing: everything is connected. We all know this. Our boundaries are fluid and blurred. They aren’t even boundaries at all, just the illusion of a boundary. We are all profoundly linked in ways we can hardly fathom. Like Alan Watts said, “’To be or not to be’ is not the question — because you can’t have one without the other! Not-being implies being; just as being implies not-being. The existentialist in the West — who still trembles at the choice between being and not-being and therefore says that anxiety is ontological — hasn’t grasped this point yet. When the existentialist who trembles with anxiety before this choice realizes suddenly one day that not-being implies being, the trembling of anxiety turns into the shaking of laughter.” (See The Cosmic Joke). 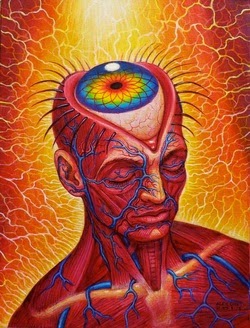 A master with high humor is needed to resolve the disaster of the self. This master lies dormant inside us all. It can only be found by having the out-of-mind experience of no-mind. There, in the stillness, the master is meditating. The master is connected to the source of all things, her thousand-petalled lotus spinning like a galaxy above her head. He/she is radiating inside of you, bursting with wisdom and nth-degree-questions. She pirouettes like Shakti. He foxtrots like Shiva.

He/she is the all-dancing, all-laughing oracle of the primordial self. And it can only be found there in the silence, between inhale and exhale, between being and non-being, between mind and no-mind. There, above thought, is the source of human creativity: the place where artists, poets, musicians, and even scientists have discovered the secrets of the universe. Like Leonard Cohen said, “You lose your grip, and then you slip into the masterpiece.”

What is truly needed to become a master of oneself in this life is the ability to disincarnate and incarnate at will, to dissolve the ego and also use the ego as a tool toward higher thought. Disincarnating is dissolving the ego and quieting the mind. Incarnating is leveraging the ego as a force of nature, using it as a tool for further exploration. In between is where the magic is, where Shakti and Shiva dance eternally. The human condition is like a snakeskin that we must constantly shed in order to embrace the new.

Looking at it this way helps us to stretch it, to open it a little wider; a kind of evolutionary self-permeability that makes us more spiritually flexible. The way we do this is first realizing that we are not our mind or our ego. We are our Consciousness. We are the unique-as-our-own-fingerprint wave of consciousness curling out of the cosmic ocean. Our ego, our mind, is just as much a tool of our consciousness as our body is. In short: we have to be able to lose our mind and then retrieve it – and we have to do this over and over again, like breathing in and out: inhale –lose mind; exhale –retrieve mind. Like Eckhart Tolle said, “Thinking and consciousness are not synonymous. Thinking is only a small aspect of consciousness. Thought cannot exist without consciousness, but consciousness does not need thought.” 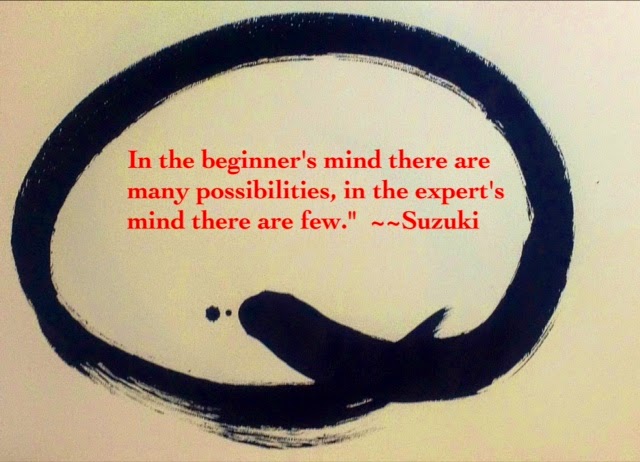 Beginner-mind begets learned-mind begets master-complex which must be subsumed by beginner-mind in order to achieve self-actualized-mind, thereby renewing the cycle. Being a master is learning how to unlearn. Being a disaster is not questioning what you’ve learned and believing in it blindly. And it’s okay if so far you’ve been a disaster. The first step is accepting it, so that you can begin to liberate yourself from the clutches of fear that have held you back. It is your responsibility, and yours alone, to synchronize with your inner cyclic entropies so that you can achieve a place, an inner Locus of Control, where your super-serendipitous creativity is free to erupt into the world.

Like Firmin DeBrabander said, “The passions, Spinoza argued, derive from seeing people as autonomous individuals responsible for all the objectionable actions that issue from them. Understanding the interrelated nature of everyone and everything is the key to diminishing the passions and the havoc they wreak.” Indeed, for the same reason that you put an oxygen mask on yourself before a child, you discover a Locus of control before attempting to control the locusts. Thinking with ego less, and being conscious more, is the key to becoming a master. It’s not easy, by any means. It takes persistent discipline and constant practice. It takes existential vigilance and loving compassion toward the disastrous many. Remaining a disaster is easy. It just requires you to never question anything, especially not yourself; and to simply remain safe and secure in your tiny comfort zone babying your tiny spoiled ego.

There’s a tug-of-war going on inside each and every one of us. It’s between mind and no-mind, attachment and detachment, love and fear, responsibility and complacency, truth and deception, healthy and unhealthy. The list goes on and on. It’s been the same inner battle since the dawn of Man, and it’s fought best in the no-mind state of the detached master. Like e. e. cummings said, “To be nobody but yourself in a world which is doing its best, night and day, to make you everybody else, means to fight the hardest battle which any human being can fight; and never stop fighting.”