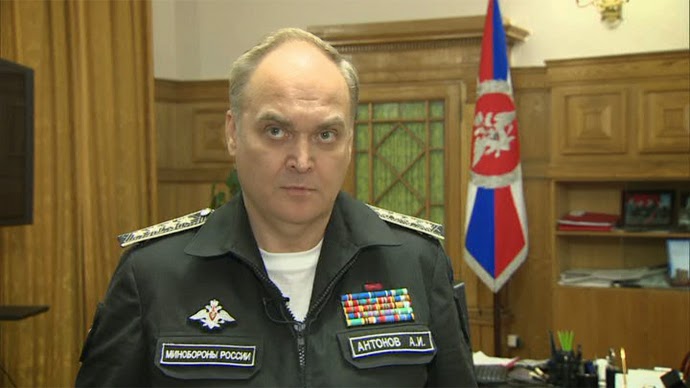 Some Western states and Kiev rushed to find Russian involvement in the MH17 crash having no evidence to back their claims, Russia’s Deputy Defense Minister told RT. He invited Ukraine to answer 10 questions to prove their commitment to an impartial probe.

Speaking to RT, Russia’s Deputy Defense Minister Anatoly Antonov has criticized Western countries for jumping to conclusions just “24 hours after the crash” while there is no evidence.

“They try to show to the whole world that we are responsible for the crash. It is very strange that without any evidence my colleagues from western media would like to find somebody who is responsible for the crash,” Antonov said. “It seems to me that this is part of information warfare which has been started against the Russian Federation and armed forces.”

TEN QUESTIONS FOR THE UKRAINIAN AUTHORITIES

1. Immediately after the tragedy, the Ukrainian authorities, naturally, blamed it on the self-defense forces. What are these accusations based on?

2. Can Kiev explain in detail how it uses Buk missile launchers in the conflict zone? And why were these systems deployed there in the first place, seeing as the self-defense forces don’t have any planes?

3. Why are the Ukrainian authorities not doing anything to set up an international commission? When will such a commission begin its work?

4. Would the Ukrainian Armed Forces be willing to let international investigators see the inventory of their air-to-air and surface-to-air missiles, including those used in SAM launchers?

5. Will the international commission have access to tracking data from reliable sources regarding the movements of Ukrainian warplanes on the day of the tragedy?

6. Why did Ukrainian air traffic controllers allow the plane to deviate from the regular route to the north, towards “the anti-terrorist operation zone”?

7. Why was airspace over the warzone not closed for civilian flights, especially since the area was not entirely covered by radar navigation systems?

8. How can official Kiev comment on reports in the social media, allegedly by a Spanish air traffic controller who works in Ukraine, that there were two Ukrainian military planes flying alongside the Boeing 777 over Ukrainian territory?

9. Why did Ukraine’s Security Service start working with the recordings of communications between Ukrainian air traffic controllers and the Boeing crew and with the data storage systems from Ukrainian radars without waiting for international investigators?

10. What lessons has Ukraine learned from a similar incident in 2001, when a Russian Tu-154 crashed into the Black Sea? Back then, the Ukrainian authorities denied any involvement on the part of Ukraine’s Armed Forces until irrefutable evidence proved official Kiev to be guilty.

On July 15, a division of Buk missile systems of the Armed Forces of Ukraine was deployed in the area of Donetsk. The firing range of the Buk missile system reaches 43 kilometers. The Boeing 777 of Malaysia Airlines was flying at the height of 10,600 kilometers. Representatives of the breakaway republics of Ukraine said that the militias had neither such weapons, nor skills for such an attack.

An aircraft flying at an altitude of 10,000 meters can be destroyed only with S-300 or Buk type of weapon. Militias do not can and can not have such systems at their disposal.

Kiev deployed powerful anti-air systems to E. Ukraine ahead of the Malaysian plane crash.
The Ukrainian military has several batteries of Buk surface-to-air missile systems with at least 27 launchers, capable of bringing down high-flying jets, in the Donetsk region where the Malaysian passenger plane crashed, Russian Defense Ministry said.

They were gonna fool a whole lot of people with this one! Thankfully, they have been caught!
The Ukraine Government supported a youtube clip that they say proves Russia had involvement and that Rebels shot down Malaysia Flight MH17. However, Due to their sloppy work, They have been caught! They have since tried to delete the file, but not before it was downloaded over 800 times!

Before all investigations even started, Hilarious Clinton knows who did it.

Update - 21 july:
Russian military unveil data on MH17 incident over Ukraine (FULL)
The Russian Defense Ministry holds a press conference on the details of MH17 crash in eastern Ukraine. Defense Ministry reports that on the day of the catastrophe, a Ukrainian SU-25 fighter jet gaining height towards the Boeing 777. Calling for Kiev to explain why the fighter jet was tracking the airplane & why BUK M1 surface to air missiles were deployed close to the crashregion at that day, because the 'rebels' do not have airplanes.
Why haven’t US officials revealed the evidence supporting claims that the MH17 was shot down by a missile launched by the militia?

“US officials claim they have satellite photographs proving the Malaysian airliner was shot down by a missile launched by the militia. But no one has seen these photographs so far. As far as we know, there was indeed a US satellite flying over southeastern Ukraine on July 17 from 17:06 to 17:21 Moscow time.
This satellite is part of an experimental system designed to track and monitor the launches of missiles of various ranges. If our US colleagues have imagery from this satellite, they should release it for the international community to examine it in detail. This may be a coincidence, but the US satellite flew over Ukraine at exactly the same time when the Malaysian airliner crashed.”


The Russian Defense Ministry holds a press conference on the details of MH17 crash in eastern Ukraine. Defense Ministry reports that on the day of the catastrophe, a Ukrainian SU-25 fighter jet gaining height towards the Boeing 777. Calling for Kiev to explain why the fighter jet was tracking the airplane.


Putin: MH17 shouldn't be used to achieve selfish political goals
The tragic Malaysian MH17 flight crash must not be politicized and the international experts on the scene should be able to carry out their work in complete safety, Russian President Vladimir Putin said.
"Such events should unite people, not separate them..No one has any right to use this tragedy for any kind of selfish politicized interests".

Update 27 aug 2014:
When Malaysia Airlines Flight 17 went down on July 17, 2014, we were immediately inundated with base propaganda trying to convince us that the shootdown could be traced back to the Kremlin. But what was this rush to judgement based on? What have we learned about the crash since then? Why has MH17 completely disappeared from the news cycle? And who really stood to benefit from the disaster? Find out the answers to these questions and more in this week's edition of The Corbett Report.

Investigating MH17:
Susan Ormiston sits down with Michael Bociurkiw, the Canadian who was part of the first international monitors at the MH17 crash site.

This is what a German pilot-cum-air technology expert Peter Haisenko has just published on the subject of the MH17 disaster (my emphases):
‘The misfortune of the Malaysian MH 017 is known to all. The flight recorder is in England and is being evaluated. What can come of this? May be more than you want to accept….if you look at the image of Cockpit-Fragments, this picture is certainly shocking."


Entry And Exit holes from bullets in the area of the Cockpit.
This is not speculation, but analysis of clear facts: the cockpit shows clear evidence of bullet holes. You can see the entry holes and some exit points. The edges of the bullet holes are bent inwards,  these are much smaller and round in shape. A 30mm calibre. The exit holes are less well formed and the edges are torn outwards.

Furthermore it is visible that the exit holes have torn the double aluminium skin and bent them outwards. That is to say, splinters from inside the cockpit blew through the outside of the cabin. The open rivets have also been bent outwards….There is only one conclusion one can make, and that is that this: the aircraft was not hit by a missile. The damage to the aircraft is exclusively in the cockpit area…. 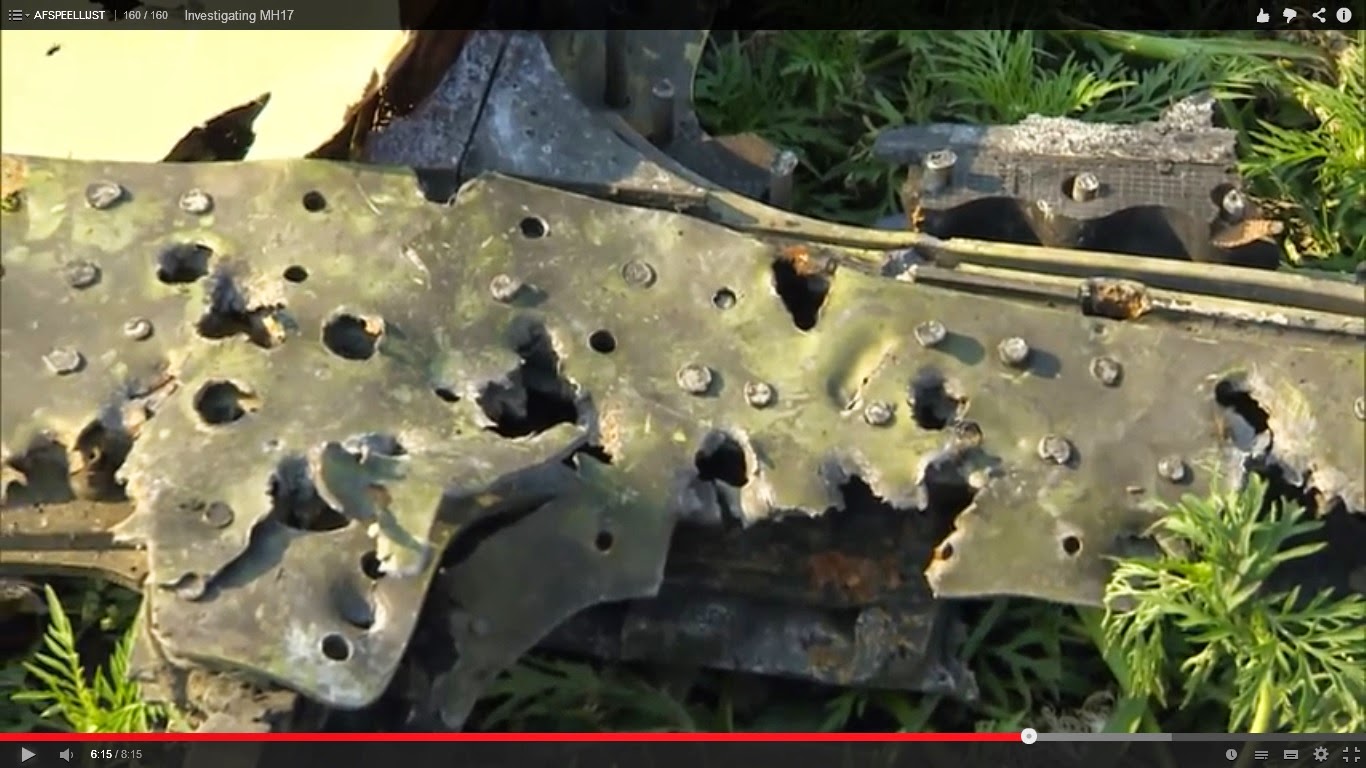 Russia has published radar data that a Ukranian SU 25 was close to MH 017. this corresponds with Spanish air traffic control that two Ukranian fighter aircraft were in direct contact with MH 017. Examine the weaponry of the SU 25: it is fitted out with a 30mm cannon Type GSch-302 /AO-17A, with 250 rounds of
splintering exploding bullets on a belt – shrapnel rounds. The cockpit of MH 017 was hit from TWO sides, as there are entry and exit holes on the same side….’
Very compelling stuff, is it not?
>>read more>>

Email ThisBlogThis!Share to TwitterShare to FacebookShare to Pinterest
Labels: MH17