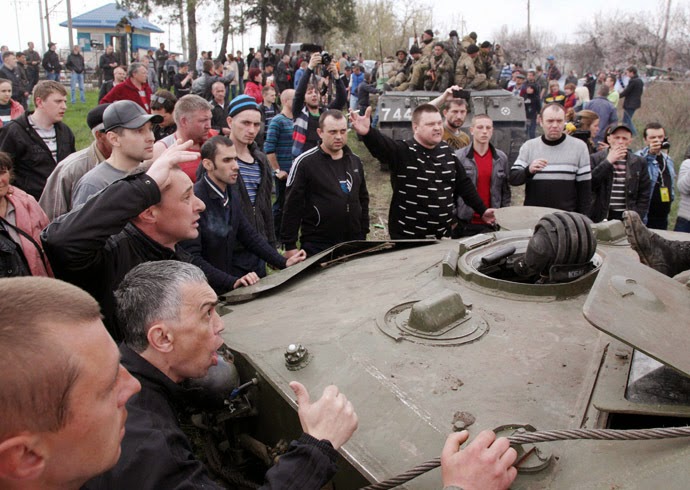 Kiev’s military faced off with protesters in east Ukraine on Wednesday to sort out their differences…and found none. Soldiers appeared reluctant to go into battle against anti-government activists.

When Ukrainian Armored Personnel Carriers (APCs) entered downtown Kramatorsk as part of Kiev’s military operation against anti-government protesters in the east of the country, they were stopped in their tracks, surrounded by crowds of local residents.

One YouTube video of what happened next shows a woman coming to a soldier with the reproach: “You are the army, you must protect the people.”

“We are not going to shoot, we weren’t even going to,” is the soldier’s reply.

Similar conversations could be heard at each of several APCs which entered the city, with locals promising to defend their neighbors, in case the soldiers start a military operation.


Military vehicles parked in downtown Kramatorsk have turned into hotspots for political discussion, with people beside the vehicles trying to get their views through to people on top of the tanks.

Another video features the Kramatorsk crowds loudly chanting “Army with the people” and applauding the soldiers as they were leaving their APCs.

"Guys, we are with you! You are great!” women are heard yelling to the vacating soldiers.

Around 60 crew members of Ukrainian armored vehicles sent to Kramatorsk for carrying out the military operation against anti-government protesters, have switched sides and joined the local self-defense squads, according to RIA Novosti, citing the self-defense leadership.

“We’ve seen here, that these are neither separatists nor terrorists, but ordinary local residents, with whom we are not going to go to battle,” one of the defected soldiers said.

All of the troops who decided to side with the self-defense come from the Dnepropetrovsk region, neighboring with the Donetsk one.

This YouTube video shows an encounter where some of the Ukrainian military vehicles raise Russian flags, while others raise the flags of the Donetsk People’s Republic that the supporters of federalization want to establish. The crowd reacted with loud cheers.

A video was later posted on YouTube of Ukrainian blocked by Kramatorsk residents at the local Malotaranovka railway crossing. The video does not show how many vehicles are in the convoy, but the author of the post suggests there are 15 of them.

Vladimir, a resident of Kramatorsk who witnessed the events, told RT in a phone call that a clear majority of the soldiers who arrived at Kramatorsk in armored vehicles were “boys of only 18-20 years old, with their heads freshly shaved as they had just entered military service.”

Immediately after the column of armored vehicles was blocked near the local market, local residents surrounded the column with a human chain, but did nothing more, Vladimir said.

“Both sides were simply standing there and smoking, waiting for God-knows-what. Then the local militia came to the scene, and asked the locals to step back and started negotiations. The soldiers were asked if they would like to surrender. They thought a little bit – and agreed,” Vladimir said.

The soldiers and civilians started fraternizing very quickly and soon were joking about “coming for a visit without weapons next time.” Many of the soldiers put on St. George’s ribbons, the traditional Russian emblem used to commemorate the Soviet Union’s fight against Nazism in World War II.

The tanks have already been driven away to a safe place by the local militia, the witness said.

Vladimir said that Kramatorsk was not under siege, but he confirmed that there were armed checkpoints throughout the city. Military helicopters have been flying over the city since Tuesday, when there were clashes at the local airport. The local Internet connection is extremely unstable and mobile networks has been functioning only intermittently over the last few days, he said.

Tuesday, when the military operation against anti-government protesters in the east was launched, was not as peaceful.

According to activists, four people were killed and two others injured when troops seized an airfield in Kramatorsk, which had earlier been controlled by protesters.


Dozens of Ukrainian troops surrender APCs in Slavyansk, refuse to ‘shoot at own people’ 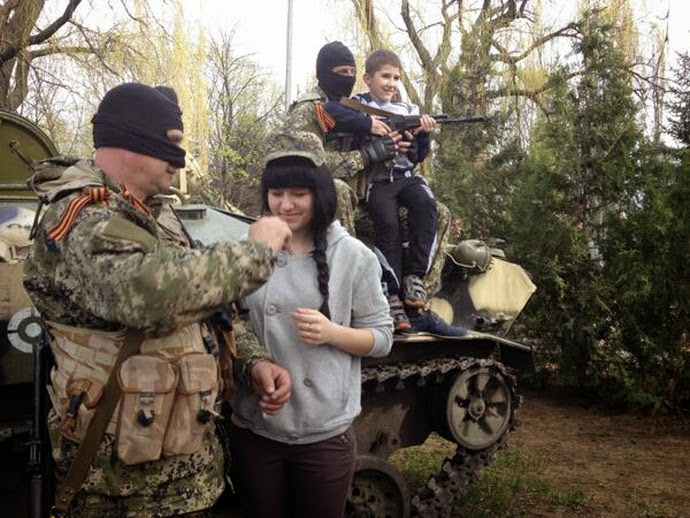 “We managed to negotiate with them. About 300 military – only some of those who closed around the city – decided to lay down their arms and go home,” a self-defense activist was quoted as saying.

Reports from the scene said that the locals would not allow the soldiers to take back the APCs, but they were allowed to keep their rifles. The people were cheering the troops.

Meanwhile, the anti-government activists guarding the armored vehicles have said that they did not “seize” them as the media claimed, and that the troops “switched sides” peacefully.

“They were not seized by the self-defense forces. In fact, the Ukrainian troops arrived here flying a Russian flag. In this way, they have taken the side of the people,” a Slavyansk activist told Russia-24 TV.

Photos from the scene now show women and children climbing onto the APCs and taking photos with the armed men in camouflage with St. George ribbons.

A Ukrainian soldier interviewed by RIA Novosti in Slavyansk said the troops were told they are being sent against “Russian invaders who have taken the local population hostage and are waging war at us,” and that they must “free Donbas from occupants.”

“This morning, we started our attack, but the picture we saw in Kramatorsk turned out to be completely different. We saw in front of us a crowd of locals, mostly adults, women and men. They explained to us that there are no occupants here and there is no one to fight. Instead, they gave us food and talked to us,” the soldier was quoted as saying.

He added that the troops vowed “not to follow orders to shoot at these people.” Some soldiers chose to take the side of the locals, some decided to stay “neutral.” They are now “waiting what comes next.”

Similar developments were also seen in another Donetsk region city, Kramatorsk, where Ukrainian troops began entering Tuesday after taking a nearby airfield by force, captured a day earlier by armed self-defense activists.

As Ukrainian armored vehicles rolled into the city’s center Wednesday, they were surrounded by locals and surrendered. Some of the APCs were filmed flying Russian flags in support of the locals. Kiev eventually confirmed that six APCs were taken away in Kramatorsk but claimed that they were “captured by the extremists.” Earlier, coup-imposed Kiev officials dismissed the news as “fake” and even claimed that by raising Russian flags the troops “infiltrated” the areas “controlled by Russian Army units and separatists.”

In the village of Pchyolkino, south of Kramatorsk, locals blocked part of a large convoy of armored vehicles. The people are demanding that the troops turn back their vehicles and leave for Dnepropetrovsk, where they are stationed.

Residents negotiated with the blocked troops peacefully and also brought drinks and food to the “exhausted” soldiers, vp.donetsk.ua reported from the scene.

“They’ve had us running around for about two months now. We’re being sent to one city, then to the next. We cannot even wash, or eat normally or rest,” one of the troops was quoted as saying.

RT’s Ruptly agency also spoke with Ukrainian soldiers in Kramatorsk. According to Ruptly’s Monika Kalinowska, the soldiers blamed the media for giving “fake information” and “creating unnecessary tension.” One of the soldiers told Kalinowska that he found “no aggression” coming from the eastern Ukrainians, except for cases of few “drunks” approaching them with questions.

However, not all the Ukrainian troops were ready to surrender and side with the locals blocking their way. A video by Ustream user Russian_Donetsk_2 shows a Ukrainian soldier threatening civilians who attempted to step in the way of a convoy of APCs near Kramatorsk by holding a grenade. The people surrounding the vehicles can be heard jeering the soldier. Meanwhile, the Ukrainian media has been quoting some of the troops sent to eastern Ukraine as saying they will “never surrender” to pro-Russian activists.

In a separate incident near Kramatorsk, a car attempting to block the military convoy’s way was rammed and severely damaged by an APC. The driver managed to escape the vehicle unharmed.

Several accounts of shooting were described in reports coming from the area later on Wednesday. Three people were injured after Ukrainian troops heading for Kramatorsk airfield in armored vehicles fired at a car attempting to block their way near Pchyolkino, RIA Novosti reported citing anti-government activists.

Local residents trying to block troops on APCs in the same region were filmed showing bullets that they say were fired by the Ukrainian military as warning shots but in the direction of the people. At least one person was injured by such warning shots, according to reports.

While clearly not in favor of tanks driving through the streets of their cities, the eastern Ukrainians have particularly been disgruntled by the term “anti-terrorist operation” used by the Kiev authorities to describe the crackdown on dissent in the region.

Slavyansk activist Natalya Vetlich told RT that the locals are puzzled by the military operation launched by Kiev, because there are no “terrorists” there.

“Today, Ukrainian troops sided with the people – the troops that were sent to our city to suppress ‘terrorism.’ We do not see any terrorism in our city. This means, they have been sent to fight with peaceful civilians, with women and children… to fire at those women and elderly people who have gathered on the city’s square,” Vetlich said.

According to the activist, the locals cheered and saw off the troops hoisting Russian flags as heroes – but first they had to give them some food.

“Before we had chance to talk with the boys, we had to feed them. It is because they threw those boys at us like kittens, to fire at us, but forgot to even provide them with food,” the activist said, adding that in Kramatorsk the situation was practically the same.

Vetlich said that a recent statement from Kiev that particularly insulted the locals and was laughed at was made by senior Batkivshchyna party official Sergey Sobolev. Citing coup-imposed acting Defense Minister Mikhail Koval, Sobolev claimed that Ukrainian troops raising Russian flags in fact made a “breakthrough” by “infiltrating separatists” and called the ongoing operation a “guerilla warfare.”

“Who are you at war with? With which terrorists? This whole ‘anti-terrorist’ operation does not make any sense to us,” Vetlich said.

According to Vetlich, Slavyansk residents are still concerned with the recent developments, because a group of “about 14 men dressed in black military clothing” fired at and passed a checkpoint set up by the local militia. The group then apparently “changed clothes,” mixing with civilians. Slavyansk activists are now expecting “provocations” from unidentified gunmen, Vetlich said.

Artillery shelling & airstrikes in Eastern Ukraine have killed hundreds civilians including a few dozen children & forced at least 110.000 civilians to flee the area across the Russian border.
Russia is taking “very good care” of refugees from Ukraine by helping them to cross the border and providing proper accommodation, the representative of the UN High Commissioner for Refugees, Baisa Vak-Voya, told RT, after visiting a refugee camp in the Rostov region on the Russian side of the border.

On Monday, July 6, U.S. President Barack Obama, in a conversation with his French counterpart Francois Hollande, supported the punitive operation in eastern Ukraine.


UN: 110,000 people fled Ukraine to Russia this year
The number of Ukrainian refugees in Russia has reached 110,000 people, while the 54,400 others have been internally displaced, the UN’s refugee department stated.

Email ThisBlogThis!Share to TwitterShare to FacebookShare to Pinterest
Labels: Ukraine