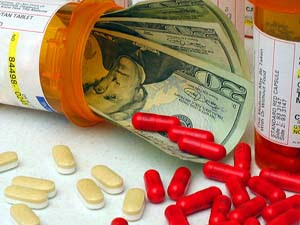 Those of us who have long been describing the pharmaceutical industry as a "criminal racket" over the last few years have been wholly vindicated by recent news.

Drug and vaccine manufacturer Merck was caught red-handed by two of its own scientists faking vaccine efficacy data by spiking blood samples with animal antibodies. GlaxoSmithKline has just been fined a whopping $3 billion for bribing doctors, lying to the FDA, hiding clinical trial data and fraudulent marketing. Pfizer, meanwhile has been sued by the nation's pharmacy retailers for what is alleged as an "overarching anticompetitive scheme" to keep generic cholesterol drugs off the market and thereby boost its own profits.

The picture that's emerging is one of a criminal drug industry that has turned to mafia tactics in the absence of any real science that would prove their products to be safe or effective. The emergence of this extraordinary evidence of bribery, scientific fraud, lying to regulators and monopolistic practices that harm consumers is also making all those doctors and "skeptics" who defended Big Pharma and vaccines eat their words.

To defend Big Pharma today is to defend a cabal of criminal corporations that have proven they will do anything -- absolutely anything -- to keep their profits rolling in. It makes no difference who they have to bribe, what studies they have to falsify, or who has to be threatened into silence. They will stop at nothing to expand their profit base, even if it means harming (or killing) countless innocents.

GlaxoSmithKline pleads guilty to bribery, fraud and other crimes

It what is now the largest criminal fraud settlement ever to come out of the pharmaceutical industry, GlaxoSmithKline has pleaded guilty and agreed to pay $1 billion in criminal fines and $2 billion in civil fines following a nine-year federal investigation into its activities.

According to U.S. federal investigators, GlaxoSmithKline:
• Routinely bribed doctors with luxury vacations and paid speaking gigs
• Fabricated drug safety data and lied to the FDA
• Defrauded Medicare and Medicaid out of billions
• Deceived regulators about the effectiveness of its drugs
• Relied on its deceptive practices to earn billions of dollars selling potentially dangerous drugs to unsuspecting consumers and medical patients

And this is just the part they got caught doing. GSK doesn't even deny any of this. The company simply paid the $3 billion fine, apologized to its customers, and continued conducting business as usual.

By the way, in addition to bribing physicians, GSK has plenty of money to spread around bribing celebrities and others who pimps its products. The company reportedly paid $275,000 to the celebrity doctor known as "Dr. Drew," who promoted Glaxo's mind-altering antidepressant drug Wellbutrin.

In June 1999, popular radio personality Dr. Drew Pinsky used the airwaves to extol the virtues of GlaxoSmithKline PLC's antidepressant Wellbutrin, telling listeners he prescribes it and other medications to depressed patients because it "may enhance or at least not suppress sexual arousal" as much as other antidepressants do. But one thing listeners didn't know was that, two months before the program aired, Dr. Pinsky -- who gained fame as "Dr. Drew" during years co-hosting a popular radio sex-advice show "Loveline" -- received the second of two payments from Glaxo totaling $275,000 for "services for Wellbutrin."

According to former Merck virologists Stephen Krahling and Joan Wlochowski, the company:

• "Falsified test data to fabricate a vaccine efficacy rate of 95 percent or higher."
• Spiked the blood test with animal antibodies in order to artificially inflate the appearance of immune system antibodies.
• Pressured the two virologists to "participate in the fraud and subsequent cover-up."
• Used the falsified trial results to swindle the U.S. government out of "hundreds of millions of dollars for a vaccine that does not provide adequate immunization."
• Intimidated the scientists, threatening them with going to jail unless they stayed silent.


Millions of children put at risk by Merck

In that document the two virologists say they, "witnessed firsthand the improper testing and data falsification in which Merck engaged to artificially inflate the vaccine's efficacy findings."

They also claim that because of the faked vaccine results, "the United States has over the last decade paid Merck hundreds of millions of dollars for a vaccine that does not provide adequate immunization... The United States is by far the largest financial victim of Merck's fraud."

They go on to point out that children are the real victims, however:
"But the ultimate victims here are the millions of children who every year are being injected with a mumps vaccine that is not providing them with an adequate level of protection. ...The failure in Merck's vaccine has allowed this disease to linger with significant outbreaks continuing to occur."

According to the complaint, Merck has been using the same mumps strain -- weakened from generations of being "passaged" -- for the last 45 years! The complaint reads:

"For more than thirty years, Merck has had an exclusive license from the FDA to manufacture and sell a mumps vaccine in the U.S. The FDA first approved the vaccine in 1967. It was developed by Dr. Maurice Hilleman, at Merck's West Point research facility, from the mumps virus that infected his five year-old daughter Jeryl Lynn. Merck continues to use this 'Jeryl Lynn' strain of the virus for its vaccine today."

This information appears to show Merck's mumps vaccine to be a complete medical farce. Those who blindly backed Merck's vaccines -- the science bloggers, "skeptics," doctors, CDC and even the FDA -- have been shown to be utter fools who have now destroyed their reputations by siding with an industry now known to be dominated by scientific fraud and unbounded criminality.

That's the really hilarious part in all this: After decades of doctors, scientists and government authorities blindly and brainlessly repeating the mantra of "95% effectiveness," it all turns out to be total quackery hogwash. Utterly fabricated. Quackety-quack quack. And all those hundreds of millions of Americans who lined up to be injected with MMR vaccines were all repeatedly and utterly conned into potentially harming themselves while receiving no medical benefit.

Intelligent, informed NaturalNews readers, home school parents, and "awakened" people who said "No!" to vaccines are now emerging as the victors in all this. By refusing to be injected with Merck's vaccines, they avoided being assaulted with a fraudulent cocktail of adjuvant chemicals and all-but-useless mumps strains over four decades old. They protected their time, money and health. Those who refuse to be physically violated by vaccines are, once again, turning out to be the smartest people in society. No wonder they also tend to be healthier than the clueless fools who line up to get vaccinated every year.

Merck fraudulently misrepresented the efficacy of its vaccine and contributed to the spread of infectious disease, says lawsuit

The faked vaccine efficacy numbers aren't the only troubles Merck is now facing. Shortly after the above False Claims Act was made public, Chatom Primary Care filed suit against Merck. That document is available from NaturalNews.

Another interesting note in all this is that under President Obama, the U.S. Dept. of Justice showed no interest whatsoever in investigating Merck over the False Claims Act filed by two of its former virologists. Despite the convincing evidence of fraud described in detail by insider whistleblowers, the Obama Department of Justice, led by gun-running Attorney General Eric Holder who is already facing serious questions over Operation Fast and Furious, simply chose to ignore the False Claims Act complaint.

When evidence of criminal fraud was brought before the U.S. Department of Justice, in other words, the DoJ looked the other way with a wink and a nod to the medical crimes taking place right under their noses. Who cares if tens of millions of children are being injected year after year with a fraudulent mumps vaccine? There's money to be made, after all, and exploiting the bodies of little children for profit is just business as usual in a fascist nation dominated by corporate interests.

Adding to all this, Pfizer has now been sued by five U.S. retailers (pharmacies) who accuse the company of monopolistic market practices. According to the lawsuit, Pfizer conspired to prevent generic versions of its blockbuster cholesterol drug Lipitor from entering the market. This was done to protect billions in profits while making sure patients did not have access to more affordable cholesterol drugs. Pfizer sells nearly $10 billion worth of Lipitor each year.

According to the Reuters report on this lawsuit, Pfizer is being accused of

No arrests or prosecution of Big Pharma executives

One of the most astonishing realizations in all this is that given all the criminal fraud, bribery, misrepresentation, lying to the FDA, price fixing and other crimes that are going on in the pharmaceutical industry, you'd think somebody somewhere might be arrested and charged with a crime, right?
Nope.

To date, not a single pharmaceutical CEO, marketing employee or drug rep has been charged with anything related to all this fraud. In America, drug company employees are "above the law" just like top mafia bosses of a bygone era.

How insane is this, exactly? Consider this:
Imagine if YOU, an individual, went around town bribing doctors, falsifying data, selling a fraudulent product to the government, lying to regulators, engaging in anti-trade price-fixing and threatening your employees into silence. What would happen to you?

You'd probably wind up rotting in prison, the subject of an FBI investigation and a DoJ prosecution.

So why is it okay for a multi-billion-dollar corporation to carry out these same crimes and get away with it? Why are the CEOs of top drug companies given a free pass to commit felony crimes and endless fraud?

I'll tell you why, and you're not gonna like the answer: Because America has become a nation run by crooks for the benefit of crooks. It's one big country club, and as comedian George Carlin used to say, "YOU ain't in it!"

• Falsify efficacy data on other prescription drugs?
• Exploit children for deadly vaccine trials?
• Invent fictitious diseases to sell more drugs?
• Unleash bioweapons to cause a profitable pandemic?
• Conspire with the CDC to spread fear to promote vaccinations?
• Silence whistleblowers who try to go public with the truth?
• Give people cancer via stealth viruses in vaccines?
• Destroy the careers of medical scientists who question Big Pharma?
• Force a medical monopoly on the entire U.S. population via socialist health care legislation?

But of course they would. In fact, the industry is doing all those things right now. And if you don't believe me, just remember that five years ago, no one believed me when I said drug companies were engaged in criminal conspiracies to defraud the nation -- something that has now been proven over a nine-year investigation.