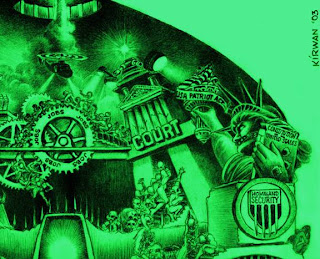 Did you ever think the title would apply to YOU ?
Well it does now.


This most extreme circumstance is not something that Americans thought would ever become the case—and yet it has. Even though it’s true now, hundreds of millions of people still refuse to understand the implications, of what this really means to them.

Literally you no longer own the rights to water, to your land or your property, to any of your own creations or your thoughts. The entire Bill of Rights has been obliterated (unofficially) but in practice it has become the operative fact because the courts refuse to hear actual questions about the Constitution the Declaration of Independence or any of the freedoms that once were commonplace.  You and I are prisoners in this place and DHS is only the token symbol of what this means to every man woman and child here. The drug gangs run the prisons and work hand in glove with the totally corrupted department of just-us—yet no one notices.

We no longer have the right to grow our own food. We cannot require that we be told what’s in the food that’s sold to everyone every day. The same is true of the medical drugs the vaccines or any of the over-the-counter medicines that are supposed clearly labeled. In brief nothing is any longer “regulated” in favor of protecting American consumers or citizens. Your retirement is no longer your own. Neither are you entitled to receive what you have earned from Social Security or for any other government assistance program that supposedly could help when things get really rough.

The water has been poisoned. The air is contaminated. The soil is becoming toxic. The food is ineatable. The weather world-wide is being fcked with massively. Still thousands of planes fly around the clock all over the planet to kill the earth and alter weather patters everywhere.

Whatever anyone could do back in the twentieth century is no longer permitted today. Everything now requires permission-from-the-government. Traffic laws have become cash-registers cranking our astronomical-fines just to support the just-us-system with no obligation that whatever your problems are, will ever be heard or fixed. Cops kill people at random and never face trial for whatever they decide to do. The right to privacy, to be secure in your papers, deeds or anything else is a very cruel joke.

You must at any time be able to prove anything and everything that you might be involved with, is actually legal. All the need for proof is upon you. Meanwhile the cops need to prove nothing before they arrest, torture you, or just open fire to end your life. These crimes against us are not prosecuted when the perpetrator is a cop. Judges are behaving like they work for Hitler or Stalin. The courts are gateways to the literal hell that our prisons have become, while Amerikkkans were sound asleep.
Professions have been co-opted and infiltrated by the government.

Our children are encouraged to ignore their parents and listen only to the state as the only one-true authority in their lives. The “law” is worse than a joke. The U.S. Attorney General is still pushing guns to the Mexican Mafia and the Drug Dealers, illegally. The so-called president is not an American, but a communist determined to destroy what’s left of the nation. Our Dictator-for-Life has taken over the legislative functions of the Congress and the courts with dozens and dozens of Executive Orders that literally flood the in-boxes on the net every day and night. Meanwhile the media refuses to report on key events, or actual news anywhere. Whatever happens to the United States, or her people, is reported on by RT or Iran, and sometimes on the web while everyone else remains silent. We are left to hurtle toward oblivion at a pace that’s approaching the speed of sound.

Everyone in government or in the militarized-police lies about everything they do everyday to anyone they meet. The government reports to Israel and never to the American people while the nation plunges into launching wars by the dozens all over the world.

Does none of this bother you—even just a little? If so, why have you kept quiet for the last thirteen years while these massive changes were created right in front of you? Well, at least the women in America are investing in and using guns, to protect themselves – and their numbers have doubled since 2005—so some people are getting it! (1)

This unofficial page of grievances could run to over thirty pages, but I won’t waste any more of your time. Soon enough you will learn the truth the hard way anyhow.

Just never say you were not WARNED.

That image at the top came from a fact that was already undeniably true back in 2003. Everything from then till now has only added to our problems. The larger images came from two halves of one of the other five images that described this nightmare clearly. That was called “Through the Hourglass – Darkly.” (2)

The people that call themselves Americans apparently believe

“THAT THIS CAN’T HAPPEN HERE – NOT IN AMERICA!”
But it has already happened, everything except
The FREE-FIRE ZONES are already facts.

When you wake-up and realize how much you’ve already lost, you might postpone those dreadful tears and concentrate on this:

YOU’VE got ‘NOTHIN LEFT TO LOSE’!