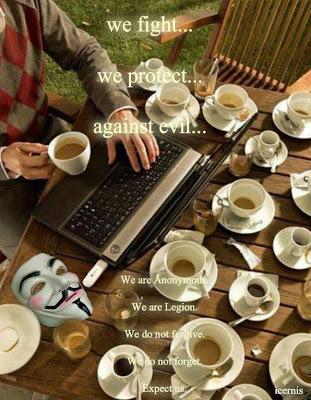 Dear citizens of the world, Operation: Awake the Masses has begun.
(video below)

First, let's make one thing clear. For the ones still not believing our words as being the truth, we are not a conspiracy created in China or Russia, determined to overthrow the United States of America. As far as we can see, almost all of the governments of the world are poisoned by greed and enslaved by the monopoly cartel. We have been created by the very acts of violence, terror, and greed, which has been used by your Government and its shadow masters ruling it, to conquer the entire World.

Anonymous is everyone; everyone can take action in his own way against their own governments if they believe that the people working there, does not serve the citizens' best interest, but instead they serve the corporate monopoly.

Action must be taken nonetheless.

We are not blind and we see the problems facing Asia and the Middle-East. But first we will concentrate our efforts in the direction of the United States of America. Here is where the most unequal distribution of wealth exists. 400 people now own more wealth than most of its population. To be precise, more than 150 million people. 400 versus 150 million people. This will only stop if we start to awake the people that see life very different than the rest of us. The people we are talking about spend most of their time watching foolish TV shows about celebrities and still believe that their leaders only want the best for them. Also, watching whatever sick programs created for the human mind to be enslaved and redirected from the real problems facing humanity.

We have seen many brothers and sisters showing their interest in wanting to help humanity pass on the right track. Well, now is your chance. Here is what you can do to help to break the chains which have enslaved our planet. Upload on any social network or video-sharing sites like Facebook and Youtube, all the videos that you believe that represents the truth of the danger that threats our very existence. But, rename their title in a way so that people that are still asleep to be interested in. You have to make it look interesting in title, but the content to be straight to the matter. Of course, most of them will ignore the videos, report them, have them deleted, so be careful to use accounts that you can dispose of, so that your own accounts can be safe. This will also trigger a much securer protocol of those social networks and video-sharing sites, but by the time they will implement them, we will have already gained another couple of millions of awakened people on our side.

Just think what chain reaction we could create.

We remind the rest of Anonymous collectives to never underestimate the power of brainwashed people in large numbers. We are still a minority compared to the rest of the Earth population. And the only way we would ever have a chance into saving humanity once and for all from the monopoly banking system is by telling people the truth, even if they don't want to hear it.

So this is our primary mission from now on.

Replacing their brainwashing weapons with the truth is the most peaceful action we will ever be able to take. And the most important fact is that it can be done by anyone, because anyone can be Anonymous. Let's remind them that we're not helpless no matter what threats or acts of violence they take.

We are not here to play foolish games - we are here with a mission. We are not getting paid for it, we are not becoming famous for it. Anonymous is everyone. Remember that. And never forget that we stand for true justice, equality, and liberty.

Anonymous - In a attempt to open the eyes of the people of the world.

Error 404! The freedom you are looking for could not be found. Restart your government and try again later.