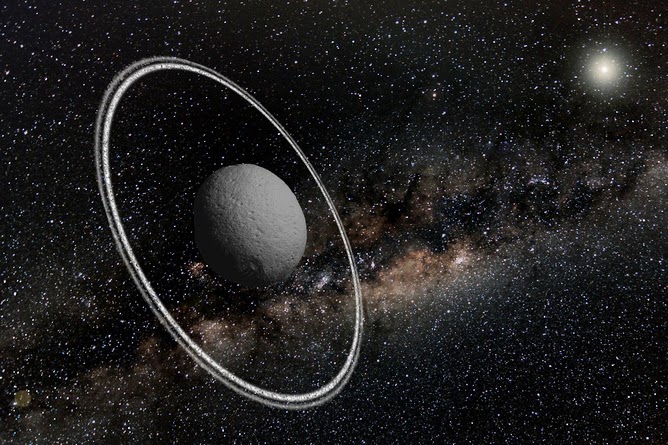 Observations at many sites in South America, including ESO’s La Silla Observatory, have made the surprise discovery that the remote asteroid Chariklo is surrounded by two dense and narrow rings. This is the smallest object by far found to have rings and only the fifth body in the Solar System — after the much larger planets Jupiter, Saturn, Uranus and Neptune — to have this feature.

The origin of these rings remains a mystery, but they may be the result of a collision that created a disc of debris. The new results are published online in the journal Nature on 26 March 2014.

The rings of Saturn are one of the most spectacular sights in the sky, and less prominent rings have also been found around the other giant planets. Despite many careful searches, no rings had been found around smaller objects orbiting the Sun in the Solar System. Now observations of the distant minor planet [1] (10199) Chariklo [2] as it passed in front of a star have shown that this object too is surrounded by two fine rings.

"We weren’t looking for a ring and didn’t think small bodies like Chariklo had them at all, so the discovery — and the amazing amount of detail we saw in the system — came as a complete surprise!" says Felipe Braga-Ribas (Observatório Nacional/MCTI, Rio de Janeiro, Brazil) who planned the observation campaign and is lead author on the new paper.

Chariklo is the largest member of a class known as the Centaurs [3] and it orbits between Saturn and Uranus in the outer Solar System. Predictions had shown that it would pass in front of the star UCAC4 248-108672 on 3 June 2013, as seen from South America [4]. Astronomers using telescopes at seven different locations, including the 1.54-metre Danish and TRAPPIST telescopes at ESO’s La Silla Observatory in Chile [5], were able to watch the star apparently vanish for a few seconds as its light was blocked by Chariklo — an occultation [6].

But they found much more than they were expecting. A few seconds before, and again a few seconds after the main occultation there were two further very short dips in the star’s apparent brightness [7]. Something around Chariklo was blocking the light! By comparing what was seen from different sites the team could reconstruct not only the shape and size of the object itself but also the shape, width, orientation and other properties of the newly discovered rings.

The team found that the ring system consists of two sharply confined rings only seven and three kilometres wide, separated by a clear gap of nine kilometres — around a small 250-kilometre diameter object orbiting beyond Saturn.

"For me, it was quite amazing to realise that we were able not only to detect a ring system, but also pinpoint that it consists of two clearly distinct rings," adds Uffe Gråe Jørgensen (Niels Bohr Institute, University of Copenhagen, Denmark), one of the team. "I try to imagine how it would be to stand on the surface of this icy object — small enough that a fast sports car could reach escape velocity and drive off into space — and stare up at a 20-kilometre wide ring system 1000 times closer than the Moon." [8]

Although many questions remain unanswered, astronomers think that this sort of ring is likely to be formed from debris left over after a collision. It must be confined into the two narrow rings by the presence of small putative satellites.

"So, as well as the rings, it’s likely that Chariklo has at least one small moon still waiting to be discovered," adds Felipe Braga Ribas.

The rings may prove to be a phenomenon that might in turn later lead to the formation of a small moon. Such a sequence of events, on a much larger scale, may explain the birth of our own Moon in the early days of the Solar System, as well as the origin of many other satellites around planets and asteroids.

The leaders of this project are provisionally calling the rings by the nicknames Oiapoque and Chuí, two rivers near the northern and southern extremes of Brazil [9].

Notes
[1] All objects that orbit the Sun, which are too small (not massive enough) for their own gravity to pull them into a nearly spherical shape are now defined by the IAU as being small solar system bodies. This class currently includes most of the Solar System asteroids, near-Earth objects (NEOs), Mars and Jupiter Trojan asteroids, most Centaurs, most Trans-Neptunian objects (TNOs), and comets. In informal usage the words asteroid and minor planet are often used to mean the same thing.

[2] The IAU Minor Planet Center is the nerve centre for the detection of small bodies in the Solar System. The names assigned are in two parts, a number — originally the order of discovery but now the order in which orbits are well-determined — and a name.

[3] Centaurs are small bodies with unstable orbits in the outer Solar System that cross the orbits of the giant planets. Because their orbits are frequently perturbed they are expected to only remain in such orbits for millions of years. Centaurs are distinct from the much more numerous main belt asteroids between the orbits of Mars and Jupiter and may have come from the Kuiper Belt region. They got their name because — like the mythical centaurs — they share some characteristics of two different things, in this case comets and asteroids. Chariklo itself seems to be more like an asteroid and has not been found to display cometary activity.

[4] The event was predicted following a systematic search conducted with the MPG/ESO 2.2-metre telescope at ESO’s La Silla Observatory and recently published.

[6] This is the only way to pin down the precise size and shape of such a remote body — Chariklo is only about 250 kilometres in diameter and is more than a billion kilometres from Earth. Even in the best telescopic views such a small and distant object just appears as a faint point of light.

[7] The rings of Uranus, and the ring arcs around Neptune, were found in a similar way during occultations in 1977 and 1984, respectively. ESO telescopes were also involved with the Neptune ring discovery.

[8] Strictly speaking the car would have to be rather fast — something like a Bugatti Veyron 16.4 or McLaren F1 — as the escape velocity is around 350 km/hour!

[9] These names are only for informal use, the official names will be allocated later by the IAU, following pre-established rules.