“Should the public discover the true health cost(s) of nuclear pollution, a cry would rise from all parts of the world and people would refuse to cooperate passively with their own death.”

In her article titled “Radioactivity: No Immediate Danger,” she coined a new word. “Omnicide” describes the ultimate human rejection of life. It’s “difficult to comprehend,” but it’s happening, she said.

She called industrial radioactive pollution “cumulatively greater than Chernobyl. We are now in a no-win situation with radioactive materials, where (it’s) acceptable to have cancer deaths, deformed children and miscarriages.”

It’s also responsible for hundreds of thousands of curies of deadly radioactive gases and elements in the environment annually.

“Claiming nuclear production of energy is ‘clean,’ ” said Bertell, “is like dieting but stuffing yourself with food between meals.”

“There is no such thing as a radiation exposure that will not do damage. There is a hundred per cent possibility that there will be damage to cells. The next question is: which damage do you care about?”

All toxic hazards are serious, she explained. Nuclear radiation is worst of all. It threatens all human life. “Our present path is headed toward species death – whether fast with nuclear war or technological disaster, or slow, by poison.”

According to Professor Hiroaki Koide, Tokyo’s as contaminated as Fukushima. Thousands of city residents protested. They oppose nuclear power. They want safe energy sources replacing it.

Hazardous air, water and land readings across many areas globally are many multiples too high. Future epidemic cancer levels are certain. It occurs when body cells divide and spread uncontrollably. If untreated, it metastasizes and kills.

Tens of thousands of children have confirmed thyroid abnormalities. They reflect the tip of the iceberg. Children are especially vulnerable. No radiation dose is safe.

Karl Grossman wants planet earth made a “nuclear free zone.” We barely made it through the last century without a “major nuclear weapons exchange,” he said.

Nuclear energy in all forms is unsafe. Safe, clean, renewable solar, wind, geothermal, and other energy sources are readily available.

Admiral Hyman Rickover (1900 – 1986) was the father of America’s nuclear navy. In January 1982, he told a congressional committee that until a few billion years ago, “it was impossible to have any life on earth.”

“There was so much radiation on earth you couldn’t have any life, fish or anything.” Gradually the amount subsided. “Now, we are creating something which nature tried to destroy to make life possible.”

“Every time you produce radiation, (a) horrible force” is unleashed. “In some cases (it’s) for billions of years, and I think the human race is going to wreck itself.”

“I am talking about humanity. The most important thing we could do is start having an international meeting where we first outlaw nuclear weapons to start off with. Then we outlaw nuclear reactors, too.”

“The lesson for history is when a war starts, every nation will ultimately use whatever weapons are available. That is the lesson learned time and again.” ”

“Therefore, we must expect, if another war, a serious war breaks out, we will use nuclear energy in some form. We will probably destroy ourselves.” Widespread contamination acts in slow motion. 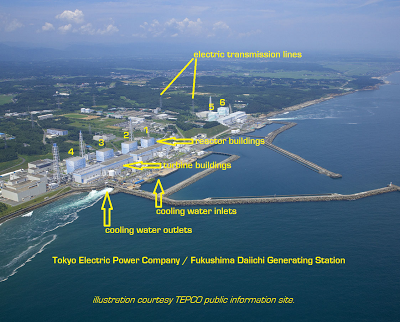 Water around the affected tank is highly radioactive. It’s about 800 meters from the Pacific. Government and Tokyo Electric (Tepco) claimed it won’t likely reach it. Numerous previous reports suggest otherwise.

Tepco general manager Masayuki Ono said “(w)e cannot deny the fact that our faith in the underwater tanks is being lost.”

New data show high contamination levels. “The Fukushima disaster caused by far the largest discharge of radioactivity into the ocean ever seen.”

Radiation levels aren’t dropping. “The implications are serious for the fishing industry.”

“….an estimated 160,000 (Japanese) citizens still have not returned home. Reports of illness in humans and livestock continue to underscore the far reaching and difficult to predict impacts that a nuclear accident can cause.”

Mutations were found in butterflies and other insects. Their shorter life cycles allow genetic disruptions to show up sooner than in humans or other mammals.

“Leaks were found in three of seven pits in the past week….” Options for moving contaminated water are limited.

“Yesterday, Tepco reported another leak of radiated water, this time from a pipe.”

“….(S)cientists are still trying to quantify the extent of the damage.” Most important is “determining just how much hazardous material escaped into the atmosphere….”

“(N)ew reports indicate that a wealth of new radioactive materials have been spewed into the atmosphere.”

It’s spreading globally. Nuclear radiation is forever. It doesn’t dissipate or disappear. No safe level exists. Every dose is an overdose. Bertell was right. “Omnicide” threatens everyone.

lives in Chicago. He can be reached at lendmanstephen@sbcglobal.net.

Visit his blog site at sjlendman.blogspot.com.

It airs Fridays at 10AM US Central time and Saturdays and Sundays at noon. All programs are archived for easy listening.