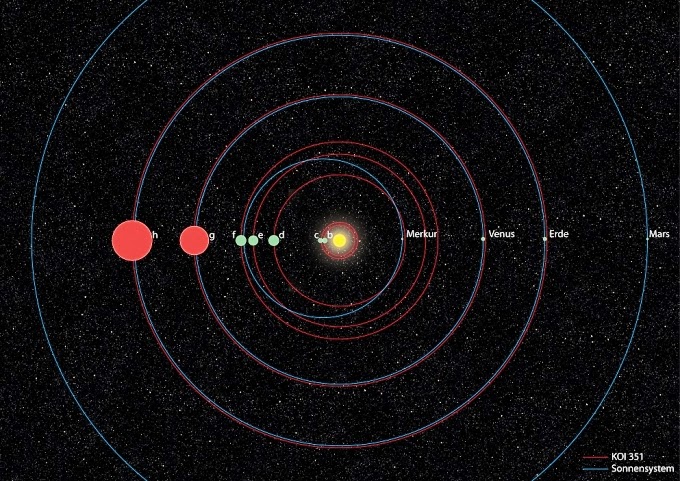 A team of astrophysicists at the German Aerospace Center, together with European colleagues, has discovered the most extensive planetary system to date, with striking similarity to our own Solar system! Seven planets circle the star KOI-351 – more than in other known planetary systems.


They are arranged in a similar fashion to the eight planets in the Solar System, with small rocky planets close to the parent star and gas giant planets at greater distances. Although the planetary system around KOI-351 is packed together more tightly, it provides an interesting comparison to our cosmic home.


Important step in the search for a 'twin Solar System'

Astrophysicists around the world have been searching for a star system similar to our own for a long time. Now, the team led by Juan Cabrera, an astrophysicist at the DLR (Deutsches Zentrum für Luft und- Raumfahrt) Institute of Planetary Research in Berlin-Adlershof has taken a major step in this direction. Three of the seven planets in orbit around the star KOI-351 were discovered in recent years, and have periods of 331, 211 and 60 days, similar to those of Earth, Venus and Mercury.

The planets discovered by Cabrera and his team are even closer to the star and have orbital periods of 7, 9, 92 and 125 days. The outermost planet orbits the star at a distance of about 150 million kilometres, or roughly one Astronomical Unit (AU), so the entire planetary system is compressed into a space corresponding to the distance between Earth and the Sun.
In the article, published in the Astrophysical Journal in October, Juan Cabrera and his colleagues emphasise the similarities between KOI-351 and the Solar System: "No other planetary system shows such a similar 'architecture' to that of our cosmic home as does the planetary system around KOI-351," says Cabrera.

"We cannot stress just how important this discovery is. It is a big step in the search for a 'twin' to the Solar System, and thus also in finding a second Earth," said Cabrera. Heike Rauer, head of the Extrasolar Planets and Atmospheres working group at the DLR Institute of Planetary Research and professor at the Centre for Astronomy and Astrophysics at the University of Berlin, adds: "The discovery of this complex planetary system helps us to better understand the processes that give rise to such planetary systems."

The development of a special computer algorithm enabled Juan Cabrera and his team to detect the four new planets around KOI-351. The DLR astrophysicist was able to filter out the light curves that reveal the 'transit' of a planet across its parent star from the Kepler measurements.

A transit is inferred from the small, periodic dimming of the star's light as the planet crosses the star's disc. This technological development is likely to be crucial in the search for similar multiple systems using large data sets from future space telescopes. The discovery was confirmed shortly afterwards by a US group led by Joseph R. Schmitt of Yale University, by visual inspection of the light curves recorded by Kepler.

KOI is the abbreviation for 'Kepler Object of Interest', which means the star was observed by NASA's Kepler space telescope, between 2008 and 2013, and classified as a candidate for the existence of exoplanets. At present, KOI-351 is the star with the most extrasolar planets, or exoplanets for short. The star is 2500 light years away from Earth.


Unusual resonances between the planets

"The resonances of the planetary orbits are another interesting feature of this system," explains Szilárd Csizmadia, a member of the team led by Cabrera. Orbital resonance occurs when two or more orbiting bodies exert a regular, periodic gravitational influence on one another. "Resonances also play an important role in the Solar System; for example, the moons of Jupiter. So KOI-351 is a gold mine for all researchers investigating planetary formation and the stability of multi-body systems."

The resonances in the planetary system of KOI-351, however, greatly complicated the search for the planets. Due to the strong interaction between the planets, the signals sought by Juan Cabrera in the Kepler data were not strictly periodic, but showed strong variations in the orbital periods. Rudolf Dvorak of the University of Vienna highlights the planet KOI-351g as being particularly interesting: "The orbital period of planet g varies by about a day between consecutive transits during the observations. Disturbances of this kind have been noted previously, but so far only with maximum deviations of a few minutes."


Groundbreaking discovery for the future of exoplanet research

The discovery also demonstrates the future in the search for extrasolar planets. After the two successful space telescopes CoRoT and Kepler were decommissioned this year, planet hunters are now hopeful with regard to the pending decision on the PLATO mission. PLATO (Planetary Transits and Oscillations of Stars) will build on the experience of CoRoT and Kepler in the search for planetary systems around nearby bright stars, and thus allow for extensive follow-up observations.

This could allow the determination of the radius (as in the system KOI-351)  and the mass of the planets, as well as a first look at the composition of the planet. Furthermore, it would even be possible to examine the atmosphere of the planets in such systems, which may give rise to indications of the activity of living organisms. This would be a major breakthrough in search for a 'second Earth'. The European Space Agency will make a decision on the PLATO mission in early 2014.

Just recently, and about 25 years after their initial discovery, the 1000th exoplanet has been confirmed. Until now, 771 stars with planets have been identified. However, most of the exoplanets discovered so far are 'solitary'. Only 170 stars are known to be orbited by more than one planet. Large planetary systems are the exception – not because they do not exist, but because they are particularly difficult to detect and characterise. At present, only a handful of systems with at least five planets have been confirmed.

Email ThisBlogThis!Share to TwitterShare to FacebookShare to Pinterest
Labels: space