The Biggest Scam In The History Of Mankind 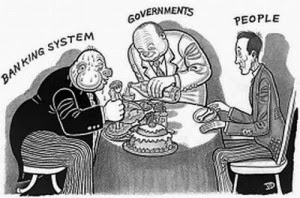 It’s a secret that has huge effects for everyone who lives on this planet. Most people can feel deep down that something isn’t quite right with the world economy, but few know what it is.

Gone are the days where a family can survive on just one paycheck…every day it seems that things are more and more out of control, yet only one in a million understand why. You are about to discover the system that is ultimately responsible for most of  the inequality in our world today.


For this is the biggest Hidden Secret Of Money. Never in human history have so many been plundered by so few, and it’s all accomplished through this…The Biggest Scam In The History Of Mankind. Watch the short presentation on the video below.

Iceland & Vietnam have applied their solution for these criminals.
Bank Executive May Face Death in Vietnam Fraud Trial

A Vietnam court will consider the death penalty for two former executives if they’re convicted in a $25 million fraud scheme, signaling an aggressive stance as leaders seek to clean up the banking system.

The People’s Court of Ho Chi Minh City may hand down the death penalty for Vu Quoc Hao, the former general director of Agribank Financial Leasing Co. (FLKO) No. 2, who is charged with embezzling 531 billion dong ($25 million) of state property, the official Vietnam News reported yesterday.

Dang Van Hai, the former chairman of a construction company, also faces the death penalty in the case, the newspaper said.

Iceland Model On Dealing With Elite Should Be Adopted Worldwide

In Iceland four former bank chiefs have been jailed for fraud - the sentences go as far as five years behind bars.

They're accused of concealing that a Qatari investor bought a stake in their firm, using cash lent from the bank itself - illegally. The deal took place just ahead of the collapse of the bank due to huge debts.
RT talks to economic expert Charlie McGrath, founder of news website Wide Awake News about Iceland's economy.


Related:
Iceland President: Let the Banks Fail
When the banks drive us into poverty, what is the solution?
ECB’s Draghi: Knowing Too Much About Our Big Banks Could Set Off A Panic
How The British Banking Industry Became An Organised Crime Enterprise
What crisis? Billionaires’ fortunes double since 2009
Money Grows on Trees: Scientists Discover Gold Particles in Australian Gum Trees
The protests around the world