Evidence of superwave propagation in a nearby galaxy 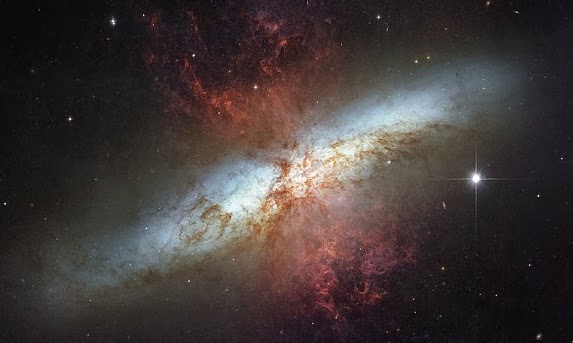 One thing that we should be seriously concerned about is astronomer’s nonchalant attitude in their observation of the encounter of the G2 cloud with our Galaxy’s core.  As noted in the Galactic Pinball posting about the G2 cloud encounter, astronomers are actually hoping to see “fireworks” to learn more about how “black holes dine”.


They don’t realize that, if the galactic core does erupt in fireworks strong enough to produce a superwave, then the moment we see the outburst, the superwave cosmic rays will be here at our doorstep and will start to bite us.  Perhaps they think that just because the Galactic center lies 23,000 light years away, there is nothing to worry about.

Evidence that superwaves do exist in active galaxies can be seen in the case of the nearby “starburst galaxy” M82 in which astronomers have recently observed a radio source moving at the superluminal speed of 4.2c.  This phenomenon is produced by cosmic rays traveling rectilinearly through the galaxy’s central region at very close to the speed of light.  The emissions we see are coming from cosmic rays following a trajectory aimed close to our line of site.  For details about this are discussed in the recent superwave forum posting.

Astronomer Leo Meyer expressed the consensus that the G2 cloud could reach its orbital pericenter (periastron, or point of closest approach to the Galactic core) in just a few months, hence supporting the estimates made by Phifer, et al. and Gillessen, et al. that this point would be reached around March 17th to April 1st, at which point the G2 cloud would be as close as 160 to 200 AU from the Galactic core.  Earlier, Eckart, et al. had stated a date as late as May.

A Galactic superwave is an intense cosmic ray particle barrage, accompanied by electromagnetic radiation and possibly a gravity wave that travels isotropically and rectilinearly outwards from the center of our Galaxy at very close to the speed of light.  A superwave can last for less than a year or for up to several thousand years as occurred during the last ice age. 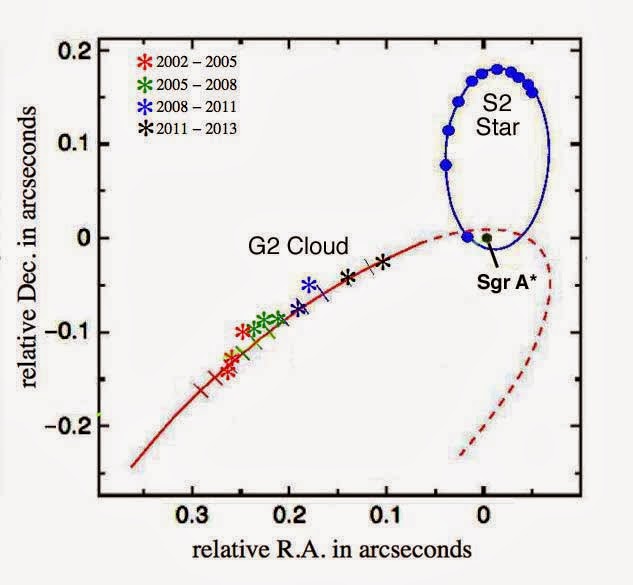 The evidence now looks almost certain that the G2 cloud contains an embedded star (or stars).  Eckart, et al., 2013 have detected a K band infrared image of the cloud and have concluded that their results indicate that the cloud contains a star having a mass somewhere between one solar mass and 30 solar masses (Eckart, 2013a; Eckart, 2013b).  They refer to the G2 cloud as a DSO, or “Dusty S-cluster Object.”

Get Ready for ... A SUPERWAVE: