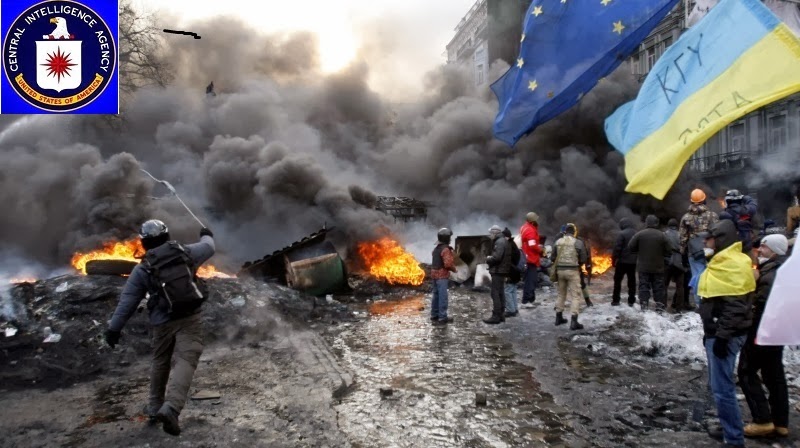 The protests in the western Ukraine are organized by the CIA, the US State Department, and by Washington- and EU-financed Non-Governmental Organizations (NGOs) that work in conjunction with the CIA and State Department. The purpose of the protests is to overturn the decision by the independent government of Ukraine not to join the EU.


The US and EU were initially cooperating in the effort to destroy the independence of Ukraine and make it a subservient entity to the EU government in Brussels. For the EU
government, the goal is to expand the EU. For Washington the purposes are to make
Ukraine available for looting by US banks and corporations and to bring Ukraine into NATO so that Washington can gain more military bases on Russia’s frontier.

There are three countries in the world that are in the way of Washington’s hegemony over the world–Russia, China, and Iran. Each of these countries is targeted by Washington for overthrow or for their sovereignty to be degraded by propaganda and US military bases that leave the countries vulnerable to attack, thus coercing them into accepting Washington’s will.

The problem that has arisen between the US and EU with regard to Ukraine is that Europeans have realized that the takeover of Ukraine is a direct threat to Russia, which can cut Europe off from oil and natural gas, and if there is war completely destroy Europe. Consequently, the EU became willing to stop provoking the Ukraine protests.

The response of the neoconservative, Victoria Nuland, appointed Assistant Secretary of State by the duplicitous Obama, was “fuck the EU,” as she proceeded to describe the members of the Ukraine government that Washington tended to impose on a people so unaware as to believe that they are achieving independence by rushing into Washington’s arms. I once thought that no population could be as unaware as the US population. But I was wrong. Western Ukrainians are more unaware than Americans.

The orchestration of the “crisis” in Ukraine is easy. The neoconservative Assistant Secretary of State Victoria Nuland told the National Press Club in Washington on December 13, 2013, that the US has “invested” $5 billion in agitation in Ukraine. http://www.informationclearinghouse.info/article37599.htm The crisis essentially resides in western Ukraine where romantic ideas about Russian oppression are strong and the population is less Russian than in the eastern Ukraine.

The hatred of Russia in western Ukraine is so dysfunctional that the duped protesters are unaware that joining the EU means the end of Ukraine independence and rule by the EU bureaucrats in Brussels, the European Central Bank, and US corporations. Perhaps Ukraine is two countries. The western half could be given to the EU and US corporations, and the eastern half could be reincorporated as part of Russia, where the entire Ukraine resided for as long as the US has existed.

The disaffection from Russia that exists in western Ukraine makes it easy for the EU and US to cause trouble. Those in Washington and Europe who wish to destroy Ukraine’s independence portray an independent Ukraine as a hostage of Russia, while a Ukraine in the EU is allegedly under the protection of the US and Europe. The large sums of money that Washington funnels into NGOs in Ukraine propagate this idea and work the population into a mindless frenzy. I have never in my life witnessed people as mindless as the Ukrainian protesters who are destroying the independence of their country.

The US- and EU-financed NGOs are fifth columns designed to destroy the independence of the countries in which they operate. Some pretend to be “human rights organizations.” Others indoctrinate people under cover of “education programs” and “building democracy.” Others, especially those run by the CIA, specialize in provocations such as “Pussy Riot.” Few if any of these NGOs are legitimate. But they are arrogant.

The head of one of the NGOs announced prior to the Iranian elections in which Mousavi was Washington’s and the CIA’s candidate that the election would result in a Green Revolution. He knew this in advance, because he had helped to finance it with US taxpayer dollars. I wrote about it at the time. It can be found on my website, www.paulcraigroberts.org and in my just published book, How America Was Lost.

The Ukrainian “protesters” have been violent, but the police have been restrained. Washington has a vested interest in keeping the protests going in the hopes of turning the protests into revolt so that Washington can grab Ukraine. This week the US House of Representatives passed a resolution threatening sanctions should the violent protests be put down by the police.

Paul Craig Roberts
Paul Craig Roberts was Assistant Secretary of the Treasury for Economic Policy and associate editor of the Wall Street Journal. He was columnist for Business Week, Scripps Howard News Service, and Creators Syndicate. He has had many university appointments.