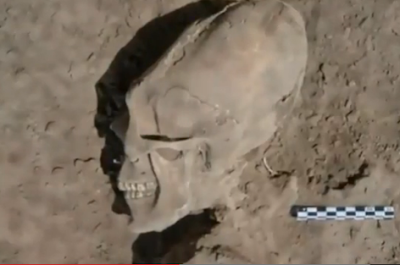 
Archeologists digging at a location in the Northern Mexican state of Sonora encountered a pre-Hispanic burial site of 25 individual skeletons. Thirteen of those 25 have obvious signs of skull deformation, as well as 5 others with dental mutilation. Archeologist believe the burial site may be a result of over practice in cranial deformation or body modification.

According to Past Horizons archaeologist Cristina Garcia Moreno, director of the research project said this:

“This unique find shows a mix of traditions from different groups of northern Mexico. The use of ornaments made from sea shells from the Gulf of California had never been found before in Sonoran territory and this discovery extends the limit of influence of Mesoamerican peoples farther north than has been previously recorded,” said archaeologist Cristina Garcia Moreno, director of the research project.

According to Wikipedia this practice was known as skull flattening or head binding. The practice was most commonly performed on infants, and was done to signify group or social affiliation.

In the video below you will see more images of the deformed alien-like skulls. Please feel free to share your thoughts in the comment box below regarding these deformed human skulls.