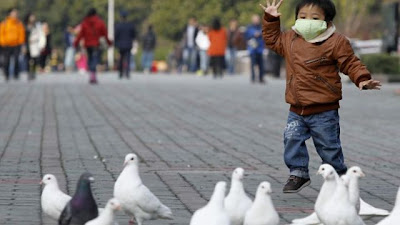 A Chinese Air Force officer on Saturday accused the U.S. government of creating the new strain of bird flu now afflicting parts of China as a biological warfare attack.

People’s Liberation Army Sr. Col. Dai Xu said the United States released the H7N9 bird flu virus into China in an act of biological warfare, according to a posting on his blog on Saturday.

The charge was first reported in the state-run Guangzhou newspaper Southern Metropolis Daily and then picked up by several news outlets in Asia.

State Department spokesman Jason Rebholz dismissed the claim. “There is absolutely no truth to these allegations,” he told the Washington Free Beacon.

Seven deaths from the bird flu outbreak were reported as of Tuesday in state-run Chinese media. As many as 24 people reportedly were infected by the disease in Shanghai, Jiangsu, Zhejiang, and Anhui.

Chinese authorities are trying to calm public fears of a major epidemic, claiming there is no evidence the virus can be transmitted between humans.

The government also is claiming that the outbreak is not related to the recent discovery of thousands of dead pigs floating in a river in China.

The accusation of U.S. biological warfare against China comes as the Pentagon is seeking closer military relations with China. Army Gen. Martin Dempsey, chairman of the Joint Chiefs of Staff, is set to travel to China for talks with Chinese military leaders later this month.

Dai is a military strategist who in the past has been outspoken in seeking to foment conflict between China and the United States. He told the Global Times in August that China should go to war over U.S. support for Japan’s claims to the disputed Senkaku Islands.

Writing on Sina Weibo, a Chinese microblogging site akin to Twitter, Dai stated that the new bird flu strain was designed as a biological weapon similar to severe acute respiratory syndrome (SARS), which he also claimed was developed as a U.S. bio-weapon, that affected the country in 2003.

According to Dai’s posting, the new flu outbreak should not be a cause for concern. “The national leadership should not pay too much attention to it,” the PLA lecturer at the National Defense University wrote. “Or else, it’ll be like in 2003 with SARS!”

“At that time, America was fighting in Iraq and feared that China would take advantage of the opportunity to take other actions,” he said. “This is why they used bio-psychological weapons against China. All of China fell into turmoil and that was exactly what the United States wanted. Now, the United States is using the same old trick. China should have learned its lesson and should calmly deal with the problem.”

Dai said that even if “a few may die” from the flu outbreak, it will not equal one-thousandth of the deaths caused by vehicle accidents in China.

Dai in the past has called for China to punish the United States for U.S. arms sales to rival Taiwan, by selling arms to U.S. enemies. “China recognizes that a few perfunctory protests will not have any effect,” Dai said in 2010. “China can’t directly sanction American arms companies since they did not do business with China … but China can sanction companies that are doing business with China directly, like Boeing or General Electric.”

Dai also has said the United States has used crises with North Korea and offers of cooperation on the issue as a plot to drive a wedge between Beijing and its fraternal communist ally.

Dai also has said U.S. efforts to counter Chinese espionage and intelligence-gathering were part of a U.S. “plot theory” of “western countries threatening others by [releasing] information gained through spying in order to damage the reputations of other countries.”

A State Department official said China notified the World Health Organization (WHO) on March 31 about its first detected human cases of H7N9 infection. Fourteen cases were confirmed by the WHO by April 5, of which six were fatal. The organization said there is no evidence of human-to-human transmission.

“U.S. Embassy Beijing and U.S. Consulate Shanghai are monitoring the situation, working closely with counterparts at the U.S. Centers for Disease Control, and the Beijing and Shanghai municipal governments,” the official said.

The colonel’s accusation provoked a widespread response on Chinese websites. One post in reaction joked that Dai’s comment about auto deaths must mean that the United States and Germany are responsible for a conspiracy to produce cars, according to a report in Hong Kong’s South China Morning Post.

Luo Changping, deputy editor of Caijing, said most PLA soldiers would not support Dai’s comments and he urged the colonel to resign and apologize to those who have died from the current bird flu outbreak.

A defiant Dai then said in a new posting Sunday that “it is common knowledge that a group of people in China have been injected with mental toxin by the United States.”

“Now, a group of fake American devils are attacking me,” he wrote in another post. “I will not retreat even half a step.”

Analysts say the colonel’s remarks are a reflection of the growing xenophobic atmosphere within the Chinese military that views the United States as its main enemy.

Former State Department intelligence analyst John Tkacik said China’s military was largely to blame for mishandling the 2003 outbreak of SARS. Tkacik said there was speculation when the epidemic began that “the PLA suspects SARS had emanated from its own biological laboratories and was all the more eager to keep it secret.” China is known to have a covert biological arms program.

“Col. Dai Xu is a shameless liar when he accuses the United States of using bio weapons,” Tkacik told the Free Beacon. “He’s probably motivated by a desire to exculpate the PLA for their mishandling of the epidemic—no doubt most Chinese have happily forgotten the episode—as much as by a cynical xenophobia. But, that’s what passes for deep strategic thought at China’s National Defense University these days.”

The Pentagon has been trying with varying success to develop closer ties to the Chinese military as part of a strategy aimed at building trust. However, China’s military leaders believe the U.S. offers of closer ties are a ruse designed to contain China’s growing military buildup.

“The leaders both expressed their intention to work together to continue to build a military-to-military relationship that serves the vision of both President Obama and President Xi,” Pentagon press secretary George Little said in a statement after the call.

“The secretary discussed the importance of focusing on areas of sustained dialogue, practical areas of cooperation, and risk reducing measures,” he said.

U.S. ties with China are strained due to China’s reluctance to rein in neighboring North Korea.

China provides North Korea with large amounts of fuel oil and other goods. However, Beijing has not taken steps to pressure Pyongyang using its economic leverage during the ongoing crisis.

The flu has lit up China’s thriving Internet, according to analysts. Over 945,600 microblog postings addressed the flu between April 8 and 9. Since the outbreak began some seven days ago, between 1.3 million and 3 million postings were put online on outlets including Sina Weibo and QQ Weibo.

Tens of thousands of users expressed doubts about the official Shanghai municipal government’s denial of any link between the dead pigs found floating last month in the region’s Huangpu River.

The proximity to the initial outbreak in Shanghai and the river has led to speculation that the pig deaths may have been linked to the flu virus jumping from animals to humans.

That speculation was fueled by reports that one of the victims of the flu was a pig butcher.

The avian flu strain is similar to an earlier outbreak with a significant difference: The current strain does not kill the birds it infects, making it more difficult to identify infected poultry.

The Shanghai government waited 20 days before announcing the first H7N9 infection on March 31.