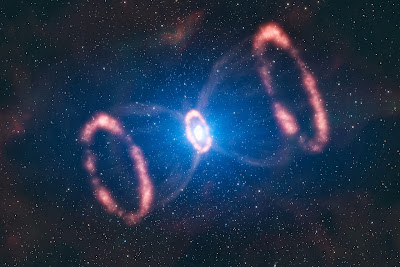 Get ready, stargazers; you may be in for a treat. Astronomers have discovered that it's very possible that sometime during the next 50 years, a supernova occurring in our home galaxy will be visible from Earth.


In fact, they've found that the odds are nearly 100 percent that such a supernova would be visible to telescopes in the form of infrared radiation.

A massive star usually "goes supernova" at the moment when it's used up all its nuclear fuel and its core collapses, just before it explodes violently and throws off most of its mass into space. Yet actually catching this moment is difficult. It occurs relatively quickly, which means that capturing the beginning of a star's demise is near impossible. Yet in this case, it may very well be possible for astronomers to capture this moment.

"We see all these stars go supernova in other galaxies, and we don't fully understand how it happens. We think we know, we say we know, but that's not actually 100 percent true," said Christopher Kochanek, one of the researchers, in a news release. "Today, technologies have advanced to the point that we can learn enormously more about supernovae if we can catch the next one in our galaxy and study with all our available tools."

In order to actually calculate the possibility of this supernova, though, the researchers turned to calculations and computer models. By taking various factors into account, such as infrared light and soot in the galaxy, the astronomers determined that they have nearly a 100 percent chance of catching a prized Milky Way supernova in the next 50 years.

"Every few days, we have the chance to observe supernovae happening outside of our galaxy," said Scott Adams, one of the researchers, in a news release. "But there's only so much you can learn from those, whereas a galactic supernova would show us so much more."

That's not to say that this particular supernova would be visible to the naked eye from Earth, though. The astronomers calculated that there's only a 20 percent chance or less of that occurring. That said, this still represents a valuable opportunity for astronomers to take advantage of this particular phenomenon to learn more about supernovae.

The findings are published in The Astrophysical Journal.


Related:
Living In A Hologram: Our Holographic Reality
Hubble Space Telescope snaps first pictures of super-fast Comet ISON
The Cosmic pattern of Creation that builds our illusions
Earth-like Planets Are Right Next Door