Confronting the Void We Avoid 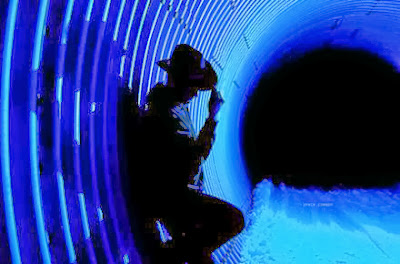 Comedians play a unique and vital role in society. Like the tribal tricksters and court jesters of yore, they serve to expose what is normally hidden, dropping truth in the guise of humor.


The latest example of this subversive talent comes from Louis CK, whose recent rant about smartphones has gone viral. Chatting with Conan O’Brien, Louis describes smartphones as “toxic,” explaining, “You need to build an ability to just be yourself and not be doing something. That’s what the phones are taking away.” With that point made, Louis swan dives into the deep end.

“Underneath everything in your life is that thing, that empty… forever empty… Do you know what I’m talking about?” Although Louis merely gestures with a clenched fist against his gut, Conan immediately answers yes, he does know what Louis is talking about. And judging from the nervous laughter of the audience, so do they, even if they’re not used to talking about it.

Meanwhile, people who are used to talking about it—mainly psychologists and nerdy Buddhists like myself—are filled with a perverse delight.

As it turns out, that indescribable thing has a name. In fact, it has several of them, the most famous being “the existential vacuum,” a term coined by the late Austrian psychologist and concentration camp survivor Viktor Frankl, whose opus, Man’s Search for Meaning, has sold more than 12 million copies in dozens of languages and is frequently cited as life changing.

According to Frankl, the existential vacuum is an inner emptiness commonly felt by the modern “man” living in a world in which “No instinct tells him what he has to do, and no tradition tells him what he ought to do; sometimes he does not even know what he wishes to do.”[1] From this pit of uncertainty arises a unique blend of fear, anxiety, dread, incompleteness, and loneliness that the spiritual teacher Eckhart Tolle considers the primordial emotion from which all other emotions arise. Tolle labels this emotion as simply “pain,” which resonates with the untranslatable word dukkha that the Buddha used to describe the fundamental unsatisfactory-ness of life.

So perhaps the existential vacuum is not an exclusively modern thing. Back in the mid 17th century, the French philosopher Blaise Pascal wrote:

“What else does this craving, and this helplessness, proclaim but that there was once in man a true happiness, of which all that now remains is the empty print and trace?  This he tries in vain to fill with everything around him, seeking in things that are not there the help he cannot find in those that are, though none can help, since this infinite abyss can be filled only with an infinite and unchangeable object; in other words by God himself.”[2]

This passage seems to be the inspiration for the term “God-shaped hole” that has become popular in recent years, especially among those who believe the hole to be shaped like a certain guy from Nazareth. Whatever its dimensions, however, it’s undeniable that we try to fill the vacancy with an endless variety of activities: gossiping, texting, checking email, browsing Facebook, playing video games, watching TV, shopping, working, gambling, waging war, pursuing power and sex, consuming alcohol and drugs… In fact, almost all human activities can be seen as distractions from confronting the dull angst of existence and the lingering fear of death.

This brings us to perhaps the catchiest name for the existential vacuum: “the void we avoid,” a phrase used by the author and physician Gabor Maté. After years of working at a methadone clinic, Maté understands the link between the inner void and addiction:

"Many of us resemble the drug addict in our ineffectual efforts to fill the spiritual black hole… where we have lost touch with our souls, our spirit—with those sources of meaning and value that are not contingent or fleeting. Our consumerist, acquisition-, action-, and image-mad culture only serves to deepen the hole, leaving us emptier than before."[3]

In fact, once could safely if cynically say that the hole is not only deepened but created by modern, techno-industrial culture, which has all but stripped away our most precious spiritual resource: a sense of belonging, of being at home. We have been made to feel forsaken and out of place, not only in our prefabricated houses and soulless apartments, in our claustrophobic work cubicles and stultifying jobs, in the cities where we live alongside so many strangers, but also in the cosmos at large. We have been taught by science that our lives are random accidents, and by religion that we’re fundamentally different from, and superior to, other terrestrial creatures. With this guiding narrative, is it any wonder we’re an addicted society?

Fortunately, recovery is possible, on the personal level at least. There’s a way to overcome the void, a method recommended by sages of all ages, including Louis CK. Towards the end of his Late Night diatribe, his tells the story of being struck by a wave of sadness that made him want to reach for his phone. But he resisted this impulse, allowing himself to fully feel the sadness, which quickly transformed into an equally powerful rush of happiness. Lest we think that “good feelings” are the goal, however, Louis concludes, “Sadness is poetic. You’re lucky to live sad moments.”

Just as the archetypal s/hero must enter the dragon’s lair to retrieve the treasure, so must we delve into the void to find freedom. Indeed we must make the journey repeatedly, day after day and moment after moment. This is the essence of meditation, which basically involves a full and unconditional acceptance of present moment experience, whether pleasant, unpleasant, or existentially dull. Meditation, in turn, is the essence of the spiritual path, which is said to be the only way out of addiction.

Each time we confront instead of avoid, the void becomes less frightening and less empty, until eventually it becomes full-to-bursting with an unshakeable faith, peace, and love. Even if we never reach this state—commonly called enlightenment—we can at least let go of our digital de-vices and learn to abide comfortably in discomfort, so that we might regain that long-denied sense of belonging that is our birthright.