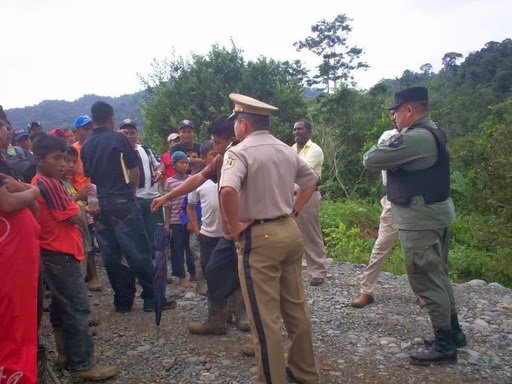 A new report on minorities and indigenous people warns that the global ‘intensification’ in the exploitation of natural resources is leading to mounting conflicts for the world’s 370 million indigenous people.


The report for 2012 by the London-based human rights group, Minority Rights Group International (MRG), says indigenous peoples “in every region of the world” face the risk of being “driven from their land and natural resources.”

The land and resources are all “vital for their livelihoods, their culture and often their identity as a people,” Vital Bambanze, chair of the UN Expert Mechanism on the Rights of Indigenous Peoples, said in the report.


From the Batwa of the Great Lakes region in Central Africa, and the Endorois and Ogiek in Kenya, to hill tribes in northern Thailand, Bedouin in the Middle East and Uighurs in China’s Xinjiang province – all “struggle to maintain their cultural integrity against their respective governments’ desire to put national development first,” Bambanze said.


Unprecedented demand for resources in Asia

The report says the unprecedented demand for natural resources across Asia is “feeding ethnic conflict and displacement and is a severe threat to the lands, livelihoods and the way of life of minorities and indigenous people.”

“In terms of the trends globally what has been happening over the last decade is that there’s been an intensification of the exploitation of natural resources pushing into areas populated by minorities and indigenous peoples,” Soderbergh told DW.

In regions such as Latin America, the issues faced by communities centered on mining and logging, in North America on tar-sands mining, there were conflicts over wind farms and iron ore mining in the Arctic, while in Africa, indigenous communities faced the leasing of thousands of hectares of land for corporations or foreign governments.

“All governments are chasing a dominant development paradigm n which today minorities and indigenous peoples don’t really have a place and that is a problem,” he said.

In China, investment in mining has forced herders off traditional grazing lands and ancestral villages in regions such as Xinjiang Uighur Autonomous Region, as well as in Tibet.

In Vietnam, over 90,000 people, mostly ethnic Thai, were relocated to make way for the Son La hydropower plant with Vietnamese scientists saying many were left without access to agricultural land.
Meanwhile, in Cambodia’s Prey Lang Forest region, home to the Kuy indigenous people, official land grants of tens of thousands of hectares of forest for mineral extraction, timber and rubber plantations have forced many people to give up their traditional livelihoods.

Conflict has also been evident in Indonesia in areas of increased palm oil plantation development and the mining industry in Papua.


Investment from China seen as a driver for economic growth

“It’s definitely increasing, the resource exploitation in indigenous people’s territories; in Southeast Asia, the economies of Laos and Vietnam are opening to more foreign investment, including lots of Chinese investment and including Burma,” Girard said.

Girard says the increased fighting in Myanmar’s ethnic controlled Kachin State over the past year is directly linked to conflict over resource investment largely by Chinese businesses.

Myanmar, led by the military-backed civilian government of President Thein Sein, has been undergoing reforms over the past year to improve its human rights situation. But Naw San, General Secretary of the Students and Youth Congress Burma (Myanmar) says despite steps to peace talks with ethnic groups in Myanmar, the development process is still not inclusive.

“We are still worried that, like in the past, investment and development projects will be dealt with by the central government and that there will be (no real) engagement or consultations with the process on the ground,” Naw San told DW.

“What the ethnic (communities) need now is national equality,” he said.

And those people, according to the AIPP Foundation, “are currently marginalized and subordinated economically, politically and culturally.”

They are “overrepresented among the poor, illiterate, malnourished and stunted,” it said.

AIPP’s report says for many in the region “militarization, (the) plundering of resources, forced relocation, cultural genocide and discrimination in everyday life are common experiences.”

The report pointed to the construction of dams in Asia, which since the 1960s, has led to “massive displacements, loss of livelihoods, and food insecurity of indigenous peoples in India, the Philippines, Laos and Malaysia.”

See called on Asia’s governments to respect the UN’s Declaration of the Rights of Indigenous peoples and the provisions calling for the “free prior of informed consent from any development that comes into their territory.”

“These governments should have the moral obligation to respect these agreements. The declaration should be used as a framework for dealing with indigenous people,” she said.