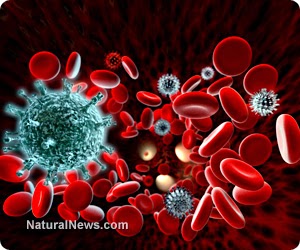 Some interesting discoveries in the area of gene encoding are generating fresh buzz within the scientific community.

A new study recently published in The New England Journal of Medicine has identified a rare type of gene mutation in some humans that appears to confer "super" immunity to viruses, a finding that some scientists hope will lead to breakthroughs in the fight against infectious diseases.


Two children with a rare defect in the gene MOGS, which encodes mannosyl-oligosaccharide glucosidase, were the subjects behind this new discovery. Researchers from the U.S. National Institutes of Health (NIH) and the National Cancer Institute (NCI) found that the two children possessed an unusual natural immunity to influenza, herpes, dengue fever, hepatitis C, HIV and a host of other potentially deadly viruses that is not present in most other people.

The two individuals, both of whom were born with an array of other health problems ranging from cerebral atrophy and dysmorphic facial features to hypoplastic genitalia, were carefully evaluated for frequency of fevers, suspected and confirmed number of infections, and history of antibiotic use. The two were also evaluated for any complications associated with exposure to live viruses and infectious diseases.

After carefully documenting this information, the researchers then assessed the children for MOGS expression, revealing that neither one was within the normal range. The MOGS expression of both children was found to be inhibited, substantiating a paradoxical clinical phenotype in which the children were both suffering from severe immune deficiency and at the same time manifesting robust immunity to many viruses.

"[T]he two siblings we describe have... severe hypogammaglobulinemia and increased resistance to particular viral infections," wrote the researchers in their discussion. "We evaluated the patients' immune systems and susceptibility to viral diseases and found an association with a rare MOGS N-glycosylation defect."

This extraordinary resistance against viral infections comes with a price, though. As previously stated, both of the children evaluated as part of the study had suffered from a severe immune disorder marked by a lack of B-lymphocytes. The result of this was that both of them had very low levels of natural immunoglobulins, or antibodies, in their blood.

This is a tall order, and one that, if the person had a choice, would probably not be worth the atypical resistance to viruses that comes with it. And yet the mechanisms behind how this immune disparity can coexist will likely be the subject of future studies that aim to identify how these positive benefits might be better understood and applied to healthy populations for enhancing immunity.

For example, since the children involved with the study developed negative symptoms early on in the developmental process, deliberately crippling MOGS expression in healthy adults may provide all the immune benefits without the harm. Followup research will need to determine whether or not short-term inhibition of MOGS expression is both safe and effective in adults, particularly in terms of long-term gene expression.

It is "possible that MOGS is needed for chemical regulation inside the neuron, or some other completely untested function," wrote one skeptical Reddit.com commenter about the study. "In that case, inhibiting MOGS for just a few hours might be problematic."


Related:
Confirmed by science: You really can change your DNA
Russians Discover DNA is functioning just like a holographic computer with a biological Internet
Scientists Discover Quadruple Helix: Four Strand DNA In Human Cells
How DNA Is Reprogrammed By Words and Frequencies
Spontaneous Evolution Has Arrived!
Why Staying In Tune With The Earth’s Pulse Is Key To Our Well Being