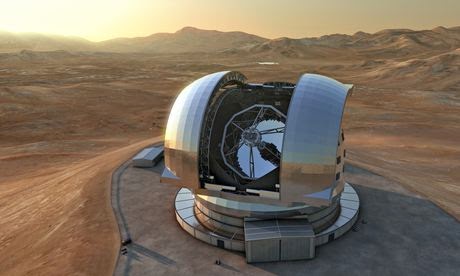 Engineers are about to blast away the top of a Chilean mountain to create a site for the European Extremely Large Telescope. It will allow us, for the first time, to directly observe planets outside the solar system

Cerro Armazones is a crumbling dome of rock that dominates the parched peaks of the Chilean Coast Range north of Santiago. A couple of old concrete platforms and some rusty pipes, parts of the mountain's old weather station, are the only hints that humans have ever taken an interest in this forbidding, arid place. Even the views look alien, with the surrounding boulder-strewn desert bearing a remarkable resemblance to the landscape of Mars.

Dramatic change is coming to Cerro Armazones, however – for in a few weeks, the 10,000ft mountain is going to have its top knocked off. "We are going to blast it with dynamite and then carry off the rubble," says engineer Gird Hudepohl. "We will take about 80ft off the top of the mountain to create a plateau – and when we have done that, we will build the world's biggest telescope there."

Given the peak's remote, inhospitable location that might sound an improbable claim – except for the fact that Hudepohl has done this sort of thing before. He is one of the European Southern Observatory's most experienced engineers and was involved in the decapitation of another nearby mountain, Cerro Paranal, on which his team then erected one of the planet's most sophisticated observatories.

The Paranal complex has been in operation for more than a decade and includes four giant instruments with eight-metre-wide mirrors – known as the Very Large Telescopes or VLTs – as well as control rooms and a labyrinth of underground tunnels linking its instruments. More than 100 astronomers, engineers and support staff work and live there. A few dozen metres below the telescopes, they have a sports complex with a squash court, an indoor football pitch, and a luxurious 110-room residence that has a central swimming pool and a restaurant serving meals and drinks around the clock. Built overlooking one of the world's driest deserts, the place is an amazing oasis. (See box.)

Now the European Southern Observatory, of which Britain is a key member state, wants Hudepohl and his team to repeat this remarkable trick and take the top off Cerro Armazones, which is 20km distant. Though this time they will construct an instrument so huge it will dwarf all the telescopes on Paranal put together, and any other telescope on the planet. When completed, the European Extremely Large Telescope (E-ELT) and its 39-metre mirror will allow astronomers to peer further into space and look further back into the history of the universe than any other astronomical device in existence. Its construction will push telescope-making to its limit, however. Its primary mirror will be made of almost 800 segments – each 1.4 metres in diameter but only a few centimetres thick – which will have to be aligned with microscopic precision.

It is a remarkable juxtaposition: in the midst of utter desolation, scientists have built giant machines engineered to operate with smooth perfection and are now planning to top this achievement by building an even more vast device. The question is: for what purpose? Why go to a remote wilderness in northern Chile and chop down peaks to make homes for some of the planet's most complex scientific hardware?

The answer is straightforward, says Cambridge University astronomer Professor Gerry Gilmore. It is all about water. "The atmosphere here is as dry as you can get and that is critically important. Water molecules obscure the view from telescopes on the ground. It is like trying to peer through mist – for mist is essentially a suspension of water molecules in the air, after all, and they obscure your vision. For a telescope based at sea level that is a major drawback."

"However, if you build your telescope where the atmosphere above you is completely dry, you will get the best possible views of the stars – and there is nowhere on Earth that has air drier than this place. For good measure, the high-altitude winds blow in a smooth, laminar manner above Paranal – like slabs of glass – so images of stars remain remarkably steady as well."

The view of the heavens here is close to perfect, in other words – as an evening stroll around the viewing platform on Paranal demonstrates vividly. During my visit, the Milky Way hung over the observatory like a single white sheet. I could see the four main stars of the Southern Cross; Alpha Centauri, whose unseen companion Proxima Centauri is the closest star to our solar system; the two Magellanic Clouds, satellite galaxies of our own Milky Way; and the Coalsack, an interstellar dust cloud that forms a striking silhouette against the starry Milky Way. None are visible in northern skies and none appear with such brilliance anywhere else on the planet.

Hence the decision to build this extraordinary complex of VLTs. At sunset, each one's housing is opened and the four great telescopes are brought slowly into operation. Each machine is made to rotate and swivel, like football players stretching muscles before a match. Each housing is the size of a block of flats. Yet they move in complete silence, so precise is their engineering.

Building the four VLTs, which have been named Antu (Sun), Kueyen (Moon), Melipal (Southern Cross) and Yepun (Venus) in the language of Mapuche people of Chile, was a formidable challenge, needless to say. Each has a giant mirror that is 8.2 metres in diameter but only 17cm thick: any thicker, and the mirror would be too heavy to move and point. Such thinness leaves the mirrors liable to deform as temperatures and air pressure fluctuate, however, and so each has 150 actuators fitted to its unpolished side. These push the mirrors to keep them within a few billionths of a centimetre of their proper shape. In addition, ESO astronomers use a laser-based system known as adaptive optics to measure turbulence in the upper atmosphere and to change each telescope's internal mirror configuration to compensate for any disturbance they can measure.

The result is a cluster of astronomical devices of incredible power and flexibility, one that has been involved in an astonishing number of critically important discoveries and observations over the past decade, as ESO astronomer Olivier Hainaut explains. "Perhaps the VLT's most spectacular achievement was its tracking of stars at the centre of the Milky Way. Astronomers followed them as they revolved around… nothing. Eventually they were able to show that something incredibly small and dark and massive lay at the centre of this interstellar waltz. This was the first time, we now know, that scientists had directly observed the effect of the supermassive black hole that lies at the heart of our galaxy."

For Schmidtobreick, this ability to collect light quickly is crucial to her research. She studies stars known as cataclysmic variables: pairs of stars in which one is pulling vast amounts of gas, mainly hydrogen, from its companion, a process that can trigger gigantic thermonuclear eruptions, sometimes within 30 seconds or so. "With current instruments, it can take minutes or hours to collect light from these objects, which is too long to resolve what is happening," says Schmidtobreick. "But with the E-ELT, we will be able to study many, many more cataclysmic variables because we will be able to collect significant amounts of light from them in seconds rather than minutes or hours and so will be to resolve their behaviour."

Simone Zaggia, of the Inaf Observatory of Padua, is another frequent visitor to Paranal and has a very different reason for backing the E-ELT. He believes it will play a vital role in the hunt for exoplanets – in particular, exoplanets that are Earth-like and which could support life. "At present, our biggest telescopes can only spot really big exoplanets, giants that are as big as Jupiter and Saturn," he says.

"But we really want to know about the smaller worlds that make up the solar systems in our galaxy. In other words, we want to find out if there are many Earth-like planets in our part of the universe. More importantly we want to find out if their atmospheres contain levels of oxygen or carbon dioxide or methane or other substances that suggest there is life there. To do that, we need a giant telescope like the E-ELT."


European Extremely Large Telescope E-ELT. It's a BIG ONE!!