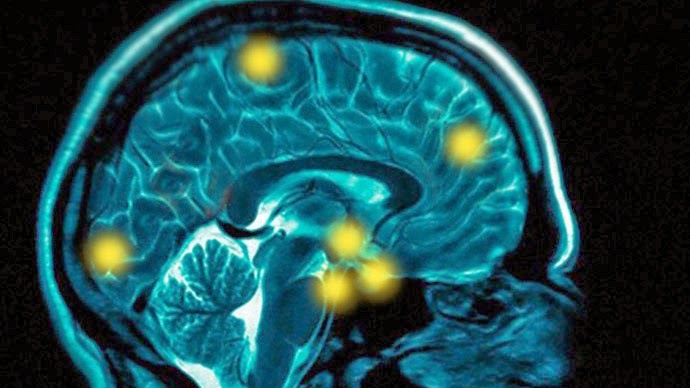 Scientists have revealed the human brain has a 15-second lag that helps stabilize incoming visual information, which we don’t notice bombarding us in the course of our everyday lives.

Eyes tend to receive an enormous information load from dusk till dawn, and as one opens his or her eyes in the morning, the brain starts its intensive work, processing incoming pictures from the surroundings, including imagery from TV screens and computer monitors.

A team of vision scientists at the University of California, Berkeley and Massachusetts Institute of Technology (MIT) revealed this secret of the human brain: To save us from insanity induced by a constantly changing torrent of pictures, shapes and colors – both virtual and real world – the brain filters out information, failing in most cases to notice small changes in a 15-second period of time.

It actually means that what we do see is, in fact, a mixture of past and present. According to the research, published in the journal Nature Neuroscience, stability is attained at the expense of accuracy.

"What you are seeing at the present moment is not a fresh snapshot of the world but rather an average of what you've seen in the past 10 to 15 seconds," said study author Jason Fischer, Ph.D., a neuroscientist at MIT.

The discovery, called a continuity field, at first seems to be yet another optical illusion, good to explain why we miss errors in film editing.

“The continuity field smoothes what would otherwise be a jittery perception of object features over time,” said David Whitney, associate professor of psychology at UC Berkeley and senior author of the study. “Essentially, it pulls together physically but not radically different objects to appear more similar to each other. This is surprising because it means the visual system sacrifices accuracy for the sake of the continuous, stable perception of objects.”

However, according to the scientists, a continuity field is an advantageous mechanism, as it excludes visual ‘noise’. "The changes that continuity fields cause us to miss are most often unimportant," Fischer said.

What is more, without such brain development humans would find the world an unsteady and frightening place to be. It might be similar to a person on hallucinogenic drugs experiencing sudden changes of color, a play of shadows and splashes of light. It would be just too overwhelming to live like this on a daily basis – a severe ordeal for the psyche.

"This is the brain's way of reducing the number of things we have to deal with in the visual environment," said psychologist Aaron Johnson of Concordia University in Montreal; he was not involved in the study, but was interested in its results. "If we were sensitive to every little change, our brains probably couldn't cope."

To establish the existence of a continuity field, the researchers conducted several experiments.

In one of them, participants were asked to look at a series of black-and-white bars, or gratings, that appeared at random angles on a computer screen every five seconds. Then they had to adjust the angle of a white bar so that it matched the angle of each grating they had just viewed. After hundreds of such attention exercises, the researchers learned that the angle of the three most recently viewed gratings influenced the picture greatly.

“Even though the sequence of images was random, the participants’ perception of any given image was biased strongly toward the past several images that came before it,” said Fischer, who calls this phenomenon “perceptual serial dependence.”

In a controlled experiment researchers dispersed the gratings on the computer screen. Now that the gratings were far apart from each other, the participants didn’t merge the angles together. This leads to the conclusion that the continuity field effect starts to work only when objects are close to each other.

Fischer and Whitney also underline that “the strength of this [brain] bias was modulated by attention.” Quite obviously, the influence of the gratings lessened as more time passed.

It turns out lots of familiar objects and faces may not be as real as we are used to thinking. The human brain conceals lots of mysteries. Although it has a 15-second delay in perception, the brain can also work incredibly fast. Neuroscientists from MIT recently found that even if the eye sees an image for as little as 13 milliseconds, the brain can still successfully process it.

In a demonstration of the experiment, shown in the video, study participants view a series of dark bars, or gratings, on a computer screen, which appeared at random angles once every five seconds. Using the computer keyboard's arrow keys, they then adjusted the angle of a white bar so that it matched the angle of each grating they had just viewed. The researchers found that instead of precisely matching the orientation of the grating, participants averaged out the angle of the three most recently viewed gratings.

Related:
Proof That The Pineal Gland Is Literally A 3rd Eye
Nothing is solid: Why you should be aware of Quantum Physics
Reality is Beyond Our Perception
Symptoms Of Spiritual Awakening
Cannabis & The Pineal Gland: Turn On The Third Eye