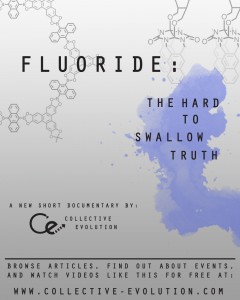 The time has come and the new short documentary ‘Fluoride: The Hard to Swallow Truth’ has been released and is ready to be viewed for free on YouTube.

We highly encourage you to make copies of our work and spread it around as much as you can. For that reason we have made very cost effective DVD’s for others to obtain, watch in full quality and make mass copies of to share. You can buy DVD copies in paper sleeve made for mass duplication here!

Synopsis:
This short documentary looks at the initial theories behind the effectiveness of fluoride and where it originated. It goes on to show the lack of science behind the use of Fluoride and reveals Fluoride as a toxic waste substance that is being pumped into our drinking water. The documentary will conclude by delivering the “hard to swallow truth” of fluoride which pertains to why it is actually used.

Now if you still didn't have enough, more about tap water:

You’ve probably read countless articles about the horrendous quality of tap water and its numerous contaminants that attack your biology and have been tied to a multitude of health ailments. It is very rare, however, that you can actually see just how terribly polluted your tap water truly is.

Dr. Paul Connett is a graduate of Cambridge University and holds a Ph.D. in chemistry from Dartmouth College. Paul is the Executive Director of the Fluoride Action Network and has researched fluoride's toxicity for nearly 11 years. He has given invited presentations to the Fluoridation Forum in Ireland, the Japanese Society for Fluoride Research and the American College of Toxicology.

Conspiracy theories involving fluoridation are common, and include claims that fluoridation was motivated by protecting the U.S. atomic bomb program from litigation, that (as famously parodied in the film Dr. Strangelove) it is part of a Communist or New World Order plot to take over the world, that it was pioneered by a German chemical company to make people submissive to those in power, that behind the scenes it is promoted by the sugary food or phosphate fertilizer or aluminum industries, or that it is a smokescreen to cover failure to provide dental care to the poor. One such theory is that fluoridation was a public-relations ruse sponsored by fluoride polluters such as the aluminum maker Alcoa and the Manhattan Project, with conspirators that included industrialist Andrew Mellon and the Mellon Institute's researcher Gerald J. Cox, the Kettering Laboratory of the University of Cincinnati, the Federal Security Agency's administrator Oscar R. Ewing, and public-relations strategist Edward Bernays. Specific antifluoridation arguments change to match the spirit of the time.

Six time Mr. Olympia champion bodybuilder Dorian Yates warns against drinking fluoride in tap water. Yates explains how fluoride calcifies the pineal gland in the brain, what Rene Descartes called “the seat of the soul,” and claims that it could even be a conspiracy to block humanity reaching higher levels of spiritual awareness.