People Worldwide claim their Sovereignty [updated, thanks to Beatrix stepping down]

Individuals Worldwide are declaring their Sovereignty.

The inhabitants of Gallifa, a village in the mountains of Catalonia, refuse any longer to pay taxes to the Spanish state.

Instead, paid directly to the Catalan government. They find that more than justified, because too many of their own resources are distributed across the rest of Spain.
The village with 200 inhabitants declared themselves 'fiscally sovereign' states. Other villages in the area, just before the Catalan elections claimed their sovereignty as well.

Free and sovereign territory
It is a symbolic gesture. "We still pay our taxes," explained Mayor Jordi Gallifa Fornes out. "The only difference is that we no longer pay to the Spanish authorities, but the Catalan Treasury.
"We have set ourselves last September 2012 declared free and sovereign territory," he added. The regional president Artur Mas has promised a referendum if he wins elections. Gallifa and over 100 other villages have been declared to be sovereign.

A group of young Greeks, changed the busy city for the slopes of Telaithrion on Evia Island to participate in a self-sufficient rural community.
Their goal is simply self-grown organic food to eat, to free themselves from the power and money to replace barter/trading goods.
The group would eventually open a school that people must learn how to live sustainably. The project was started by four Athenians who met together in 2008 on the internet out of dissatisfaction with the tiring city life.

Christiania, also known as Freetown Christiania (Danish: Fristaden Christiania) is a self-proclaimed autonomous neighbourhood of about 850 residents, covering 34 hectares (84 acres) in the borough of Christianshavn in the Danish capital Copenhagen. Civic authorities in Copenhagen regard Christiania as a large commune, but the area has a unique status in that it is regulated by a special law, the Christiania Law of 1989 which transfers parts of the supervision of the area from the municipality of Copenhagen to the state. It was closed by residents in April 2011, whilst discussions continued with the Danish government as to its future, but is now open again.
Christiania has been a source of controversy since its creation in a squatted military area in 1971. It's cannabis trade was tolerated by authorities until 2004. Since then, measures for normalising the legal status of the community have led to conflicts, and negotiations are ongoing.
Among many Christiania residents, the community is known as staden ('the town'), short for fristaden ('the freetown'). 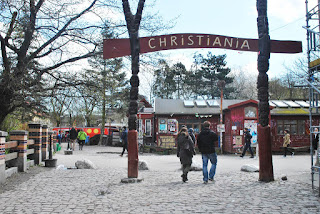 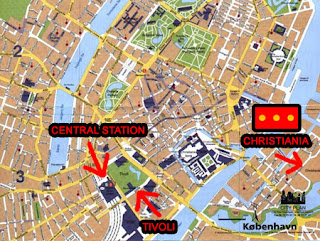 Meanwhile, in The Netherlands hundreds of individual people are declaring themselves Sovereign last years from the Government & Queen to be free Universal Beings. Queen Beatrix declared 28 januari 2013 to leave the sinking Bilderberg ship to be sovereign too? Probably some kind of Super-Sovereignty then maybe. A big portion of the16 million Dutch population's taxes goes to the 'Dutch House of Royalties' and a salary raise for all 'royal' people guaranteed every year.  If there weren't any private organisations with generous unselfish individuals taking care of the elderly, hungry, homeless, violated, abandonded & traumatized people, the latter could not live one month.

Her father, prins Bernhard, founded on 29-31 may 1954 the Bilderberggroup in hotel de Bilderberg, Oosterbeek near the city of Arnhem [Netherlands]. He was member of the German SS befóre WWII. The Dutch parliament knew this fact. See the picture [on the right] of Bernhard standing next to his wife Queen Juliana after their wedding in 1937 in company of fellow SS-collegues some raising there right arm to Hitler.They founded The Kaiser Wilhelm Institute and same sort of institutions which had the same ideas about the socalled inferiority of non-white ethnic groups, poor people, disabled persons & unemployed people, about registrationtechniques (IBM), marriagelaws, sterilisation and gaschambers (!), funded directly from the USA..
The Rockefeller family is the institute's most important financier. Also Josef Mengeles' experiments are financed by Rockefeller's Brothers. Later they would blame this family as 'founding member’ of eugenetics with Edmond de Rothschild and Prins Bernhard who founded the Bilderberggroep with it's globalistisc agenda.

Just presenting the facts not to burn down the members of the Dutch 'royal family'.
Oops, or did I just do that?
Maybe because the Dutch 'royal family' doesn't exist at all? These 'royals', we watch them here wrapped in scandals for last decades if not hundreds of years. Supported by our Government all the time. And we elected these people.

So far hundreds of Dutch people filed the official & legal documents in a 4-step-proces to separate themselves from this monarchy to be sovereign human beings and with success! Although some encounter opposition & counteraction from the government they persistently continue their freedomfight.

Interesing:
How big is your world?

Dutch veterans in trouble are finally compensated.
What a strange planet [email to my homeplanet]
Who Runs The World?