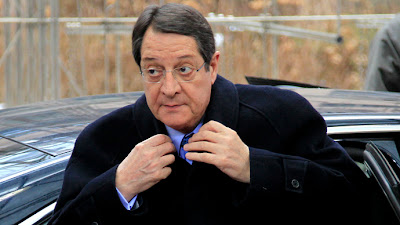 The president demands an investigation.

During two days, 12 and 13 of March, the company A.Loutsios & Sons Ltd., co-owned by Loutsios John, the husband of Nikos Anastasiadis’ daughter, Elsa, took five promissory notes worth €21 million from Laiki Bank. The money was then transferred to London, reported Cypriot newspaper Haravgi, affiliated to the communist-rooted AKEL party.

The withdrawal was fulfilled just three days before the Eurogroup meeting when euro finance ministers agreed a 10 billion euro ($13 billion) bailout for Cyprus.

The company, however, has firmly denied the reports.

The newspaper recalls that Cyprus Finance Minister, Michalis Sarris, publically admitted that the government was aware in advance about the Eurogroup’s intentions to impose a “haircut” on bank deposits of more than 100,000 euros.

Spokesman of AKEL, Stavros Evagorou, has called on the investigation committee to check the information regarding money withdrawal by Anastasiades’ family members as well as other reports about money transfer from the country on the eve of the Eurogroups’ levy decision.

Responding to the allegations, President Anastasiades called the publication an “attempt to defame companies or people linked to my family”.

“[This] is nothing but an attempt to distract people from the liability of those who led the country to a state of bankruptcy,” Anastasiades said.

The president stressed that no one, including himself, will walk free from the on-going investigations looking into responsibility for the crisis that has engulfed the Cypriot economy.

Moreover, Anastasiades assured that when the investigative committee assembled on Tuesday, he would request that its members look into this particular case.

Earlier in March the Eurogroup proposed the Cypriot government impose a new tax that would make citizens shoulder a 12.5-percent crisis tax on savings larger than €100,000, with a tax of 3 percent on smaller deposits.

The initial agreement suggested 9.9 and 6.7 percent levies on deposits above and below the €100,000 threshold respectively.

At dawn of March 25, Cyprus and the troika of international backers (EU, ECB, IMF) reached agreement on a €10bn bailout plan, aimed at preventing the bankruptcy of the island’s financial system and the country’s exit from the Eurozone.

The depositors holding over 100,000 euros at the Bank of Cyprus will lose 37.5 per cent in money in exchange for bank shares. These big depositors may further lose up to 22.5 per cent more if the experts consider bank’s balance insufficient.

This means that those with big deposits in Cyprus’ largest bank could lose could lose up to 60 percent of their savings in a harsh new EU and IMF bailout deal. Those with deposits less than 100,000 euros will be protected under the Cyprus deposit guarantee.

At the same time, under the bailout deal between the eurozone finance ministers and Cyprus, the country’s second largest bank Laiki will effectively be shut down in order to set up a "good bank" and a "bad bank".

Deposits below €100,000 will be shifted from Laiki to the Bank of Cyprus to create a “good bank.” Deposits larger than €100,000, which are not guaranteed under EU law, will be frozen and used to resolve debts.

With every passing day, it becomes clearer and clearer the Cyprus deposit confiscation "news" was the most unsurprising outcome for the nation's financial system and was known by virtually everyone on the ground days and weeks in advance: first it was disclosed that Russians had been pulling their  money, then it was suggested the president himself had made sure some €21 million of his family's money was parked safely in London, then we showed a massive surge in Cyprus deposit outflows in February, and now the latest news is that a list of 132 companies and individuals has emerged who withdrew their €-denominated deposits in the two weeks from March 1 to March 15, among which the previously noted company Loutsios & Sons which is alleged to have ties with the current Cypriot president Anastasiadis.

Money transfers made within 15 days, namely from 1 until March 15. On Friday, March 15, had met the Eurogroup, which officially decided to impose a tax on deposits by companies and individuals in all financial institutions in Cyprus.

These 132 companies and individuals have withdrawn all deposits in euros, dollars and rubles, which were transferred to other banks outside Cyprus.

The disclosure of the list, which shows that the outflow of deposits from local banks other financial institutions outside Cyprus became massively raises suspicion that some had inside information about the decisions taken by the other 16 eurozone countries in exchange for financing deficits of the economy.

In listings, and the company is Loutsios & Sons Ltd, which carried 21 million deposit in a UK bank, while the owner of the company is alleged to have family ties with the President of the Republic, Nikos Anastasiadis. 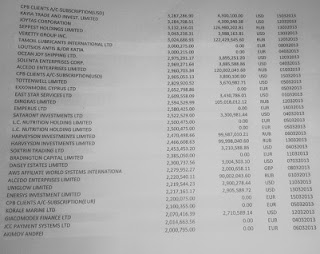 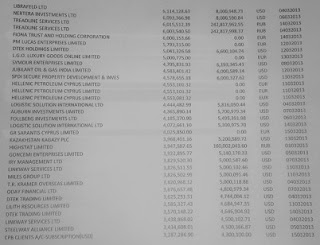 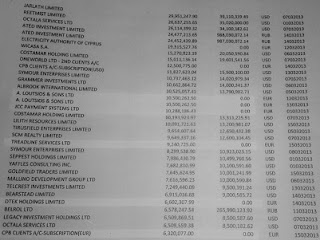 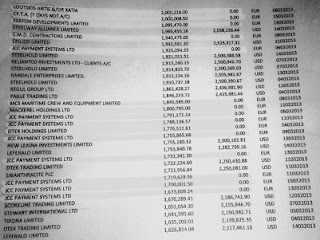 Email ThisBlogThis!Share to TwitterShare to FacebookShare to Pinterest
Labels: Cyprus