The Cosmic pattern of Creation that builds our illusions 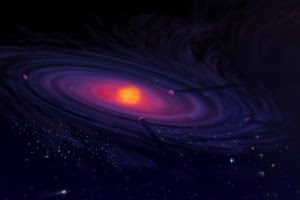 Editor’s Note: As a primer, please enjoy the first part of this article, Reality is Beyond Our Perception

Looking to outer space you find countless stars, suns, like the star of this solar system, with planets of their own in orbit. Constantly moving and vibrating, they follow the same universal laws of all, as do the atom and the microcosmic solar system. Indeed, anywhere we look in life, be it outer space or inner space, everything is either atoms or solar systems. They are like octaves of the same thing - micro-/macrocosms. There is nothing else. What is a building? A tree? They, and anything else that seems to be something else, are but an assembly of atoms/solar systems. I can’t emphasise the significance of this enough. It is one of the most important facts there is, and understanding its full meaning is one of the great keys to understanding the universe and our lives.

The next great key can also be seen with atoms and solar systems – their orbital pattern, their orbital relationship. It is the one primary pattern in the universe. It pervades everything, and all else is built upon it. It is what our human male/female relationships are based on. It is what makes soulmates soul mates. But aren’t orbits separate things amongst separate solar systems or atoms? How could this pattern be what everything in the universe is built upon? And how could it be what human relationships are based on? Look into space at night. Each shining star you see is either a sun – an object radiating light that is surrounded by and orbited by planets – or a planet, giving off light reflected from the light of a star. Study what scientists have discovered about the solid objects that surround us – water, trees, buildings, stones, Earth, plants, human bodies; they are all made of atoms.

What if it goes on infinitely like a never ending spiral? It must. It is the pattern of creation, of the universal spirit. If you contemplate it for a while, the pattern of an atom or solar system is, in a sense, the only reality. It is the primary form of life in the universe. This pattern is the basis of the building blocks of our illusions. And what does it comprise? This amazing, all-pervasive pattern consists of individual parts that function as one. This oneness is achieved by virtue of the nature of the polarities of the individual parts – plus/minus, male/female. Electrons of an atom are like the planets of a solar system. They are oppositely charged (the opposite ‘sex’) to the nucleus of an atom, and they are attracted to each other – just as the planets and sun of a solar system are. The polarised parts flow together in a particular way that is dictated by universal law.  The pattern is orbital because of the nature of polarised relationships in space. There is always a centre, a central sphere that gives out energy, and attracts. That central object is surrounded by objects that are attracted to, and attach themselves to, it.

In the case of a solar system, the sun is the centre around which all the planets revolve. In the case of an atom, the centre around which all the electrons revolve is the nucleus. They are the same thing. The momentum of the outer objects (electrons or planets), their speed as they travel through space, becomes a circular movement once they are attracted to and attached to their central object (the sun, a star, or a nucleus). That movement is cyclical. In other words, it keeps orbiting around and around at a certain speed, repeating its cycle in a given period of time, thus creating a vibrational occurrence of cycles per  second/day/year/whatever. In the case of the Earth orbiting the sun, it is one cycle per year. In the case of other planets it is faster or slower. In the case of atoms, it is very, very fast – and different for each atom. Taking this a step further, what if everything is orbiting something, which is also orbiting something else? Then all of them function as one. And a complex vibrational pattern exists.

They each link up with all other objects, becoming a part of their flow and one with them. In the entirety of the universe, all things are interconnected as one in this way. And the basis of this is the universal pattern we see exemplified so perfectly in the atom or star systems. It follows and reflects universal law perfectly. This pattern flows in perfect harmony with universal order.

What if this form, this pattern, represents the relationships of beings? What if each atom is a conscious being composed of soulmate beings? What if each solar system is a conscious being composed of soulmate beings (each planet and sun is a being, in and of itself, that together make one being)? What if every being plays two roles, like both parent and child at the same time – surrendering to something, and directing something? What if every star is both in an outflowing, positive polarity, directing position to its planets, but is also like a planet to something else that it orbits?  What if the planets take a receptive, negative polarity, surrendering posture to a sun, but function like a sun to something else that orbits it, or is affected by it?

According to the teachings, all of the above is true. Many, many things can be learned and understood by contemplating the above concept. Contemplation of this pattern has guided the understanding of masters, in all matters of universal and earthly life, and thus can also provide the contemplative seeker with profound answers. Truly understanding the meaning of this pattern, and applying it to human life, can provide the deepest understanding of the nature of men and women, and male/female relationships. It is the perfect pattern of the harmonious interaction of polar opposites. Thus, with contemplation, it can show us the way to have perfect relationships, helping us achieve perfectly harmonious interaction with our own soulmates and other humans.

Another issue is the question of equality between men and women. Well there is no equality amongst anybody, other that our souls were very much equal when we were originally individualized (so-called created in the image of the Creator), but since then, because of our different decisions, desires and choices, we now have different Karma, talents and aspirations and therefore are not equal by any stretch of the imagination other than the rights the Universal laws we live under, give us. The opportunities to again become equal to the Creator and all others are still there for all the souls that chose to follow that path.

All Is Vibration. All Vibration Follows Universal Law. All Gives. All Receives. All Loves. All Vibration Seeks its own Level. To find any Level, Set forth the Vibration. By Law you Will Go there, By Law it Will come. Always is there a Greater Vibration. Always is there a Lesser Vibration. In Harmony With Universal Law, All Vibration moves as One Flow, Interrupt the Flow only to Find In This Natural Order thus does it Go, In Forever Passing Through, Divided in Two, Receptivity be the Way of Emptiness, The One calls to Come and Fill, Giving be the Way of Abundance, The One Flows forth to Fill, Always then the Way of the Flow, Dependence on That Which is Above. The Object of Dependence, To that Which is Below, Two will Repel, Two will Attract, Two will Together, Interact, Look then to Four, For All that Need Be, For All Creation, Vibration Be. One. Two. One and Two. Three. One and Two Beget Four. Thus Opens the Infinite Door. Yod He Vau He, Pronounce it Right To Open The Gates of Heaven, And Live in the Light.

Build Ye Life As The Pyr-a-mid, *Four Corners Converge Above With Fire in the Middle, The Fire of Love, Life, Mind, Truth, Spirit.

Energy Great, Does Course Through This Earth, Collect and Direct, if it Be Your Will, with the Shape of The Temple, pure Stones and Gold Laden Box. Or With The Mind, Focused and Pure Lowered in Vibration, To Ten in Meditation. Vibration Does Flow, In Body and Soul. High and Low, In All Flesh is Written, Tune may you to the Right Vibrations, Colours and Sounds, That Change What We Know, Use Them May You, to Heal, Sow, and Grow. Power Great, Above and Below, Key Are Vibrations, Secret but to Few, Find them You Will, By Measure and Trial, And Use of the Word, That Rules All Creation. Describe A Rainbow, To a Blind Man Will You? Open Your Eyes. Senses Five, Does Man Perceive. The Focus on Self, Restricts All That Is. Limited in Scope, The Ocean not Seen. A Drop of Rain, He Believes Is His World. So as He Believes, So He Shall Be. So Let it Be Written. Everything Orbits Something. All Matter Is As The Universe, Stars, Planets, Time and Space.

From the other side with Love

On behalf of Leinep Noj, I am humbly Rene’ Descartes.

Rene’ Descartes is a frustrated desert veggie farmer in South Africa who ponders and wonders much about truth. Having sailed around the world on a small yacht over a 4 year period, Rene’ is now interested in healing the terminally ill and in being of assistance to the all the souls entering earth right now. Email Rene’ at Shamballa@wispernet.co.za.

This article is offered under Creative Commons license. It’s okay to republish it anywhere as long as attribution bio is included and all links remain intact.
Geplaatst door Boddhi op Tuesday, April 09, 2013