When the banks drive us into poverty, what is the solution? 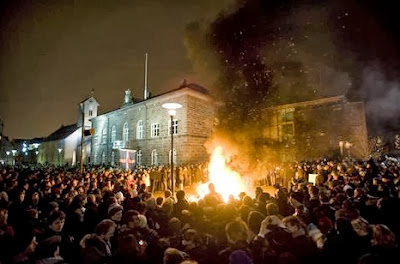 Kick 'm out. Yes we can.. Iceland did it. They chose democracy & human rights over banks interest.


Iceland is free. The people of Iceland are free from austerity measures or interestpayments. And it will remain so, so long as her people wish to remain autonomous of the foreign domination of her would-be masters — in this case, international bankers.

The government of Iceland has forgiven the mortgage debt for much of its population. This nation chose a very different way of stopping the crisis from the rest of European countries. It decided to hear the requests of the population and to put politicians and bankers on the bench of the accused three years after their financial excesses would sank one of the most prosperous economies in 2008.

This is just the latest in the long drama since 2008 of global institutions refusing to take losses in the financial crisis.  Threats of a global economic depression and claims of being “too big to fail” have equated to a loaded gun to the heads of representative governments in the U.S. and Europe.

Iceland is of particular interest because it did not bail out its banks like Ireland,  The Netherlands or the U.S. did. They went bankrupt and were kicked our of Iceland.

If that fervor catches on amongst taxpayers worldwide, as it has in Iceland and with the tea party movement in America, the banks would have something to fear; that is, the inability to draw from limitless amounts of funding from gullible government officials and central banks.  It appears that the root cause is government guarantees, whether explicit or implicit, on risk-taking by the banks.

Ultimately, such guarantees are not necessary to maintain full employment or even prop up an economy with growth, they are simply designed to allow these international institutions to overleverage and increase their profit margins in good times — and to avoid catastrophic losses in bad times.

The lesson here is instructive across the pond, but it is a chilling one.  If the U.S. — or any sovereign for that matter — attempts to restructure their debts, or to force private investors to take a haircut on their own foolish gambles, these international institutions have promised the equivalent of economic war in response.  However, the alternative is for representative governments to sacrifice their independence to a cadre of faceless bankers who share no allegiance to any nation.

It is the conflict that has already defined the beginning of the 21st Century.  The question is whether free peoples will choose to remain free, as Iceland has, or to submit.
celand didn't bow to austerty and went sovereign from the banksters.

Quote from Icelands President Olafur Ragnar Grimsson :
"These banks are private companies with shareholders who failed, why should ordinary people pay the price?"

Related:
How The British Banking Industry Became An Organised Crime Enterprise
Who Runs The World?
Iceland President: Let the Banks Fail
The House of Rothschild