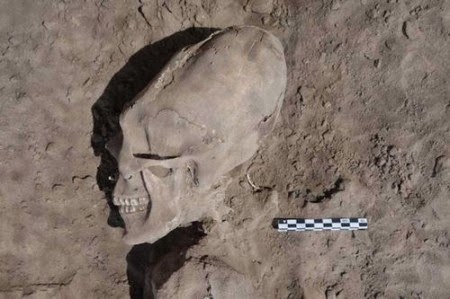 So much of what we have been taught about ancient history is simply not true.  According to Mexico’s National Institute of Anthropology and History, a team of archaeologists working close to the Mexican village of Onavas has made an amazing discovery.


They reportedly found 13 ancient human specimens that had grossly elongated skulls.  You can find original photographs of this discovery right here, but the descriptions of the photos are in Spanish.  The Mexican scientists are telling us that these skulls are approximately 1,000 years old, and that no skulls of this nature have ever been found in this region of Mexico before.  So exactly what is going on here?

Are these elongated skulls simply the product of an ancient technique known as “cradle-boarding”, or is there another explanation?  Could these actually be Nephilim skulls that prove that an ancient race of hybrids once roamed the planet?  You might want to hold on to your hat – because the truth might shock you.

This group of elongated skulls in Mexico made headlines all over the globe when it was initially discovered.  A lot of people were really freaked out because a number of these skulls definitely do not look human at first glance.  A short video report about this discovery in Spanish is posted below…

However, it does not explain all of them.  In fact, some elongated skull specimens have been found that could not have been produced by cradle-boarding.  Paranormal researcher L.A. Marzulli explained why this is the case during an appearance on Coast to Coast AM earlier this year…

In Paracas, on the coast of Peru, he and Richard Shaw, the director of the ‘Watcher’ series, visited a necropolis, a huge desert cemetery, and a museum that had some forty skulls originally from the graveyard. While some of the elongated heads were shaped by “cradle-boarding,” a type of skull binding that led to cranial deformation, others appear to be genuinely anomalous, having just one parietal plate, he detailed. Some of the skulls also have a large pronounced ridge, and a heart-shaped dome in the rear that can’t be achieved through cradle-boarding, he continued. “I believe we are looking at some sort of genetic manipulation…that are the remains of the Nephilim,” from around 3,000 to 3,500 years ago, he added.

For much more on this, check out the video that I have posted below of Sid Roth interviewing L.A. Marzulli about this amazing discovery in Peru…

Yes, without a doubt many elongated skull specimens were caused by cradle-boarding children when they were young.

But where did those ancient tribes get that idea?

Were they trying to emulate something that they had seen before?

Were they trying to emulate a race of people that had been ruling over them at some point?

Brien Foerster is another expert that has looked into this extensively.  According to him, there is no possible way that some of the specimens in Peru could have been created through the process of deliberate cranial deformation.
The following is a short excerpt from a recent article by April Holloway…

Brien Foerster, author and expert on elongated skulls, has presented some of the most spectacular research on the subject. He has found that while most skulls show clear signs of deliberate cranial deformation, there are a percentage of skulls, namely those found in Paracus, Peru, which are anatomically different and which cannot be explained by practices of head flattening. These skulls, he said, have a cranial volume that is 25% larger than conventional human skulls (cranial deformation does not increase volume), and which weigh 60% more. Brien Foerster outlines further differences: 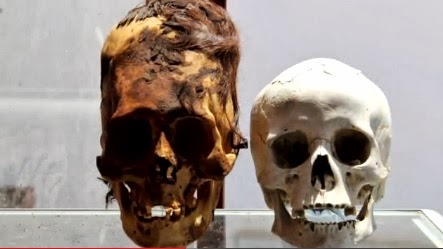 “They contain two small holes in the back of the skull, perpendicular to the cranial suture present in the parietal plate of the skull. Every normal human skull is composed of 3 major bone plates; the frontal plate, which ends at the upper part of the forehead, and the 2 parietal plates which lie behind this, intersecting the frontal plate making a “T” shape. The holes are thought by Lloyd to be natural; every human jaw has a small hole on either side which is for nerves and blood vessels to exit and feed the tissue there; these 2 holes at the back of the skull may perform the same function for the elongated skull. The other factor is that there is only one parietal plate, where there should be two.”

But most scientists ignore this information because it does not fit in with their accepted version of ancient history.

Fortunately, there are some areas of science that are starting to catch up with the truth a little bit.  For example, the following is from a recent Huffington Post article entitled “Ancient Humans Had Sex With Mystery Species, New DNA Study Shows“…

The ancient genomes, one from a Neanderthal and one from a different archaic human group, the Denisovans, were presented on 18 November at a meeting at the Royal Society in London. They suggest that interbreeding went on between the members of several ancient human-like groups living in Europe and Asia more than 30,000 years ago, including an as-yet unknown human ancestor from Asia.

“What it begins to suggest is that we’re looking at a ‘Lord of the Rings’-type world — that there were many hominid populations,” says Mark Thomas, an evolutionary geneticist at University College London who was at the meeting but was not involved in the work.

Yes, the ancient world was most definitely more of a “Lord of the Rings-type world” than most people would ever dare to imagine.

Now of course the scientists in that article are still really grasping for straws to explain what the data is telling them.  The theories that they present to the media as “facts” are really just theories that they have pulled out of their own imaginations.

But what these scientists are starting to realize is that some really strange things happened to the human genome in the ancient world, and that is what the ancient texts have been telling us all along.

Many ancient texts (including the Bible) tell us that long ago a group of fallen angels mated with human women and produced a race of hybrid creatures known as the Nephilim.

"There were giants in the earth in those days; and also after that, when the sons of God came in unto the daughters of men, and they bare children to them, the same became mighty men which were of old, men of renown."  Genesis 6:4.

In addition to the incredible testimony contained in these ancient texts, we also have physical evidence of this race of creatures still with us today.  In a previous article entitled “Has An Ancient Giant Handprint Been Found In A Cave In Nevada?“, I discussed some examples of this evidence including a giant footprint, a photo of a giant finger and a giant handprint that has been preserved in a cave in Nevada.

But the reality of the matter is that a group of giants could actually be protesting in front of the White House right now and a lot of people still would not believe this stuff.

Because it simply does not fit in with what they have been taught all of their lives.  According to the textbooks, none of this evidence is supposed to exist.  So most people will continue to ignore what is right in front of their eyes.

But the truth is out there – you just have got to be willing to go where it takes you.