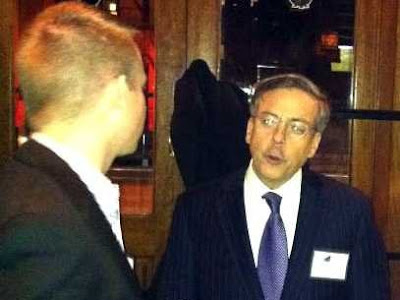 Sidney Goodfriend speaking with a veteran at a recent ACP event


Like many working on Wall Street, Sidney Goodfriend has an impressive resume.

After graduating from Johns Hopkins and getting an MBA from Columbia, he started trading stocks and began a long and lucrative career starting at Merrill Lynch and ending at Credit Suisse.

What happened after his 24-year investment banking tenure is perhaps even more impressive.
In 2008, he dipped into his own money to start an organization dedicated to helping military members ease their transition from the service: American Corporate Partners (ACP).
"Since 9/11, I found myself very appreciative of the freedoms and opportunities my family and I enjoyed," Goodfriend told Business Insider. "I wanted to do something different and I wanted to see if there was a way that I could make a contribution."

ACP partnered with six companies to create a unique mentoring program — pairing corporate executives with military members trying to figure out their next move.
His contribution paid off. Goodfried took ACP from just a handful of partner companies at founding to now more than 40, including two universities and two hospitals. "They all provide mentors, and all the corporations provide funding," Goodfriend said.

Unlike traditional jobs programs, ACP offers guidance from experienced professionals to job seekers in their chosen field. These mentors volunteer to be paired with a veteran protégé for one year — speaking with or meeting regularly to find out goals, and outline steps the veteran needs to take to get there.

"Most people want to help, but they don't know how, outside of writing a check," Goodfriend said.
Some of the several thousand veterans that have gone through the program have seen impressive volunteer mentors, including NYC Mayor Michael Bloomberg, Home Depot CEO Frank Blake, Barclays CEO Bob Diamond, and media mogul Rupert Murdoch.
"Many of our mentors tell us they get just as much out of the program that the veterans do," he said.

But what are the veterans getting out of the program? From the lengthy "success stories" page on the ACP website, it looks like quite a bit.

"I believe the mentorship program and the professional workshops have been directly responsible for me having seven interviews in the last few weeks," writes William, a U.S. Army veteran, "and accepting a position with a corporation that has great opportunities in both management and train transportation services."

For Goodfriend, who receives no compensation from ACP, he sees the organization as serving two goals — helping as many veterans as possible who are coming home to a civilian career, and encouraging others to stand up and help those who served.

"The people receiving, the folks who served — they don't view it as a charity," Goodfriend said. "They see this only as seeking advice and guidance from a person they respect."

Disclosure: The author went through the ACP mentoring program in 2011.

Email ThisBlogThis!Share to TwitterShare to FacebookShare to Pinterest
Labels: veterans