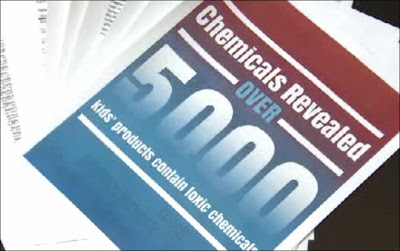 More than 5,000 products, including clothing, toys and bedding, contain toxic chemicals that could be dangerous for children’s health, yet stores still stock them and consumers know little about their content, an advocacy group reported this week.


"For most products in our homes, including children’s products, we simply don’t have standards," said Erika Schreder, science director for the Washington Toxics Coalition and author of the report released Wednesday based on toxic chemical data from Washington state. "Manufacturers are allowed to use just about anything they want to."

The report, called "Chemicals Revealed," identified more than 5,000 products such as footwear, car seats and arts and crafts supplies that include developmental or reproductive toxins and carcinogens. Those include such toxic metals as mercury, cadmium, cobalt, antimony and molybdenum. Manufacturers also reported using phthalates in clothing, toys, bedding and baby products. Phthalates, hormone-disrupting chemicals, most are often used to make plastics pliable.

The Washington Toxics Coalition and Safer States, a coalition of consumer advocacy groups, looked at products sold in Washington state. The state in 2008 began requiring retailers to report whether they’re selling products that contain one of 66 chemicals identified by the state as being of high concern to children.

Major retailers who reported using the chemicals in their products include Walmart, Gap, Gymboree, Hallmark and H&M.

Retailers aren’t required to report the exact product, however, just product categories. The report identified Hallmark party hats containing cancer-causing arsenic, for example, but because of the limited data that manufacturers and retailers are required to disclose, it’s impossible to specify the exact party hat.

Among the other products identified in the report: Graco car seats containing the toxic flame retardant tetrabromobisphenol A, Claire’s cosmetics containing cancer-causing formaldehyde, and Walmart dolls containing hormone-disrupting bisphenol A.

The groups praised manufacturers and retailers for providing even limited data, saying that the information is critical for understanding the presence of toxic chemicals. Yet to truly protect children, Schreder said, manufacturers need to identify safer ways to make their products and stop using harmful chemicals. The organization also backs efforts to ban two fire retardants in Washington state.

To find out more, consumers must press the individual retailers and manufacturers for more information, said Sarah Doll of Safer States, which is part of a network of environmental health groups nationwide.

“The biggest thing that this does is to demonstrate a system that’s broken, and to ask for better protection,” Doll said. “You can actually go to the retailer and say, ‘I want you to ask your suppliers if these products contain those chemicals.’”

Only Maine has a similar program, but other states may follow Washington’s lead in the absence of federal rules. A federal Government Accountability Office report issued in March found that the Environmental Protection Agency is limited under the Toxic Substances Control Act authority.

Of the 83 chemicals EPA has prioritized for risk assessment, the agency initiated seven assessments in 2012 and plans to start 18 additional assessments this year and next, the GAO report found.

The report also found it may take several years to complete these initial risk assessments and, at the agency’s current pace, more than a decade to complete all 83. The EPA does not have the toxicity and exposure data needed for 58 of the 83 chemicals prioritized for risk assessment, the report found.

Two Democratic senators, Frank Lautenberg of New Jersey and Kirsten Gillibrand of New York, introduced the Safe Chemicals Act of 2013, which would give the EPA more tools to collect health and safety information on chemicals, screen them for safety and require risk management when chemicals cannot be proven safe.

"The one saving grace of our national chemical policy is that it at least allows the states to act. Right now they are shedding the only light we have on what toxic chemicals end up in products," said Andy Igrejas, executive director of the Washington, D.C.-based Safer Chemicals, Healthy Families, an organization of state groups devoted to reducing the toxicity of consumer goods.