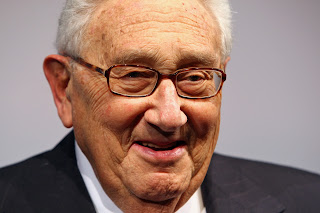 Former Secretary of State Henry Kissinger was confronted and labeled a "mass murderer" by We Are Change's Luke Rudkowski during an event at which Kissinger was awarded a medal for his role in promoting "freedom and democracy."
Alex Jones reported it at infowars:


In the video below, Rockefeller protégé and operative Henry Kissinger calls for the United States and the authoritarian government of China to work together to create a globalist totalitarian government.


"The challenge is,” Kissinger told the Asia Society last week, “how to build a world order for the first time in history on a global basis. We talk a lot about world community but the fact is there has never been a world community before” and he then suggested China and the U.S. collaborate on such an effort.

David Rockefeller has paid homage to the communist Chairman Mao, the most prolific mass murderer of the 20th century (responsible for the liquidation of between 49-78,000,000 Chinese).

Rockefeller regards Mao as an ideal leader and the communist revolution and its murderous political purges as a template for world government.

“Whatever the price of the Chinese revolution [an indirect reference to millions killed] , it has obviously succeeded not only in producing more efficient and dedicated administration, but also in fostering high morale and community of purpose… The social experiment in China under Chairman Mao’s leadership is one of the most important and successful in human history,” Rockefeller wrote for the New York Times on August 10, 1973.

Rockefeller lavished praise on Mao and the communists three years before the end of the Cultural Revolution in China. Conservative estimates of the death toll exacted by Mao’s cultural purge exceed 30 million people.

Rockefeller’s trusted minion, Henry Kissinger, believes now is the time to export what Mao did in China to the entire world.