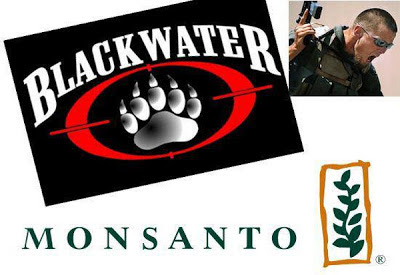 Remember the private mercenary army Blackwater that caused such a stir in Iraq during an unprovoked attack in 2007?


Apparently, Monsanto and the controversial security firm are in bed together, described by blogger Randy Ananda as “a death-tech firm weds a hit squad.” At this point, you might be wondering what in the world the GM seed giant needs with the services of a ‘shadow army’? It appears as though the corporation found it necessary to contract with Blackwater in order to collect intelligence on anti-Monsanto activists as well infiltrate their ranks.

Notorious for the Iraqi Nisour Square Massacre, Blackwater “created a web of more than 30 shell companies or subsidiaries in part to obtain millions of dollars in American government contracts after the security company came under intense criticism for reckless conduct in Iraq,” reports the New York Times. One of these subsidiaries became Total Intelligence, the company contracted by Monsanto between 2008-2010 to collect intelligence on activists rallying against GMO crops and other Monsanto activities. Journalist Jeremy Scahill states in The Nation:

“… entities closely linked to the private security firm Blackwater have provided intelligence, training and security services to US and foreign governments as well as several multinational corporations, including Monsanto, Chevron, the Walt Disney Company, Royal Caribbean Cruise Lines and banking giants Deutsche Bank and Barclays, according to documents obtained byThe Nation. Blackwater’s work for corporations and government agencies was contracted using two companies owned by Blackwater’s owner and founder, Erik Prince: Total Intelligence Solutions and the Terrorism Research Center (TRC). Prince is listed as the chairman of both companies in internal company documents, which show how the web of companies functions as a highly coordinated operation.”


A spokesperson representing Monsanto admits the company hired Total Intelligence for information “… about the activities of groups or individuals that could pose a risk to company personnel or operations around the world which were developed by monitoring local media reports and other publicly available information. The subject matter ranged from information regarding terrorist incidents in Asia or kidnappings in Central America to scanning the content of activist blogs and websites.”

However, what the spokesperson fails to address is that according to documents secured by Scahill, Monsanto was willing to pay a sizable sum (up to $500,000) for Blackwater agents to infiltrate anti-Monsanto organizations.

As the plot continues to thicken regarding Monsanto’s tactics of domination, Ananda aptly notes:

“… Monsanto, by hiring a mercenary army and former CIA field agents, is deadly serious about protecting its deadly products. Yet, this contract further discredits the company. The public can now paint an even bleaker picture of the firm that brought us Agent Orange, PCBs, rBST, DDT, aspartame and, now, hit men.”