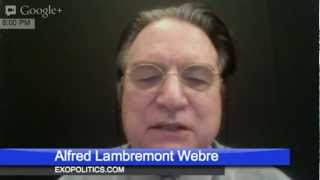 
Upon investigation there is an emerging pattern of forensic evidence demonstrating anomalous eye movements among leaders in a faction of UFO/ET "Disclosure" advocates that bears serious further examination and that may be an indication of their witting or unwitting functional brain-mind entrainment by manipulatory extraterrestrials or advanced military-intelligence nanotechnology.

Major UFO/ET "Disclosure" advocates demonstrating these anomalous eye movements include the Citizen Hearing director/organizer, Stephen Bassett, and two leading witnesses, Antonio Huneeus of OpenMindsTV, and Dr. Steven Greer of the Disclosure Project, all of whom presented testimony before five former members of the U.S. Congress at the recent Citizen Hearing on Disclosure held April 29-May 3, 2013 at the National Press Club in Washington, DC, each seeking a policy of self-disclosure by the U.S. government of an “extraterrestrial presence” without any informed consent from the citizenry, such as a national referendum.


The above video is a composite of the opening segment an October 5, 2011 ExopoliticsTV interview with Alfred Lambremont Webre, where Citizen Hearing director Stephen Bassett exhibits anomalous eye movements at 00:16 into the original video interview.


This video also focuses briefly on other possible anomalous eye movements at the Citizen Hearing by persons adjacent to Antonio Huneeus.

Antonio Huneeus’ anomalous eye movements are sufficiently vivid that Alejandro Rojas, Antonio Huneeus’ colleague at OpenMindsTV, comments: “OMG, this is soooooo creepy. I﻿ work with this guy!”. Nicole Anderson comments: “What the heck was that?! He sure is funny looking, made me laugh!! But seriously, what an odd ‘person’. I don't care HOW nervous I would be, I still wouldn't look like﻿ an alien......something’s wrong there....def wrong....”

Video  –  This 3:23 video by Spanish journalist Rafael Palacios and author of the book “Extraterrestres: el secreto major guardado” ["Extraterrestrials: the most guarded secret”] sets out a series of eye and body part [tongue] anomalies by Dr. Steven Greer and specific witnesses at the May 9, 2001 press conference of the Disclosure Project at the National Press Club in Washington, DC.


What is triggering and controlling these anomalous eye and body movements of Citizen Hearing witnesses?

One easy skeptical response is that the reported anomalous eye and body part movements of Citizen Hearing witnesses Messrs. Bassett, Huneeus and Greer are photographic artifacts or medical or nervous conditions that are solely related to the individual in question. Probably a good 35% – 50% of individuals may come to this conclusion after examination of the above evidence in the absence of any further context.

Another 65% – 50% of the individuals who examine the above visual evidence may have their visual and intellectual curiosity piqued as to whether the anomalous eye and body part movements they have just witnessed may be a meaningful and reliable indicator of brain-mind entrainment by manipulatory extraterrestrial races or by advanced military-intelligence mind control nanotechnologies seeking to control human attitudes through control of apparent UFO/ET “opinion leaders” such as Messrs. Bassett, Huneeus, and Greerin in controlled venues such as the Citizen Hearing on Disclosure.

Some of the alternative possibilities that Exopolitical experts who have viewed the above forensic evidence have listed include:

4. Mind control entrainment by a human agency – The anomalous eye and body movements of Messrs. Bassett, Huneeus, and Greer may be the result of remote advanced nano-mind control technology applied by military-intelligence agencies. Under this alternative, the brains, neurological systems, and personalities of Bassett, Huneeus and Greer are entrained by military-intelligence nano-mind control technologies to act out agendas of these agencies that in turn may be cybernetically directed by predatory dimensional extraterrestrials.

5. Covert alteration of above video tapes by Cointelpro unit hacking You Tube - Yet another speculative hypothesis is that each of the anomalous eye and body part movements in the above You Tube samples are the result of covert alteration by a Cointelpro unit that can hack You Tube Videos. The purpose of this hacking would be a disinformational psyops to discredit Messrs. Bassett, Huneeus, and Greer and by extension the UFO and Exopolitics movements.

The following Panel of EU Experts on these nanotechnologies and their applications sets out in detail a scenario of how Messrs. Bassett, Huneeus, and Greer may have become brain-mind entrained to a super grid of super quantum computers operating in a quantum cloud.