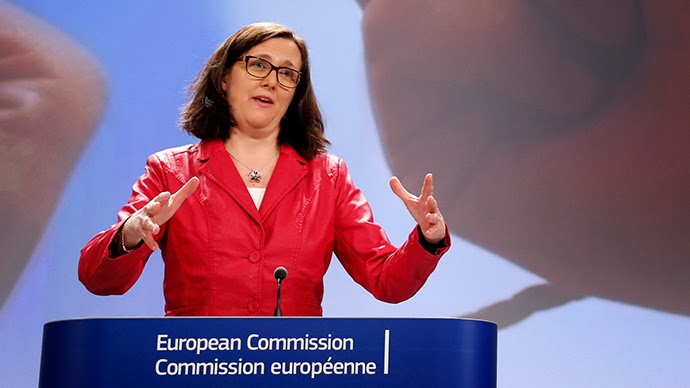 Corruption in the EU costs the economy 120 billion euro per year - equivalent to the EU’s annual budget, EU Home Affairs Commissioner Cecilia Malmstroem said when presenting a new report, adding that “there are no corruption-free zones in Europe.”


The first of its kind report examines all 28 member states and looks into existing measures, problems and successful policies to provide further recommendations.

Just over three quarters of those surveyed for the EU Anti-Corruption Report at the EU level said that they believe corruption is widespread in their own country, with more than half adding that the levels of corruption increased.

In terms of perception of corruption, the top countries included Greece, with 99 percent of respondents stating that corruption is widespread in their country, followed by Italy with 97 percent, and Lithuania, Spain and the Czech Republic all at 95 percent.

The report highlighted Croatia, the Czech Republic, Lithuania, Bulgaria, Romania and Greece as countries behind in their scores of “perceptions and actual experience of corruption.”

“In these countries, between 6 and 29 percent of respondents indicated that they were asked or expected to pay a bribe in the past 12 months, while 84 percent up to 99 percent think that corruption is widespread in their country,” the report said.

By contrast, the lowest levels of corruption witnessed were reported Finland and Denmark, at 3 percent each, followed by Malta and the UK with 4 percent.

In terms of doing business in the EU, more than four out of 10 companies said corruption is a problem for operating in Europe.

Corruption destroys the trust in public institutions and democracy, Malmstroem said during a press-conference. “It undermines our internal market, it hampers foreign investment, it costs taxpayers millions, and in many cases it helps organized crime groups do their dirty work,” she said.

Following the release, the EU Commission will begin a dialogue with all member-states, European Parliament and national parliaments to discuss and work on the report’s recommendations.

In two years the EU is planning a follow-up report to measure progress achieved.

Some of the suggestions listed in the report include: more accountability standards, control mechanisms in public authorities, improve the effectiveness of courts and police, protection for whistleblowers, more transparent lobbying practices, creating e-tools to increase transparency.

“The price of not acting is simply too high,” Malmstroem said in conclusion to her speech, hoping to start a political dialogue within the EU.