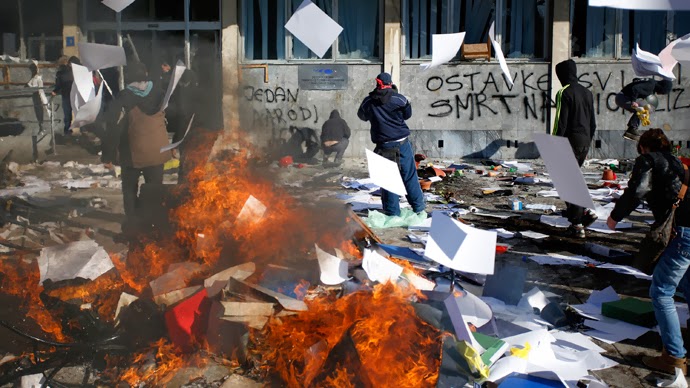 Riots in the cities of Sarajevo, Zenica, Tuzla, Bihac and Mostar resulted in Government buildings burning. Protestors chanting "Revolution!" and "Thieves!". The worst outburst of violence since the regional war ended in 1995.


Special forces soldiers have used a water cannon to drive off protesters trying to storm the presidential residency in Bosnian capital Sarajevo, Reuters reports. Demonstrators had set fire to the building and torched police cars stationed around it.

Several cities in the Balkan state are gripped by dissent after a local unemployment rally grew into a nationwide protest - the worst outburst of violence since the regional war ended in 1995.

Earlier, police launched stun grenades and rubber bullets at angry demonstrators, who had been throwing stones and eggs.

But the most violent clashes are in the northern city of Tuzla, where demonstrators set a government building on fire. Several official were seen escaping from the windows of the burning building. 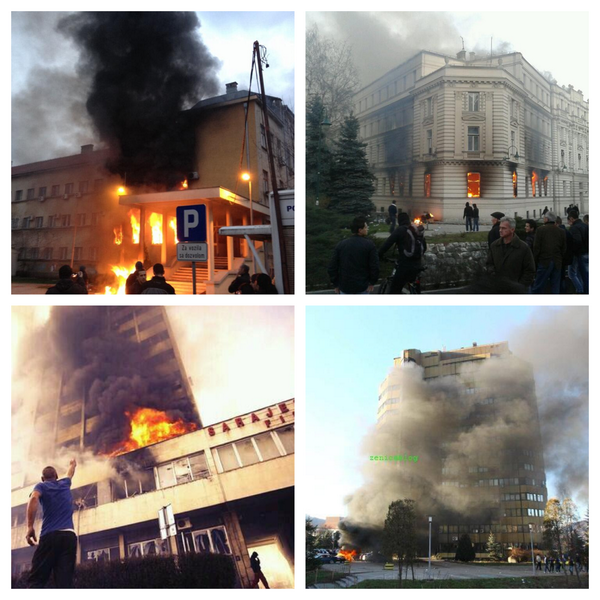 Eyewitnesses report that as many as 6,000 people are on the streets of the city, which has a population of about 80,000.

In the town of Zenica, rioters set fire to another government building, chanting "Revolution!" and "Thieves!".

The demonstrations began on Tuesday, after controversial privatizations of key local industries since 2000 resulted in eventual bankruptcies, leaving much of the working population unemployed. In total 27.5 percent of all Bosnian adults are without a job.

The worst of the protests so far were on Thursday, as 130 people – mostly police – were injured, as rioters began to attack shops and set fire to bins in Tuzla.

Zenica, Bihac and Mostar are some of the other population centers that have witnessed clashes.

As protests have spread, the demands have broadened, with demonstrators asking not just for better economic conditions but for an overhaul of the political system. According to non-profit Transparency International Bosnians experience more corruption than any other Balkan state.

An election is scheduled for October.

Prime Minister Nermin Niksic, who held an emergency government meeting on Thursday, has recognized the validity of the protesters’ complaints, but implored them to refrain from violence.