Forget the Government Shutdown – It’s About Shutting YOU Down 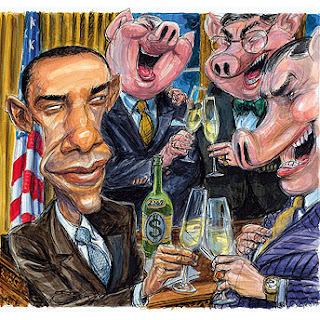 The government is red, the middle class is dead & they want us all dead

Americans are being treated to political theater at its finest. It’s not a theater of entertainment, however, but a coliseum of enslavement where in the world of deception, perception becomes reality. This theater requires audience participation, where we, the theater-goers, become part of the play. We are a truly captive audience, entranced into mindlessly choosing sides at the frenzied urging of the corporate media and partisan cheerleaders firmly seated behind the microphones and television cameras of the nationally syndicated media.

As the play progresses, we, the American people, become part of each act, believing that we actually have a voice in this pre-scripted performance. We are bombarded with lie after lie, each worse than the previous in an attempt to convince us that we can making a difference by choosing and cheering seemingly opposing sides on the stage before us. The biggest lie of them all is that there are not two sides, but just one. It’s “them versus us” in a fight to the death playing out before us in this 21st century Shakespearean tragedy. It’s not just death, but the premeditated murder of the middle class and anyone without a reservation at the globalists’ table. And the space at that table is limited.

The actors of this play are ostensibly at odds over funding the Affordable Care Act while a peek behind the curtain tells a different story altogether. Like any play, the ending of this has already been determined.  The ending, however, is not the same as written in the commemorative program you were given upon your arrival at this theater.

The house lights have been dimmed not just for the performance, but to induce us into a hypnotic trance further enabled by the media mouthpieces of malice. As you gradually become accustomed to the theater lighting, you’ll see that it’s not just a play, but you’re being played. You’re being manipulated into believing that the government shutdown is the actual plot of the play, while it is merely the method to continue the lie of a fictitious political paradigm.

Audience members who remain seated and captivated by the stellar performances of the actors, while maintaining a mental death-grip on the media cheering “their side,” are sadly in the majority. They are yelling at just above a throaty whisper at us and others who see beyond and behind the curtain, telling us to sit down and shut up, as we are reaching a critical moment in the performance.

Meanwhile, the clock is ticking toward the October 17th deadline when we the U.S. will officially run out of money in this scripted, manufactured crisis. As the play builds up to its epilogue of evil, it serves its critical purpose of entertaining the masses and diverting our attention from the real issue, which is the killing of the U.S. dollar. The premeditated murder of the United States Petro-dollar is the real act taking place behind the velvet curtain. The play merely buys the actors, the murderers of the working class and the world as we will have once known it, time to arrange their own exodus from this coliseum turned theater.

The actors. aided by the media of malice, continue to perform brilliantly and are effectively distracting the majority of us through the final curtain call. Then, as the actors take their bows amid thunderous applause by the uninitiated, the majority of the audience will never see “it” coming.

They will not see the stagehands open the cages of the lions while simultaneously closing the doors and blocking the exits. The  thunderous applause at the curtain call will hide the sound of the engines on the Lear jets and the rotor noise on the helicopters that will whisk the actors to safety, away from the unspeakable carnage that was planned from the beginning.

By the time the screams from those who remained dutifully seated become unbearable, the globalist bankers, the money changers, the power brokers pulling the strings of the political puppets, will be far from earshot. When the house lights are turned on, the remaining theatergoers who survived will suddenly awaken to a different life. For it was never about what was seen, but always about what was hidden. It was never about the government shutdown, but the shutdown of the majority. The same majority that continues to cheer for their side, unable or unwilling to comprehend that there is only one side. Their side.

Related:
Obama should be stripped of his Nobel Peace prize if he starts Syria war
Yes We Can: Obama Funding Syrian Rebels Beheading Christians, Using Child Soldiers
Message from Putin to America
Obamah's supported jihadists are killing Christians all over the World
When the banks drive us into poverty, what is the solution?