In a paper in the journal Nature, scientists reported December 4th that they had retrieved ancient human DNA from a fossil dating back about 400,000 years. Why is this amazing?

Firstly because the previous record was of 100,000 years and secondly because the retrieved DNA does not belong to a forerunner of Neanderthals, as previously thought. The fossil, a thigh bone found in Spain, closely resembles the DNA of a cryptic subspecies of Homo Sapiens, known as Denisovans.

Until now, the oldest remnants of Denisovans have been discovered in a cave in Siberia and have been dated to be 41,000 year old. The DNA was retrieved from a finger bone fragment of a juvenile female.


The Amazing Discovery Baffles the Scientists

The fossil was excavated in the 1990s from a deep cave in a well-studied site in northern Spain called Sima de los Huesos (‘pit of bones’). 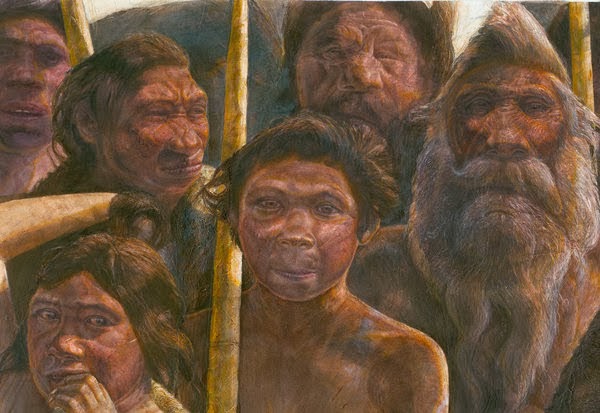 A team of scientists from the Max Planck Institute for Evolutionary Anthropology in Leipzig, Germany, have dated the femur to be 400,000 year old and placed the DNA closer to Denisovands than to Neanderthals.

Svante Pääbo, a molecular geneticist and the team's leading expert said:
"This really raises more questions than it answers."

Based on the anatomy of the fossils, Dr. Arsuaga has argued that they belonged to ancestors of Neanderthals, which lived in western Asia and Europe from about 200,000 to 30,000 years ago. When Dr. Meyer and his colleagues drilled into the femur, they found ancient human DNA inside, just as they had hoped. “Our expectation was that it would be a very early Neanderthal,” Dr. Meyer said.

But the DNA did not match that of Neanderthals. Dr. Meyer then compared it to the DNA of the Denisovans, the ancient human lineage that he and his colleagues had discovered in Siberia in 2010. He was shocked to find that it was similar. “Everybody had a hard time believing it at first,” Dr. Meyer said. “So we generated more and more data to nail it down.”

The extra research confirmed that the DNA belonged on the Denisovan branch of the human family tree. The new finding is hard to reconcile with the picture of human evolution that has been emerging based on fossils and ancient DNA. Denisovans were believed to be limited to East Asia, and they were not thought to look so Neanderthal-like. “Now we have to rethink the whole story,” Dr. Arsuaga said. (...)

The mismatch between the anatomical and genetic evidence surprised the scientists, who are now rethinking human evolution over the past few hundred thousand years. It is possible, for example, that there are many extinct human populations that scientists have yet to discover. “Right now, we’ve basically generated a big question mark,” said Matthias Meyer, a geneticist at the Max Planck Institute for Evolutionary Anthropology in Leipzig, Germany, and a co-author of the new study. Dr. Beth Shapiro, an expert on ancient DNA at the University of California, Santa Cruz, favors an even more radical possibility: that the humans of Sima de los Huesos belong to yet another branch of humans.

“The more we learn from the DNA extracted from these fossils, the more complicated the story becomes,” Dr. Shapiro said. Dr. Meyer is hopeful that he and his colleagues will be able to get more DNA from the Spanish fossil, as well as other fossils from the site, to help solve the puzzle they have now stumbled across. “It’s extremely hard to make sense of,” Dr. Meyer said. “We still are a bit lost here.” - Carl Zimmer, wrote for NY Times.


Why is Our Ancient History Constantly Changing?


The problem with puzzling the ancient human history is that the scientists only retrieve bits and pieces over the long course of the years, plus the technology advances only so fast. But the most crucial problem, in my opinion, is preconditioning: all new discoveries are required to fit an already existing pattern, based solely on the Darwinistic Evolution. (Charles Darwin was a Freemason, just as his grandfather, Erasmus Darwin. Charles was used to promote his grandfather's theory of evolution, which was published long before he was even born, in 1794.

The highest ranking Freemasons have always been involved in suppressing the true knowledge and altering our history. The truth would shatter their carefully consolidated power). And each time new discoveries do not fit this pattern, the scientists need to "rethink the whole story," as Dr. Arsuaga asserted. So, you see, our ancient
history is a slowly uncovered story, and each time a new major discovery is unveiled, the story changes - because it does not fit with the old one - though it still required to sticks to "the pattern".

Unfortunately, the pattern does not include the possibility (based on my research, a probability) of an outside, extraterrestrial, intervention in our evolution. Not only that there is enough evidence (historical: "Forbidden History Articles" and genetic: "Latest DNA Tests Prove That the Starchild Skull is Alien") to consider the possibility of an outside intervention, but there is also evidence of advanced humans/humanoids present on Earth millions of years ago.