Police In Thailand Lay Down Vests 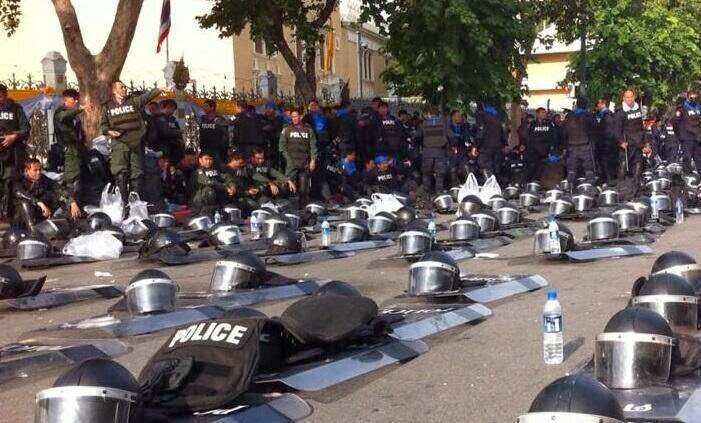 In a stunning turn of events today in Thailand, riot police yielded to the peaceful protesters they were ordered to harass and block.


The police removed barricades and their helmets as a sign of solidarity.

The protesters explain that their goal is to destroy the political machine of former  Prime Minister Thaksin Shinawatra, who is accused of widespread corruption and abuse of power. Thaksin’s sister, Prime Minister Yingluck Shinawatra, is currently in power, and is seen as a puppet of her brother.

Suthep Thaugsuban, the leader of the widespread protests that have been going on in Thailand, told his supporters to storm the Bangkok Metropolitan Police Bureau. This was one of the primary buildings they vowed to take over in their vow to topple the Shinawatra government.

Protesters occupied Government buildings last weeks in a peacefull manner. Meaning: no violence to others or destroying any property.

The move by police has surprised many, and marks a turning point in the protests and a potential shift in power.

Watch the video below, and let us know what you think: could something like this even happen in the West? In the United States?

War on Democracy: Spain and Japan Move to Criminalize Protests

As might be expected as political and economic policy failures pile up and citizens become increasingly mad, the status quo is becoming increasingly authoritarian (recall blogger “Mish” was just fined 8,000 euros for a blog post).

In the latest disturbing news from a desperate power structure, the conservative government in Spain has passed an Orwellian bill titled the Citizens’ Security Law, which allows for fines of up to 600,000 euros ($816,000) for “unauthorized” street protests, and a 30,000 fine for merely having signs with “offensive” slogans against Spain or for wearing a mask.

This law is a perfect example of the increasing neo-feudalism being implemented across the globe by a corrupt, decadent and depraved status quo. Such laws must be immediately resisted or they will only get worse, much worse. It is quite obvious what the power structure in Spain in trying to do. It is putting into place an egregious punishment framework that could bankrupt a person by merely protesting. Such a threat is intended to make people not even consider their rights as human beings to express grievances to a crony government.

Instead of eye for an eye, it is like 25 eyes and a limb for an eye. If this does’t tell the Spanish people all they need to know about their government I don’t know what will. Below are some excerpts from a Reuters story covering the law:

(Reuters) – Spain’s conservative government agreed on Friday to toughen penalties for unauthorized street protests up to a possible 600,000 euro ($816,000) fine, a crackdown that belies the peaceful record of the anti-austerity protests of recent years.
>>read more>>