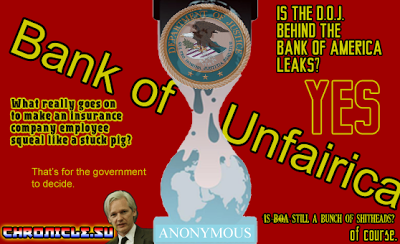 Anonymous has released 14 gigabytes of information allegedly implicating Bank of America and others in a massive spying operation.

Hacktivists claim the data dump reveals that Bank of America (BofA) hired at least one web intelligence firm to spy on hackers, social activists and many other private citizens.

A statement issued Feb. 27 claims the release of data, code and software “shows that Bank of America and others are contracting other companies to spy and collect information on private citizens.” The statement goes on to report that “the overall quality of the research is poor and potentially false.”

The statement indicates the data dump contains detailed information about “thousands of executives and employees from various corporations around the world, including salary information.”

Included in the data dump is “320 mb of internal reports and emails assembled for Bank of America by a sub-contractor named TEKSystems. These reports and emails assembled ‘intelligence’ from sources like public channels on Anonymous and other IRC networks like Anonops, Voxanon and Cryto, as well as other social media,” according to par-anoia.net (aka Anonymous Intelligence Agency).

Hacktivists claim the release was not a hack “because it (14 gigabytes of data and code) was stored on a misconfigured server and basically open for grabs;” and, “the collected data was stored insecurely and could have been retrieved by anyone.”

Email ThisBlogThis!Share to TwitterShare to FacebookShare to Pinterest
Labels: Anonymous, Bank of America