Hundreds of UK drones 'missing' in Iraq and Afghanistan. 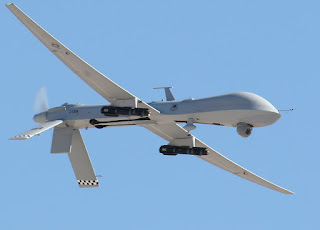 Britain has lost 447 of its military drones in Iraq and Afghanistan. The aircraft have crashed, broken down or gone missing during operations, adding to international outrage over civilian deaths and debate over the safety of their use in Britain.

The UK’s Ministry of Defence (MOD) has reported that the loss of 447 unmanned drones was due to technical faults, controller error or not wanting to remove them from volatile enemy areas, according to the Guardian newspaper.
Small handheld devices, large UAVs, and a missile-carrying drone were all lost in the last five years.

Many have not been replaced and are lost for good, costing the UK millions. An MOD official stated that no deaths or injuries have resulted from the drone losses. However, the smaller drones which are more liable to crashing are similar to those which may be introduced into UK airspace, prompting safety concerns alongside existing fears of privacy violations.
The contentious issue of continued drone usage by Western forces sparked an outcry from a UK watchdog. “The drone industry constantly talks up the supposed economic benefits of unmanned drones, but it is the civil liberties and safety implications that need real attention,” Chris Cole, founder of watchdog website Drone Wars UK told the Guardian.

The overall number of civilian deaths caused by drone strikes abroad has been difficult to confirm. However, estimates by the Bureau of Investigative Journalism reported 2,562 to 3,325 deaths from drone strikes in Pakistan, including 474 to 881 civilian deaths.
Drone strikes were responsible for the deaths of 531 to 779 people, with a civilian casualty rate between 4 percent and 8.5 percent as of June 2012, according to a report by the New America Foundation. Both statistics were laid out in a 2012 report by the Human Rights Clinic at Columbia Law School and the Center for Civilians in Conflict.

The impact of strikes in other aspects of civilian life has been severe, harming not only the individual, but their families, friends and neighbors. “Covert drone strikes cause other kinds of harm to civilians and local communities,” the report said.  Militant groups can pursue retaliatory attacks against those they suspect of being informants, a kind of harm not always reported on by the press.

In January of this year, the UN began an investigation into US and UK drone attacks, the resulting civilian casualties and the drone program's legal implications. The UN will examine the use of UAVs in Afghanistan, Pakistan, Yemen and Somalia, and will publish its findings next autumn.

UN special Rapporteur Ben Emmerson told the Guardian newspaper in January that “one of the questions we will be looking at is whether, given the local demography, aerial attacks carry too high a risk of a disproportionate number of civilian casualties.”

UK plans to open its airspace to unmanned surveillance vehicles has been met with great resistance, and fears of an ‘eye in the sky’ have been rampant in British media. By August 2012, the UK's airspace regulator, the Civil Aviation Authority (CAA), had already handed out 120 permits for the smaller drone models.
“According to our analysis, there have been more than 100 crashes of the larger class of military unmanned aerial vehicles in over 20 countries since 2007,” Cole told the Guardian. “However, it is likely that it is the smaller class of drones – less than 150kg – that will be used most often in civil airspace and the revelation that over 400 British drones of this type have crashed in Afghanistan is startling.”