Over 4000 homeowners file damagereports due to earthquakes in The Netherlands 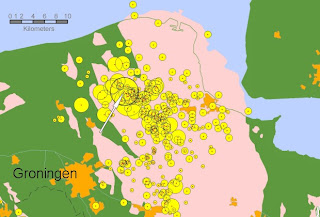 Holland is mostly known for it's tulips, wooden shoes, redlightdistricts & legal marijuana but not so much for earthquakes due to gasproduction.


The Dutch Petroleum Company (NAM) has received last weeks in total around 4200 damage reports from home owners in response to the many earthquakes in Groningen ,North of The Netherlands recently. Over six hundred of them have been completed, let the NAM know friday 14th februari 2013.

The NAM has made 2170 visiting appointments so far with appraisers , more than nine hundred damagedetectors/homeowners have already received a valuation. To the large number of reports NAM uses extra additional appraisers.

Many people are worried about the increasing number & severity of the earthquakes. Investigations revealed earlier this month that the earthquakes caused by gas production will be stronger in the future than previously thought.

Secretary of Economic Affairs Henk Kamp (VVD) announced yet not wanting to limit the gasproduction.

Last months the NAM and Dutch Government announced they will increase the number of drilling locations in the North-East of The Netherlands & on the Northsea near the coast.