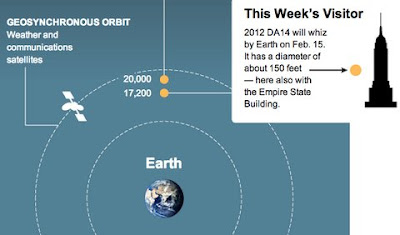 Amid all the progress on this planet — declining losses from terrible diseases and war, rising literacy and the rest — there remain plenty of planet-scale risks requiring serious focus, from pandemic flu to centuries of locked-in climate change to, yes, collisions with space rocks.

This week provides another reminder of the reality of that threat, not that Earth’s history doesn’t already provide plenty of warnings. Bill Marsh, an illustrator at The Times, created the illuminating chart above (the image is a detail; click for the full graphic) to show just how close the asteroid known as 2012 DA14 will come on 15 februari 2013. It will pass not only far inside the orbit of the Moon, but even closer than the 22,300-mile distance where geosynchronous satellites orbit.

I was fortunate to participate in a 2010 workshop assessing what kinds of protocols should be developed to coordinate international responses when astronomers finally identify an object that will hit Earth. A report from that meeting, “Responding to the Threat of Potentially-Hazardous Near Earth Objects,” provides a primer on both the risk and possible responses. Here’s the introduction:

The record of history, as written in the many impact craters on Earth and the moon, demonstrate that it is just a matter of time before astronomers discover a near Earth object (NEO) headed toward a collision with Earth. As the 1908 Tunguska event, which leveled trees across an area of Siberia some 30 km in diameter demonstrated, even relatively small objects (30-50 m diameter) are capable of inflicting enormous damage. When such an event is imminent, how should we respond? Who should respond?
I encourage you to explore the group’s proposals for answering those questions.

To track this asteroid and related issues, there’s no better starting point than the @Asteroidwatch Twitter feed from NASA’s Jet Propulsion Laboratory, which has close to a million followers and demonstrates how 140 characters can matter.

In a ranking of near-term “fatal discontinuities” in his 2008 book, “Global Catastrophes and Trends: The Next Fifty Years", Vaclav Smil puts asteroid collisions far below the persistent risk of large-scale war (particularly because so many nuclear weapons are still arrayed around the world), great earthquakes and tsunamis and pandemics, but above global warming (because of its gradual slope). (Here are reviews by Martin Lewis and Michael Shellenberger.)

On longer time scales, of course, the inevitability of discovering an asteroid on a collision course is clear — which makes figuring out strategies for dealing with that eventuality not simply fodder for screenwriters and novelists.

There’s plenty more on “Close Encounters of the Rocky Kind” on Dot Earth.