A Shift In Human Behavior 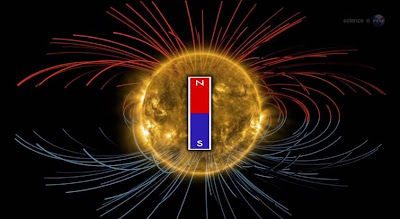 The sun is a major source of visible light and energy on this planet. It represents all-pervading consciousness which animates all things providing us with what some believe to be unlimited energy.


According to measurements from NASA-supported observatories, the sun’s vast magnetic field is about to flip. What are the cosmic and personal implications of this? It is not such a unique phenomenon, as it happens every eleven years. Still, every eleven years, shifts in human consciousness around this period seem to occur like clock work.

It happens at the peak of each solar cycle as the sun’s inner magnetic dynamo re-organizes itself. The coming reversal will mark the midpoint of Solar Cycle 24. Half of ‘Solar Max’ will be behind us, with half yet to come.

“It looks like we’re no more than 3 to 4 months away from a complete field reversal,” says solar physicist Todd Hoeksema of Stanford University. “This change will have ripple effects throughout the solar system.”

Hoeksema is the director of Stanford’s Wilcox Solar Observatory, one of the few observatories in the world that monitor the sun’s polar magnetic fields. The poles are a herald of change. Just as Earth scientists watch our planet’s polar regions for signs of climate change, solar physicists do the same thing for the sun. Magnetograms at Wilcox have been tracking the sun’s polar magnetism since 1976, and they have recorded three grand reversals–with a fourth in the offing.

A reversal of the sun’s magnetic field is, literally, a big event. The domain of the sun’s magnetic influence (also known as the “heliosphere”) extends billions of kilometers beyond Pluto. Changes to the field’s polarity ripple all the way out to the Voyager probes, on the doorstep of interstellar space.

The sun recently unleashed three X-class solar flares which were the strongest flares of the year so far. They signaled a significant increase in solar storms now supported by continued activity.

By these comparisons he constructed an “Index of Mass Human Excitability” covering each year from 500 B.C. to 1922 A.D. He investigated the histories of 72 countries in that period, noting signs of human unrest such as wars, revolutions, riots, expeditions and migrations, plus the number of humans involved. Tchijevsky found that fully 80% of the most significant events occurred during the years of maximum sunspot activity. He maintained that the “exciting” period may be explained by an acute change in the nervous and psychic character of humanity, which takes place at sunspot maxima.

Tchijevsky discovered that the solar minimum is the lag period when repression is tolerated by the masses, as if they lacked the vital energy to make the needed changes. He found that during the sunspot maximum, the movement of humans is also at its peak. Tchijevsky’s study is the foundation of sunspot theory on human behavior, and as Harlan True Stetson, in his book Sunspots and Their Effects, stated, “Until, however, someone can arrive at a more convincing excitability quotient for mass movements than professor Tchijevsky appears yet to have done, scientists will be reluctant to subscribe to all the conclusions which he sets forth.” Stetson did acknowledge that the mechanism by which ultraviolet radiation is absorbed was still a puzzle biologists had to solve.

Many animals can sense the Earth’s magnetic field, so why not people, asks Oleg Shumilov of the Institute of North Industrial Ecology Problems in Russia.

Shumilov looked at activity in the Earth’s geomagnetic field from 1948 to 1997 and found that it grouped into three seasonal peaks every year: one from March to May, another in July and the last in October.

Surprisingly, he also found that the geomagnetism peaks matched up with peaks in the number of suicides in the northern Russian city of Kirovsk over the same period.

Shumilov acknowledges that a correlation like this does not necessarily mean there is a causal link, but he points out that there have been several other studies suggesting a link between human health and geomagnetism.

For example, a 2006 review of research on cardiovascular health and disturbances in the geomagnetic field in the journal Surveys in Geophysics (DOI: 10.1007/s10712-006-9010-7) concluded that a link was possible and that the effects seemed to be more pronounced at high latitudes.

The review’s author, Michael Rycroft, formerly head of the European Geosciences Society, says that geomagnetic health problems affect 10 to 15% of the population.

“Others have found similar things [to Shumilov's results] in independent sets of data,” says Rycroft. “It suggests something may be linking the two factors.”

A 2006 Australian study, for example, also found a correlation between peaks in suicide numbers and geomagnetic activity (Bioelectromagnetics, vol. 27 p 155).

Psychiatrists too have noticed a correlation between geomagnetic activity and suicide rates. A review of 13 years of South African data on suicides and magnetic storms in South African Psychiatry Review, vol. 6 p. 24) suggested a link.

In 1994, a study was published suggesting a 36.2% increase in the number of men admitted into hospital for depression in the second week after geomagnetic storms (British Journal of Psychiatry vol 164, p 403).

What may be the cause of the link, if there is one, remains unknown. “The intriguing correlation between geomagnetism and suicide justifies more research into its mechanism,” says Rycroft.

“The most plausible explanation for the association between geomagnetic activity and depression and suicide is that geomagnetic storms can desynchronise circadian rhythms and melatonin production,” says Kelly Posner, a psychiatrist at Columbia University in the US.


However, Shumilov, who was presenting his data at the European Geoscience Union (EGU) annual meeting in Vienna, Austria, last week, does not believe geomagnetic activity influences everyone equally.

He also presented hospital data from 6000 pregnant women who had routine scans of their fetus’s heart rates between 1995 and 2003. In 15% of the fetuses, periods of disturbances in their heart rates coincided with periods of high geomagnetic activity.

Shumilov accepts that light levels in northern countries can influence depression, but believes that geomagnetism may be another factor, and one that is under-appreciated.

"The trouble with studying the causes of suicide is that it is a rare condition," says Klaus Ebmeier, a psychiatrist at the University of Oxford. “You are bound to get spurious effects. A study of the causes would have to enrol a country’s entire population.”

Cosmo Hallstrom, a member of the Royal College of Psychiatrists, agrees. “You have to be very careful with suicide statistics,” he says. “Countries report them differently. Catholic countries are very reluctant to diagnose suicide. Scandinavian countries consider it a social injustice not to.”

While the mechanism behind the stimulation of human behavior is still a mystery, many are now accepting that humanity is receiving the highest support from the consciousness of the cosmos, allowing us to wake up to our magnificence and divine connection to each other and the universe. The Sun is only assisting in this inevitable process.

It will be traumatic for many when those revelations of why human consciousness if shifting at the same time major changes are being introduced. Knowing that all of the confusion and turmoil is heralding Earth’s exit from third density, how will we be prepared to weather the coming months and to help those who are foundering.

The interesting fact about this energy is that since it is of a higher frequency it creates the power of instant manifestation of our thoughts, which means whatever we think, we create instantly. This never before happened in our lifetime and that is why many people are writing books on the subject on the Power of Attraction.

Photonic energy connects to our thoughts so it is important that we know what we want, rather than we don’t want, otherwise, we will manifest more of what we don’t want. If you are in the process of change and transformation this energy works well for you. On the other hand, if you are stuck in the past through victimization and anger, you will simply manifest more reasons to remain stuck in victimization until you are ready to release it.

There is some Russian research that shows an increase in cardiac problems during sunspot maxima. The solar activity probably sets off a preexisting condition and no one is suggesting that people will drop dead in the streets. We could see the stress of solar activity on the biology of living things as an evolutionary agent weeding out the old and sick and strengthening those who can resonate with its radiations.

There will also be an increased frequency of deaths worldwide following the solar maxima. These may take place through accidents, illness and other factors which will be attributed to chance, however most of these deaths will be related to an acceleration of consciousness and self-imposed termination for those not willing or ready to experience a fourth dimensional experience.

Professor d’Arsonval gives several examples of research done in the last hundred years that shows the most malefic effects from solar activity come at the sunspot minima. He notes from the British Medical Journal, March 7th & 14th of 1936 that both Colonel C.A. Gill and Dr. Conyers Morrel found increases in pandemics of deadly diseases during the period of minimal sunspot activity.

In Gill’s study he showed that every pandemic of malaria since sunspot records were taken had occurred when sunspot numbers were lowest. Similar trends were observed in East Africa and elsewhere with Yellow fever epidemics since 1800 occur during the sunspot minima. Dr. Conyers Morrel also finds that, “…waves of epidemic diseases covering considerable periods exhibit a very close correspondence with the phases of sunspot periods. Diphtheria, Typhus, and Dysentery seemed to prosper when there was an absence of solar activity. We also see an increase in disease in Solco W. Tromp’s study. Without the stimulation from the Sun human health seems to diminish. The immune system seems to grow unresponsive during the solar lull and diseases can more easily gain a foothold in the body.

Not only human health but Life itself seems hampered by the lack of solar activity. William Hershel wrote in 1801, “It seems probable analyzing the period between 1650 and 1713, and judging by the normal yields of wheat, that a scarcity of vegetation occurred whenever the sun appeared to be free from spots.” The depressed state of metabolism and lack of food in agricultural centers may have seemed very inviting to the Mongols. Goncharov, in an abstract on the “Asian Nomadic Invasions and Solar Cycles”, aid, “From the 4th to the 16th centuries the Central Asian Steepe was the cradle of the series of great nomadic tribal invasions into agricultural regions of Europe, China, and South Asia. Those invasions had similar features. They arose in middle latitudes and recurred every 160-220 years — exactly after solar abatements.”

What we will be experiencing in 2013 and 2014 more than anything else is a constant upgrade to our current belief systems, collective consciousness and awareness of earth’s true history from the constant bombardment of solar activity.

There will be no more major wars but a shift with no central ideology. This ideology will grow and spread worldwide with no exception. The shared understanding is arising from different economic sectors, cultures and regions. Our economic landscape will change, and although a planned one-world currency will be enacted, we will quickly dismiss this new system within a short period of time and move toward non-monetary systems.

All these information packets from the Sun will make us feel like we need to find a new center of truth. As galactic connections increase around the 2012 summer solstice and then again for the universal collective around the 2012 winter solstice, we must all listen intently to our intuition and trust it. If it doesn’t feel right, switch over to something that does. It’s that simple.