Coming soon to a restaurant near you: Lab-grown synthetic hamburgers 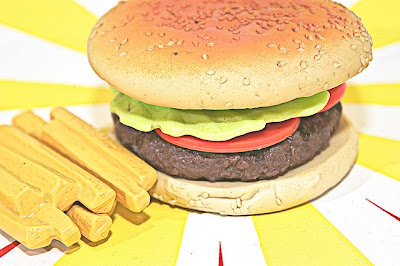 Synthetic hamburgers are the latest processed food atrocity to emerge from the serpentine laboratory dungeons of modern science, according to a new report by FoodNavigator.com.


Food scientists from Maastricht University in the Netherlands will very soon be unveiling a laboratory-grown hamburger made from fake meat and fat that they hope will be a prototype for an eventual commercial release of this culinary abomination.

Back in 2011, Professor Mark Post and his colleagues first spoke to the media about the lab-grown meat concept, which they claim may help eventually meet the dietary needs of a growing global population. Derived from stem cells extracted from actual cattle, Prof. Post's fake meat is grown in vitro, which means it is generated in a petri dish. The resulting tissue is later mixed with lab-grown fat and, voila, you have a man-made burger.

"Our goal is to build one burger in the coming year," explained Prof. Post back in 2011 to FoodNavigator.com. "It's going to cost 250,000 Euros (about $335,000), so it's a very expensive burger ... but hopefully this will create enough enthusiasm and financial support to upscale and economize the processes, so that we can improve and start to think about a real manufacturing process."

Two years later and this goal is finally coming to fruition, as Prof. Post and his colleagues are set to present their man-made meat creation at an exclusive, invite-only west London event in the coming week. Guests will not only have the opportunity to get a first look at the synthetic meat, but they will also be allowed to taste it as part of a momentum-building promotional endeavor.

"Eventually, my vision is that you have a limited herd of donor animals which you keep in stock in the world," explained Prof. Post to reporters recently. "You basically kill animals and take all the stem cells from them, so you would still need animals for this technology."
read more