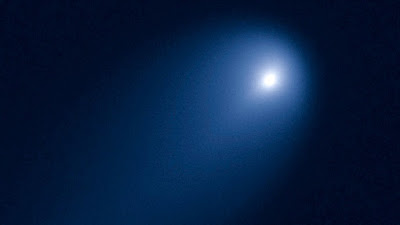 Astronomers have discovered a ‘comet graveyard’ within the Solar system’s asteroid belt, consisting of ‘Lazarus comets’ that could jump back to life after having been inactive for millions of years.


The ‘enormous graveyard of ancient dormant and extinct rocky comets’ was discovered in the asteroid belt between Mars and Jupiter, according to researchers from the University of Antioquia in Colombia.

Meanwhile, comets are traditionally thought to come from two much further locations – the Kuiper Belt and the Oort Cloud, trans-Neptunian objects that lie at extreme distances from the Sun.

In the last decade twelve active comets have been discovered in the asteroid main belt region, but scientists have managed to describe their origin for the first time.

The researchers believe the asteroid belt could have once held thousands of active comets but over time these comets lost energy and became dormant.

"These objects are the 'Lazarus comets', returning to life after being dormant for thousands or even millions of years. Potentially any one of the many thousands of their quiet neighbors could do the same thing," said the leading astronomer of the study Professor Ignacio Ferrin.

The astronomers named the celestial bodies ‘Lazarus comets’ referring to the biblical figure Lazarus who was resurrected by Jesus Christ several days after his death.

These comets may represent a long-lost population of the icy chunks of rocks, thought to have started out near the fringes of the planetary system, said the astronomers.

'Lazarus comets' can come back to life when they pass relatively close to Jupiter, the biggest planet of the Solar System, and  the shape of their orbits is tugged by Jupiter’s gravity, bringing them closer to the sun, increasing the temperature, according to the study published in the Monthly Notices of the Royal Astronomical Society. read more