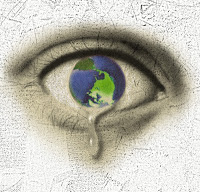 Open letter to the citizens of the world about our war-mongering government.

As the U.S. government fabricates its way into yet another aggressive war, this time in Syria, I understand why you might resent average Americans because we allow this war path to continue.

After Gaddafi's carcass was dragged through the streets of Libya, our Secretary of State told you with a demonic smirk "We came. We saw. He died." I get it, they make us look like bloodthirsty thugs.

You might think we all agree with endless wars and unlawful drone strikes. You might think we condone the indefinite detention or torture of other humans. You may think we approve of the global police state and spy grid paid for by our tax dollars. You may believe we support our government's hubris bravado to conquer the world. You may even hate us for it.

Despite what you're told on the two-way telescreen, we are not okay with what our government is doing.  Our government has gone completely rogue. They don't represent us. We do not share its enthusiasm for blood. We're disgusted by it.

Like you, we just want a peaceful and fruitful life with the hope of a better future for our children. We want joy, peace, love, and the liberty to fulfill of our dreams. Obviously, our government doesn't represent these values because we are not in charge of our government. It's in charge of us.

Our representatives stopped representing our wishes long ago. They've gone to the highest bidder, which happens to be the military-industrial complex and their international financiers. Their thirst for blood is too strong for our political system to peacefully stop it. They operate in the dark and are unaccountable to us.

We're being told that our President is meeting with his war team to weigh an attack against Syria, another sovereign state who's never harmed or even threatened to harm Americans -- like the rest of its recent victims.

Although Americans have been duped into supporting such efforts in the past, the argument that our military is defending our freedom "over there" has been exhausted. "Over there" never posed a threat to our freedom. Our freedom was destroyed by the very same people selling us this lie. We know this now.

Similarly, the "humanitarian" excuse has also been exhausted.  No one could sanely argue that "humanity" is better off within the borders of Afghanistan, Iraq, Libya, Pakistan, and others due to our military intervention.

Consequently, most Americans are vehemently opposed to this or any escalation of the perpetual war on terror. We do not want more war in the Middle East or anywhere else. The American people want peace.

This Associated Press story announcing Obama's Syrian war cabal has zero comments in support of military intervention. Not a single one. Instead, the comments weave a tale of cynicism, conspiracy, and corruption. It shows Americans are rapidly waking up.

We know the "war on terror" is being used as the excuse to create a global prison where a small cabal controls the resources, the corporations, the money, the governments, the press, the Internet, and the people. We know they openly fund and arm the very terrorists that they use to justify this entire scheme. And we know they don't give a crap about America anymore than they care about your nation.

A Reuters poll released today said only 25% of Americans would support military intervention in Syria if, and only if, it was proven that Assad used chemical weapons -- which is clearly still up for debate.

There is virtually no support for this war.  If it happens, please know that it is not the will of the American people.

We stand with you - our human brothers and sisters - for peace, liberty, and justice against this global threat.

In solidarity and with love.