12,000 Peaceful People Arrested in Italy for Not Paying Taxes 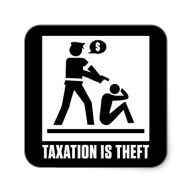 Thanks to a lifetime of propaganda, people will argue relentlessly that taxation is not an act of violence, they will deny that it perpetuates a complicated form of slavery, and many times get deeply offended when you point out the fact that it is theft.

Yet, peaceful people are taken against their will and thrown in cages every day for not paying taxes.  If this action was not carried by the state, everyone would recognize it as a violent kidnapping.
This year in Italy alone around 12,000 people had armed government workers trespass on their property, take them against their will and lock them up in a cage.

If any of these people made any attempts to defend themselves on their own property as they would against any other intruder, they would have been killed and treated as if they were the aggressor.
According to the AFP:
“Italy’s financial police said Thursday they had busted close to 12,000 people last year for evading over 56 billion euros ($74 billion) worth of taxes.  Investigators rooted out 8,617 people who had never paid taxes and owed the Italian tax man a total of 22.7 billion euros, the financial police said in a statement.

Police also honed in on those using fake companies in tax havens to evade paying their dues, calculating 17.1 billion euros in Italian taxes were owed. Some 16.3 billion euros in “other forms of evasion” brought the total to 56.1 billion euros and police reported 11,769 people last year on suspicion of dodging tax.

The crack down on tax evaders in Italy intensified when Prime Minister Mario Monti came to power at the end of 2011, as the government attempted to reduce the country’s deficit and debt.
The financial police also uncovered over 16,000 people working on the black market, the statement said.”

The fact that there are so many people working in the so-called black and gray markets is the silver lining in this story, and it is something that is going to be impossible for the establishment to stop.
The black market is an undying expression of human freedom, and while you may be able to threaten people and lock them up, you can never stop them from trading the resources that they want or need.
The police chief made one of the most twisted, Orwellian comments i have ever heard when asked about the arrests and the booming black market:
“We are continuing to act to recover resources stolen from the state,” said police chief Saverio Capolupo.

Seriously?!  I cant believe that these people can make these kinds of comments with a straight face, and its even worse that the mainstream media can report this without anyone noticing the shear hypocrisy of the statement.
This is the equivalent of a mugger calling its victim a thief because there was money hidden in his sock.

Thousands of peaceful people who did not commit any real crimes were thrown in cages for keeping their own property, this truly is an insane world that we live in.
Taxation is theft. Taxation is Force.  Just ask these 12,000 people in Italy.