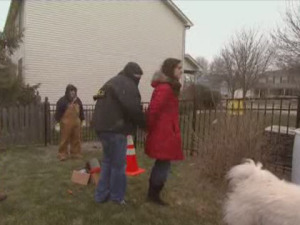 ﻿
Naperville resident Jenn Stahl is arrested after trying to block the installation of a new “smart meter” at her home.
Two Naperville mothers were arrested Wednesday, after they tried to block utility workers from installing new “smart meters.”
CBS 2’s Dana Kozlov reports one of those women was released from custody late Wednesday afternoon, the other was still in custody, but should be released soon.
Their arrests were the culmination of a two-year battle against “smart meter” installation in Naperville.

At Jenn Stahl’s home in Naperville, officers were forced to cut open a lock on her back gate to allow crews to get in to access her meter, when she refused to open the gate herself.
“It’s new technology. It’s city property. The city’s allowed to upgrade their technology, upgrade their equipment, and that’s what the city’s doing,” an officer explained to Stahl.
The officer said Stahl’s proper recourse was to take her case to the courts, or to file a complaint with the city. He said the utility workers were just following directions to replace old meters with new “smart meters.”
“But it’s more than what I consent to do. And I’m fully aware of what the new functions of the meter do, and I don’t consent to that,” Stahl said.
“No matter where you move, no matter what jurisdiction you move into, you agree to all that stuff. If you’re in the city of Chicago, or the city of Elgin, or wherever you’re at – the city of Naperville – that’s city property,” the officer said. “The law allows it.”
“That doesn’t make it right,” Stahl said before officers cut the lock on her gate and utility crews went in to install a new “smart meter.”
When Stahl stood in front of her old meter to block the crews, she was arrested for interfering with a police officer. After officers slapped the cuffs on her, she said, “This is supposed to be America, and people are supposed to have the right to protect their property.”
Several hundred Naperville residents oppose the wireless “smart meters,” citing concerns about possible health problems that might be caused by the meters’ wireless signal, which is always on. They have said studies show the RF signal could be dangerous, when combined with other RF frequencies already in existence.
They have been battling Naperville authorities over the issue since 2011.

At other homes, Naperville utility workers hopped fences onto private property to install the meters over homeowners’ objections.
Kim Bendis filmed utility workers at her home as she told them to leave, but they started replacing her meter anyway
“Get off my property right now,” she said. When a worker began cutting open a locking device over the meter, Bendis started shouting.
“No. No. Get off,” she said. “You are not allowed on my property. Get off my property right now.”
Hours later, she was arrested while shooting video of police officers outside Stahl’s house.
When officers told her to stop her audio recording of them, she refused, and she was arrested.
“We are trying to protect our property. We are trying to advocate for residents who are trying to say no to a product that is being debated all around the country,” Kim Bendis said before her arrest. “The only recourse we have is to document on film.”
Naperville City Manager Doug Krieger said the city is within its legal rights to install the “smart meters” on private property, replacing old meters which are also their property. Krieger also said the meters are safe.
Krieger said Stahl and Bendis deserved to be arrested if they violated the law, but it was not immediately clear what charges the women faced.
Opponents of the “smart meters” also have cited security concerns, because the meters are capable of tracking exactly when a customer is using electricity, and opponents fear it would allow strangers to know when they are home, or gone at work. Some fear hackers could access that information.
He said the city intends to finish installing the “smart meters” this month, and denied accusations from opponents of the new meters that the city is bullying them.
“We absolutely are not bullies. I believe we’ve bent over backwards to accommodate them,” Krieger said.
Krieger said homeowners who object to the “smart meters” have been given the option to receive non-wireless versions, but many said they still don’t trust the security of those devices.
There’s a pending federal lawsuit against Naperville about the meters, as well. Homeowners who are part of the suit said Naperville officials shouldn’t proceed with “smart meter” installations while the case is pending.
Krieger, however, said the meters are funded in part through an $11 million federal grant, that requires them to complete the installation. He said the lawsuit could drag on for years, “and we don’t have that much time.”
Coast To Coast AM hosted by George Noory 24-01-2013 about the arrests & more...
Dana Kozlov﻿
﻿
﻿
Geplaatst door Boddhi op Saturday, January 26, 2013