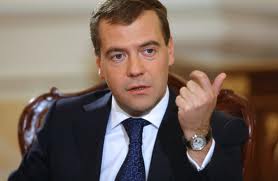 Russian Premier Dimitri Medvedev has admitted in an interview on 8 december 2012 the following details:

- ET's are real
- They are here...
and
- Every new elected Russian President receives the suitcaste with nucleaïr-missile launchcodes of course  ànd............       a detailed   |Top Secret|  file with instructions from the Russian Secret Service about how  to handle the ET presence and with detailed intell about the MIB's [men in black] ultrasecret agency that is trying to control & contact the aliens.
- A question from the reporter how many aliens are here present at the moment Medvedev won't answer that because the answer would cause massive panic...


The Russian language with the English subs are verified by me and corrrect.  - He also referred to a Russian documentary [not that movie from Hollywood] called Men in black:


It's very unlikely that a politician like Medvedev didn't notice the camera was running while saying this to a reporter. What does it tell you when a Premier of one of the most powerfull  countries in the world admits alien existence ànd having instructions on how to handle contact with ET 's? Politicians like Medvedev make no accidental mistakes like this!  It looks like Russia takes the lead in Disclosure. They waited already too long for Obama.

Meanwhile, in the USA there will be a socalled Citizen's Hearing from 29th april - 3th of may 2013 before members of Congress.  It is a group of 40 researchers and witnesses from the military and intelligence community who are about to testify.

Also this year, apart from the traditional economic concerns, the program of the World Economic Forum in Davos is scheduled to address a number of highly controversial issues- socalled X-Factors- which have been kept classified for decades. Dimitri Medvedev has planned to be there.