The Earth’s Magnetic Poles Are Shifting 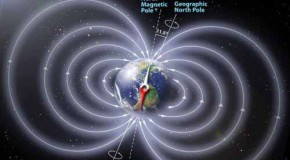 
I’m sure that many of you have heard the ‘concept’ that the Earths magnetic poles (North and South) are shifting, or that some kind of a rapid pole shift is going to occur.


A pole shift is when the Earth’s magnetic fields switch places, so that the North Pole is now in the South, and vice versa. This is no longer a concept, but an actual fact. Some of us may have been led to believe that the poles would rapidly shift on December 21st, 2012. Obviously, this theory was untrue. However, the poles are shifting and have done so many times in the past, but the theory that the poles could shift instantly at any moment is just that, a theory.

The Earths magnetic poles reverse every 200,000 to 300,000 years, and a complete reversal usually takes thousands of years to complete. Although, it has been twice that long since the poles have last reversed. Scientists now say that the poles are shifting at a rate of 40 miles per year, which is actually quite a long distance if you think about it, but maybe not that much when you think of how big the Earth really is. In my own opinion I think that this definitely has something to do with the climate change that has been happening over the past few decades. When I say Climate change I do not mean ‘Global Warming.’ I mean climate change. Remember it did snow in Rome for the first time in 40 years last year!

Research suggests that this shift in the magnetic poles could very well be a factor in what has been causing the increased number of earthquakes, hurricanes and tsunamis that have been frequently happening around the world. Another potential factor for these weather and Earth changes that is often talked about is the increased use of HAARP. (High Frequency Active Auroral Research Program.) Which presumably can magnify and direct some of this sever weather.  It would make a lot of sense considering that these poles are moving pretty quickly, but it appears it has not been fully proven up to this point. There have been many so-called ‘prophets’ in the past that have predicted these extreme cases of weather. How did they know? Is it because of the ancient evidence that proves that these pole shifts have occurred?

”Weather patterns will change dramatically all over the world. The winter months will be colder and in many areas wetter. The ocean currents will be changing, and the magnetic fields of the Earth will be moved about. The animals on the land and in the sea will be dying off in great numbers…” - Mother Mary
“…the polar regions were once turned to where they occupied more of the tropical and semi-tropical regions.” – Edgar Cayce
“The last half of the twentieth century will see much seismic and volcanic activity. Atmospheric disturbances will increase… and destructiveness as the century draws to a close.” - Richard Kieninger

I feel this is may be Gaia’s way of cleansing herself. Yes, there have been some devastating events that have occurred that may or may not be the result of the shifting poles, but this is a great time of change and transformation, for us, and our beautiful planet Earth. There is nothing to be afraid of as deep down we know we will be where we need to be should we need to experience something. This may also serve as a wake up call to the planet collective as it appears we are in need of one.